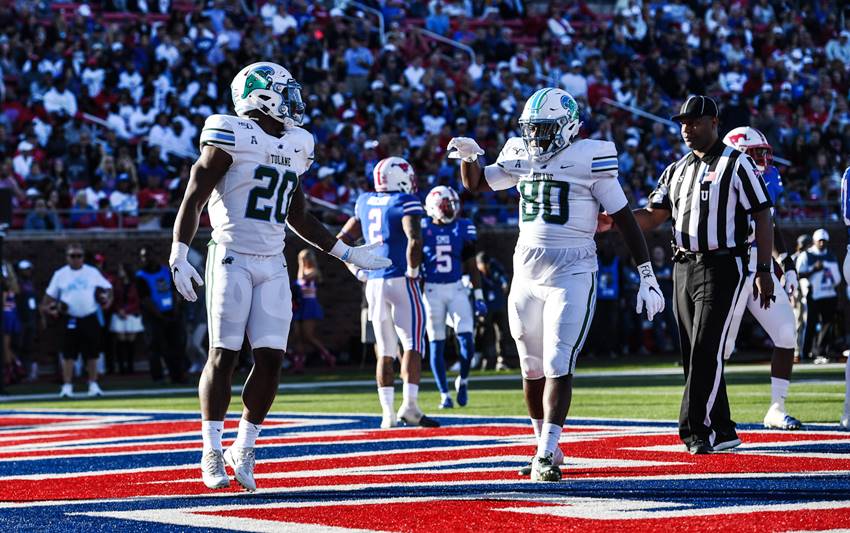 With the loss, the Green Wave dropped to 6-6 on the year. Tulane out gained SMU 465-377 and rushed for over 200 yards for the ninth time this season. The Green Wave finished the game with 223 yards on the ground.

In his final regular season game as a starter, senior quarterback Justin McMillan threw for 242 yards and rushed for 50 yards.

SMU jumped out to an early 14-0 lead in the first quarter thanks to a pair of Shane Buechele touchdown passes.

The Green Wave responded at the end of the first quarter with a three-yard touchdown run by redshirt freshman running back Cameron Carroll, which capped a nine-play, 60-yard drive.

The Mustangs would extend their back up to 14 points at the 2:32 mark of the second quarter thanks to a one-yard touchdown by running back Xavier Jones to make the score 21-7. Tulane once again responded, as it marched 64 yards in 14 plays and connected on a 33-yard field goal as time expired in the first half.

Tulane held SMU scoreless in the third quarter and in the process trimmed the Mustangs lead to just four points thanks to a 35-yard touchdown run by redshirt senior Corey Dauphine. Dauphine’s touchdown was his seventh score of the season and his fifth rush of 30 yards or more.

The Green Wave threatened to score to close out the third quarter, but were unable to close out the drive from inside the 10-yard line and turned the ball over on downs. SMU would then go 93 yards in 13 plays to take a 27-17 lead with 10:23 to go in the game.

Less than three minutes later, SMU stopped another Tulane fourth down conversion attempt, which the Mustangs translated into seven points on their following offensive possession. Tulane finished the game 0-for-4 in fourth down attempts.

Both teams would go on to trade field goals over the final five minutes, as SMU secured the win. Junior Merek Glover’s 42-yard field goal was his third field goal from 40 yards-or-longer.

Up next, Tulane will await its postseason bowl selection. The Green Wave have not played in back-to-back bowl games since the 1979-80 seasons.

TEAM NOTES
• With the loss to SMU, the Green Wave dropped to 6-6 on the year, equaling their regular season record from a year ago.
• Tulane dropped to 13-13 all-time against SMU.
• The Green Wave have lost each of the past five meetings to SMU.
• The Green Wave outgained SMU, 465-377.
• Team captains for today’s game were QB Justin McMillan, WR Darnell Mooney, LB Lawrence Graham, S P.J. Hall, and DL De’Andre Williams.
• Freshman WR Jha’Quan Jackson carried the New Orleans flag. Freshman running back Tyjae Spears carried the American Athletic Conference Power 6 flag.
• Senior CB Thakarius Keyes carried the No. 18 flag in honor of Devon Walker.
• With the loss, head coach Willie Fritz fell to 215-101-1 all-time. Fritz owns a 41-27 mark in the month of November.

OFFENSIVE NOTES
• The Green Wave offensive starters were QB Justin McMillan, RB Darius Bradwell, TE Will Wallace, TE Tyrick James, WR Darnell Mooney, WR Jalen McCleskey, OL Sincere Haynesworth, OL Keyshawn McLeod, OL Corey Dublin, OL Christian Montano and OL Joey Claybrook.
• Mooney made his 40th consecutive start, while Dublin made his 37th straight start.
• With its two rushing scores, Tulane now has 33 touchdowns on the ground this year, which is tied for second all-time in a single season.
• Tulane has now scored points in 39-of-47 quarters this season.
• The Green Wave offensive unit was 2-of-4 in the redzone today. Tulane has converted 39-of-44 attempts in the redzone this year.
• Tulane finished the game with 223 rushing yards. The Green Wave have now surpassed 200 yards rushing in nine of their 12 games this season.
• The Green Wave have now rushed for 2,998 yards on the year, which ranks second all-time.
• The Green Wave have now surpassed 100 yards rushing in 52 straight games.
• McMillan finished with a game-high 242 yards passing.
• Redshirt senior Corey Dauphine rushed for his seventh rushing touchdown of the season and the 14th of his career, as he dashed in from 35-yards out. Dauphine has five rushes this season of 30 yards-or-more.
• Mooney extended his consecutive catch streak to 31 games, as he hauled in a game-high seven receptions. He finished the game with 53 yards.
• With his 53 receiving yards, Mooney surpassed 2,500 yards for his career at Tulane. He is one of just six Tulane players to surpass 2,500 career receiving yards in program history.
• With his four receptions, graduate transfer Jalen McCleskey surpassed 200 career catches. He finished the game with 49 yards receiving.

SPECIAL TEAMS NOTES
• Junior Stephon Huderson finished with 73 kickoff return yards.
• Redshirt junior Merek Glover connected on both of his extra point tries. Glover is a perfect 48-of-48 in extra points this season.
• Glover also connected on field goals from 33 and 42 yards out, but missed from 32 yards out. Glover has now connected on three field goals from 40 yards-or-more this season.
• Sophomore punter Ryan Wright had two punts for an average of 45.0 yards.