The stage was set.

There was a Yulman Stadium record attendance of 30,118 on hand. With revenge in mind, the favored Green Wave set out to prove that they were the better team, which was not the case less than a month ago.

John Rhys Plumlee passed for 132 yards and a touchdown and rushed 18 times for 180 yards and two touchdowns when UCF defeated Tulane 38-31 on November 12 at Yulman Stadium. The Knights won big up front, rushing for 336 yards and four scores.

The Knights returned to the scene of the crime Saturday.

This time around, the Green Wave laid down the law to prevent a repeat offender, getting downright offensive in a 45-28 victory to win the American Athletic Conference Championship and earn a likely bid to the Cotton Bowl.

This time around, an injured Plumlee passed for 209 yards and a touchdown but was held to nine carries for minus seven yards.

In virtually any football game, when you lose the turnover battle, especially by a margin of three, you are going to lose.

That is how much better Tulane was than UCF today.

With everything on the line, Michael Pratt played like a champion in perhaps his best performance.

Pratt completed 20 of 33 passes for 394 yards with four touchdowns and an interception. Pratt added six carries for 48 yards in a fifth touchdown.

Shae Wyatt was outstanding with five catches for 110 yards and two touchdowns.

Then, there is Tyjae Spears.

The top offensive player in the conference played like it.

Despite losing a fumble, Spears was brilliant again, rushing 22 times for 199 yards and an electrifying 60-yard touchdown in one of the best runs by any running back in college football this season.

Tulane jumped out to a 10-0 lead and expanded the lead to 24-7 in the third quarter.

It was 31-14 in the fourth quarter before Plumlee rallied the Knights, who took advantage of Tulane mistakes to cut the deficit to 31-28 with 9:48 to play in the game.

It was nervous time.

Desperately in need of a good possession, Pratt made sure of that with a key third-down conversion pass to Jha’Quan Jackson.

Tulane finished it off as Pratt ran left on a good read, broke a tackle and raced 18 yards for a touchdown to complete the scoring.

When faced with adversity, Tulane responded like a champion and became a champion, completing a whirlwind week which started with the very strong possibility that its highly successful coach would depart.

Instead, Willie Fritz got a new start and hopefully, he has started a new tradition at Tulane, one of winning consistently.

That has not been the case for the Green Wave in a long, long time.

With Fritz in the fold, with a new American Athletic Conference alliance next season and with enthusiasm and momentum built in recruiting, Tulane is positioned well.

Finishing his seventh year, Fritz clearly wants to see improvements made to facilities and a firmer commitment by the university to provide him with a chance to create a better chance to produce a consistent winning program.

If that is going to occur in any fashion, now is the time, with Tulane heading to a major bowl game.

The story is already a tremendous one, a program rebounding from a 2-win season plagued by a hurricane, displacement and despair to post 11 wins and to create genuine fan interest for the first time in a very long time and that includes student interest.

In my lifetime, that was the high water mark for Tulane football in terms of greatest moments and the greatest home victory.

The Green Wave ended 25 years of futility against the Tigers on that night. The energy, the excitement was awesome to behold.

The funniest banner of many in the stadium that night read, “LSUNO backs Tulane.”

That was well before LSUNO became the University of New Orleans.

While that may always remain the chalk for long-time Tulane fans, today’s victory, at a much smaller stadium with a much smaller crowd, clearly ranks with the 1973 triumph.

The story can be even greater if Fritz and his fine staff remain and get some additional assistance from the university. 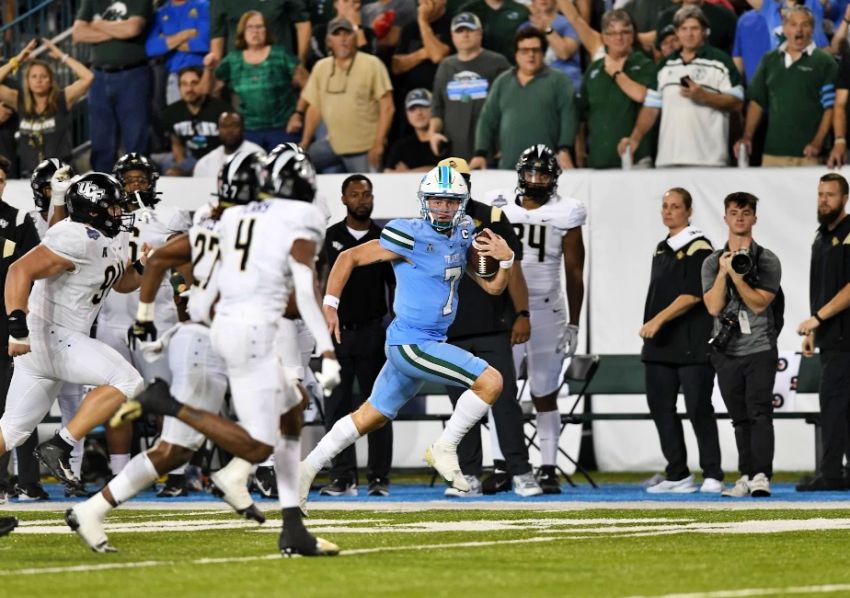 The last thing Tyjae Spears said when he walked out of Nippert Stadium in Cincinnati last week was “and we’ll win the next one, too.” The Green Wave backed up what he said Saturday.