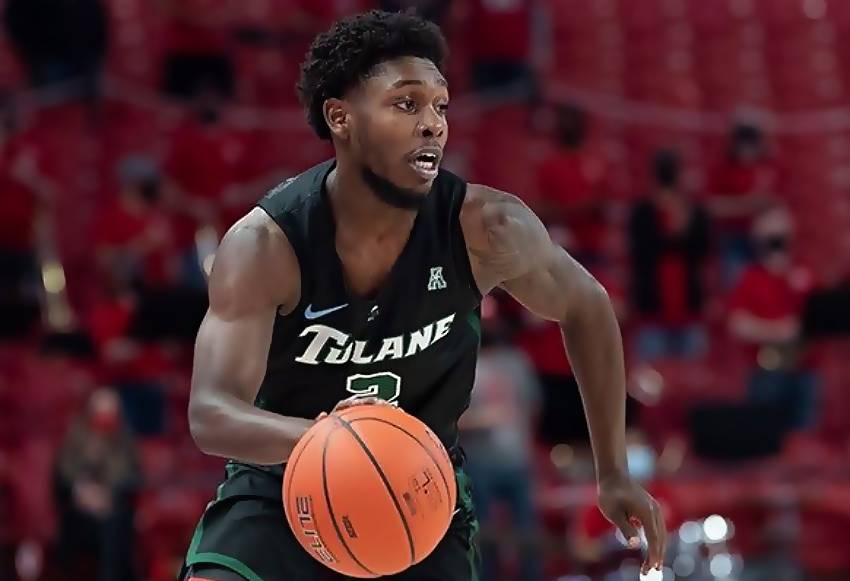 FORT WORTH, Texas – Jordan Walker scored 20 of his game-high 24 points in the second half to lead the 10th-seeded Tulane men’s basketball team to a 77-70 win over No. 7 seed Tulsa in the first round of the 2021 Air Force Reserve American Athletic Conference Championship on Thursday afternoon at Dickies Arena.

Tulane (10-12) advances to face No. 2 seed and seventh-ranked Houston (21-3) in Friday’s quarterfinal round. Tipoff is scheduled for 6 p.m., and the game will be televised nationally on ESPNU. The Cougars won both regular season meetings against the Green Wave.

Walker’s 24 matched his career-high established in his Tulane debut on Nov. 6, 2019 against Southeastern Louisiana. He shot 10-of-17 from the field to go with seven assists and three steals. Jaylen Forbes scored 22 points with seven rebounds and three assists, as R.J. McGee matched his career-high with 15 points and seven boards coming off the bench.

“I’m really proud of our kids,” second-year head coach Ron Hunter said. “I said at halftime that this was probably a great game to watch. I thought it was very entertaining in that regard, but coaching that game was a dog fight. I thought Tulsa played really well and made some great adjustments against our matchup.”

Tulsa scored the first five points of the game, but Tulane turned up the defensive intensity and ripped off an 11-3 run to take a three-point lead after a pair of free throws by McGee at the 15:18 mark. That proved to be the first of 12 lead changes in the first half and the largest the Green Wave would have in the opening 20 minutes.

Neither team led by more than three points for the first 15 minutes of the game, as Tulane held its final advantage of the period, 28-27, after Jadan Coleman made both free throws of a one-and-one attempt.

The Golden Hurricane scored eight straight points to create its largest lead of the half, 35-28, with 3:29 remaining, but the Green Wave countered once more with six straight points capped by a Tylan Pope layup with 1:15 left.

The two sides exchanged 3-pointers inside the final 20 seconds, including a trey by McGee at the buzzer to cut Tulane’s deficit to just four, 41-37, heading into halftime.

The Green Wave chipped away at the deficit early in the second half by making five of their first eight shots to ignite a 7-0 run and reclaim the lead, 54-51, after a layup by Walker with 13:38 remaining.
The Golden Hurricane scored six straight points from that moment to pull back in front and held the lead until Walker took over the final six minutes of the contest by making Tulane’s final five shots from the floor.

A McGee trey at the 6:57 mark pulled the Wave back within one, 60-59, and despite a basket on Tulsa’s next possession, Walker responded with the first basket of his flurry to keep the margin at one. He scored a jumper in the paint with 4:57 left to put Tulane in the lead for good, 63-62.

Forbes connected on two free throws, before Walker completed his second three-point play of the day to cap a 7-0 run, extending Tulane’s lead to 68-62 with 2:53 remaining.

Tulsa crawled back within three, but two more baskets by Walker on consecutive possessions gave the Green Wave their largest lead, 72-65, with just 47 seconds to go. Tulane made five of six free throws n the final minute to seal the seven-point triumph.