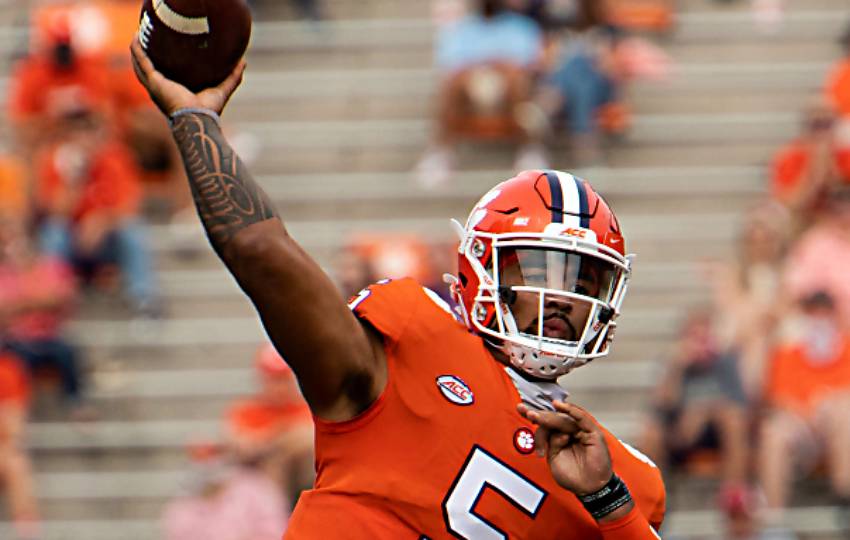 We took a trip around the SEC spring football happens recently. Now we check out the talent at some other major programs.

The Tigers completed spring drills on April 3. Starting quarterback D.J. Uiagadelei went 20-of-28 for 174 yards in the scrimmage finale.

Deshaun Watson currently holds the school record with 4,593 passing yards and 41 touchdowns passes set in 2016. Insiders feel Uiagadelei will eventually break that record. He had 439 yards passing while filling in for Trevor Lawrence receiver against Notre Dame.

The sophomore this fall will have some signficant weapons at his disposal.

Wide receiver Justyn Ross (6-4, 205, 4.4) was projected as a first round pick in the ’21 NFL draft but missed the 2020 campaign with a spinal fusion injury that required surgery. He is well on the road to recovery.

Speaking of injuries, backup quarterback Taisun Phommachanh tore his Achilles near the end of spring practice.

With running back Travis Etienne off the NFL, a pair of new faces have drawn attention.

The Clemson defense allowed only 20 points and 112 yards rushing per game last year. Plenty of talent returns for 2021.

Not a program in the past that you would mention in the same breath among elite programs, the bunch in Ames is hard to ignore now.

Head coach Matt Campbell ran a limited physical contact camp this spring. His thinking was to keep his troops fresh so that they could accomplish more injury free. In the past, the Cyclones were more physical in spring. The staff decided to dial it back, focusing more on physical and technical development.

Quarterback Brock Purdy returned after considering a jump to the ’21 NFL draft. The 6-1, 212-pound senior was the 13th best passer in the nation (2,750 yards, 15 touchdowns, 3 interceptions, completing 66.6 percent). He also ran for 382 yards and 5 scores. In part to good blocking and also his ability to move and deliver the ball, Purdy suffered only 14 sacks in ’20.

The spring game for the “Canes is April 17th. They face Alabama in the 2021 season opener in Atlanta at the Mercedes Benz Stadium.

Quarterback D’Eriq King, a Heisman candidate, sat out the spring recovering from a torn ACL in his right knee sustained in the Cheez It Bowl against Oklahoma State.

The Miami receiving corps is in good shape. Oklahoma transfer Charleston Rambo (6-1, 180, 4.3) had 43 catches for 743 yards and 5 touchdowns for the Sooners in 2019. He will be an immediate boost to the offense.

Tennessee transfer linebacker Deandre Johnson (6-3, 250) arrives after recording 28 tackles and 4.5 sacks for the Vols in ’20.

Strong safety Bubba Bolden (6-3, 200) was a Jim Thorpe Award semifinalist is 2020 after recording 65 stops, including 13 against North Carolina. Free safety Gurvin Hall (6-0, 195) wears jersey No. 26, in honor of Sean Taylor; he is looking to make his mark among the elite safeties in school history such as Taylor, Ed Reed and Bennie Blades.

Quarterback Spencer Rattler (6-0, 205) is among the Heisman favorites as well. He was the 2020 National Freshman of the Year after throwing for 3,031 yards, 28 touchdowns and 7 interceptions, completing 67.5 percent of throws.

The offensive line received some help this spring.

Right guard Tyreese Robinson (6-3, 335, Sr.) returns with 25 starts on his resume’ and only 2 sacks allowed in 400 passing plays last season. Another Tennessee transfer, tackle Wanya Morris (6-5, 330, Jr.), will plug in on the blind side where he started 19 games for the Vols. Former UCLA center Chris Murray (6-2, 296, Jr.) brings 24 career starts to OU where he will attempt to fill the role of Creed Humphrey.

Wisconsin transfer Jack Coan (6-3, 221) has taken over at quarterback for Ian Book.

Book was a three-year starter but the Irish still have experience behind center. Coan threw for 3,278 yards, 23 touchdowns and 8 interceptions at Wisconsin.

Tight end Michael Mayer has become a favorite target of the new quarterbacks. He tallied 42 grabs, 450 yards and 2 touchdowns as a freshman last fall. Some are calling him the next Kyle Pitts.

Jarrett Patterson (6-4 1/2, 305, Jr.) was the starter at center but has moved out to see if he can replace departed Liam Eichenberg at left tackle.

A 2021 signee, Blake Fisher (6-6, 330), has turned heads with superb feet and a high IQ for such a young lineman. OTosh Baker could be a star of the future at tackle. The 6-8, 300-pound redshirt freshman moves well with great balance.

New defensive coordinator Marcus Freeman arrives from Cincinnati. He will take advantage of some athleticism on that side of the ball. Senior safety Kyle Hamilton (6-4, 216) had 63 stops last season. He will be joined by senior safety Houston Griffith (6-0, 205), who entered transfer portal but decided to return.

After going a somewhat disappointing 8-4 in 2020, the Tar Heels return 18 of 22 starters including every defensive starter.

Quarterback Sam Howell is expected to shine this fall. He had 3,586 yards passing, 30 touchdowns and 7 interceptions last fall. He threw for 550 yards and 6 touchdowns against Wake Forest. The Heels paced the ACC with 41.7 points per game and 537.3 yards per contest.

Yet another Tennessee transfer, running back Ty Chandler (5-11, 21, 4.4), had 2,046 rushing yards and 13 touchdowns as a Vol. He is an excellent receiver as well but it will be tough to replace both star running backs, Javonte Williams and Michael Carter. The duo accounted for 87 percent of the Tar Heels rushing yards last season and had 28 of the team’s 35 rushing touchdowns.

Running back D.J. Jones (5-11, 205) has generated a buzz during spring. The sophomore missed the bowl game due to an ankle injury.

Junior defensive end Tomari Fox (6-3, 265, Sr.) missed spring drills with an injury. With 35 starts under his belt, he is one of the premiere pass rushers in college football. Last season, Fox had 7 sacks and 10.5 tackles for loss.