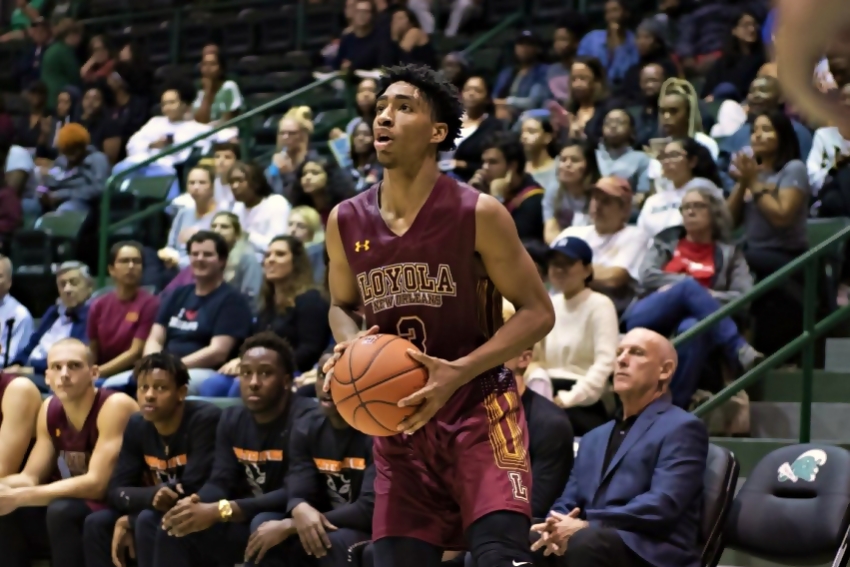 KANSAS CITY, Mo. – Loyola senior Myles Burns said it best in the locker room after the Wolf Pack’s 85-67 win over Faulkner in the NAIA National Championship Round of 16 in Kansas City, Missouri.

After a close first 15 minutes of the game, the Wolf Pack started to pull away from their Southern States Athletic Conference rival, and now they’ll turn their attention to No. 3-seed College of Idaho in the quarterfinals of the tournament. Tip-off is scheduled for 11 a.m. on Saturday at Municipal Auditorium.

It was Burns who got things started for the Wolf Pack, hitting a 3-pointer for the game’s first points. Faulkner, however, made five 3s in the first eight minutes to hold a 19-17 lead over Loyola. After a scoring lull for both teams, Andrew Fava gave the Pack a 20-19 lead with a 3-pointer, and Faulkner never held a lead after that point.

Zach Wrightsil and Burns combined for the next eight points and Fava nailed another 3-pointer, as the Pack led 30-25 with 4:30 until halftime. Burns recorded three rebounds in a 10-second span after that, which gave the senior a double-double with more than three minutes until halftime. Terry Smith Jr. scored for Loyola and Jalen Galloway added a 3 to make it a nine-point lead, 35-26, and a dunk by Burns made it a double-digit lead, 39-28, with two minutes left.

Faulkner had trouble making up any ground on the Pack, as the Eagles hit a 3 in the early going but Zach Muller matched it with one of his own on Loyola’s end of the floor, 51-33. Brandon Davis finally got on the board, too, hitting a 3 as well to put the Pack up 54-35 just two minutes into the second half. After Galloway converted a steal into a fastbreak dunk, Faulkner scored the next eight points to cut Loyola’s lead to 11, but that would be the closest it could get to Loyola.

Burns scored the next five points, including a 3-pointer, to regain the momentum halfway through the second half, then Smith, Wrightsil and Muller made it an 11-0 run for Loyola to quickly push the lead back to 22, 73-51, with nine minutes left. From there, Loyola cruised to the win with the two teams matching each other shot-for-shot down the stretch.

PACK FACTS
– This is the second consecutive season in which Loyola has reached the quarterfinals of the NAIA National Championship.

– Myles Burns finished with 24 points, 17 rebounds, and four steals, leading the team in all three categories for his 14th double-double of the season and 49th of his career. Seven of his boards were on the offensive end.

– Burns set a new single-season steals record for the Southern States Athletic Conference. He now has 140 steals this season, more than any other SSAC player since the conference was founded.

– Brandon Davis dished out four assists against Faulkner, giving him 149 on the season. That’s a new school record for assists in a season, passing Tim Cameron, who had 147 dimes in the 2019-20 season.

– Burns is also moving up in Loyola’s single-season records. He’s now 17th in points with 513 this season, and he’s fourth in rebounds with 290. Burns holds the all-time season rebounds record with 290, which was set in the 2018-19 season.

– Loyola out-rebounded Faulkner 47-33 for the game. The Wolf Pack finished with 22 offensive rebounds, with 16 of those coming in the first half.

– Zach Wrightsil finished with a stat line of 18 points, eight boards, four assists, and a steal. Loyola’s all-time scoring leader is now over 2,100 for his career with 2,103 total points.

– Five different players scored in double figures for the Wolf Pack. Andrew Fava had 11, while Terry Smith Jr. and Jalen Galloway each contributed 10.

– Fava moved up on Loyola’s single-season three-pointers list. He now has 87 triples this season, which is the fourth-most in Wolf Pack history and just one shot behind third on the list.

WOLF PACK HEAD COACH STACY HOLLOWELL
On playing Faulkner for a third time this season:
“It was unnerving for us coming off that last game. It’s easy to think that we’re going to walk through it. I know Coach Sanderson and I know that group of players, those are tough guys. It’s big for us. It was the scariest part about coming here having to play somebody who we’ve played a few times. Just keep the pedal to the metal and keep it going.”

No. 1 Loyola (La.) advances to the quarterfinal round and will face No. 3 College of Idaho on Saturday, March 19 at 11:00 a.m. CT. No. 4 Faulkner (Ala.) has been eliminated from the championship.

–       They split regular season meetings with Faulkner in Southern States Athletic Conference play.  Suffered only loss on January 17, 92-73 and defeated Faulkner, 121-69, on February 5.

–       Myles Burns recorded his twelfth double-double on the season.

KANSAS CITY, Mo. – [Schedule | Bracket] William Jessup (Calif.) and Indiana Wesleyan provided late fireworks down the stretch as day one of the 2022 NAIA Men’s Basketball National Championship wrapped in Kansas City. The Warriors prevailed behind 16, three-pointers and was the only lower-seeded team to advance. Top-seeded Loyola (La.) advanced to play on Saturday along with College of Idaho and Arizona Christian.

Game 1 – College of Idaho vs. Grace

–       The eight first half points for Ivory Miles-Williams are the most this season for the senior.

–       Elijah Malone (18 points, 9 rebounds) came up one rebound short of what would have been his ninth double-double.

–       Grace came into the National site as the lowest seeded team to advance to the third round (7 seed).

–       They split regular season meetings with Faulkner in Southern States Athletic Conference play.  Suffered only loss on January 17, 92-73 and defeated Faulkner, 121-69, on February 5.

–       Myles Burns recorded his twelfth double-double on the season.

–       The Firestorm improved to 7-6 all-time at the NAIA National Championship.

–       Five players scored in double figures in the victory, with Dennis Flowers III leading the team with 16.

–       Robby Wilson had a game-high 13 rebounds and finished with a double-double with 11 points.

–    This marked the 13th time this season, the Firestorm have scored 82 or more points in a game.

–       This marked their fourth appearance at the NAIA National Championship and are now 4-3 all-time at the event.

–       Indiana Wesleyan had 10 steals and eight blocks in the contest.

–       The Warriors had three players finish with 10 or more rebounds, Tarren Storey-Way with 10, Charlie Garrison with 11 and Tim Strijaous with 12.