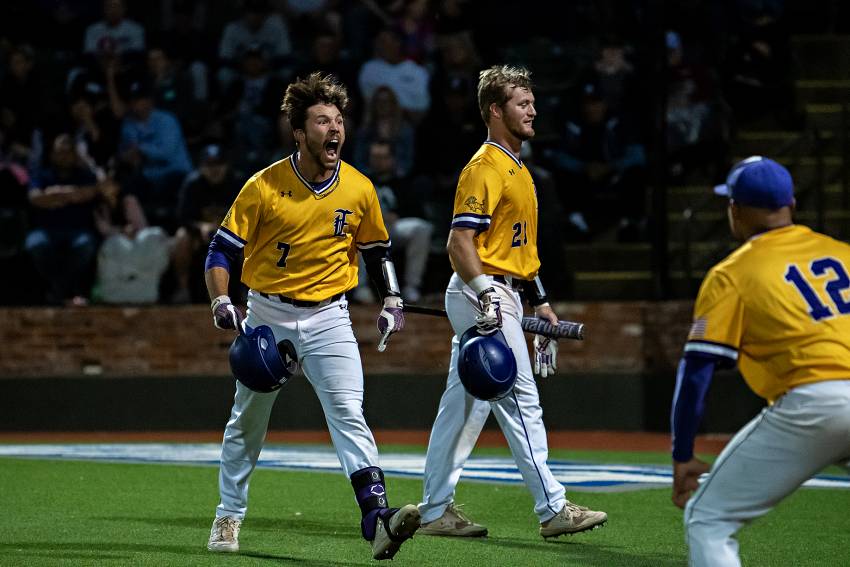 ENID, Oklahoma – In front of nearly a capacity crowd at David Allen Memorial Ballpark, top seed LSU Eunice made a convincing opening statement for its World Series stay. The Bengals (47-6) used a complete game from Jerry Couch and late offensive fireworks to score a 9-1 victory over Phoenix College in seven innings on Sunday.

It was the Bengals’ 18th run-rule victory of the season.

Jerry Couch and the LSUE defense was the story early as LSUE held Phoenix at bay with a 2-0 lead through four innings. Couch retired the side in order in the second and fourth innings behind terrific defensive plays from the middle infield. Brady Hebert started the game with a pirouette up the middle on a ground ball while Jack Merrifield saved a run in the third with a diving back handed play on a sharp line drive.

Couch tossed a complete game, scattering one earned run off three hits and two walks. The sophomore improved to 11-1 on the campaign with three punch outs including one in a perfect final frame.

LSUE took the lead for good in the second inning as Bryce LaRocca launched a two-out missile to left field with a solo home run. Jarrett McDonald added another run in the third with a RBI triple.

After Phoenix cut the lead in half with a manufactured run in the fifth, it was LaRocca that again answered the challenge. LaRocca muscled a RBI double, sparking a five-run sixth inning for LSUE. McDonald again tag teamed with LaRocca as the sophomore provided a two-run single later in the inning.

After Peyton LeJeune put LSUE within one run of a mercy rule win thanks to a RBI single, Jack Merrifield helped the Bengals walk off with a grounder to short allowed Brady Hebert to score the game winner.

LaRocca tied a season-high with a three hit night, driving in a pair and scoring three times. McDonald and LeJeune also had multi-hit games in the Bengals 10-hit output.

LSU Eunice turns its attention to Kellogg CC for a winner’s bracket matchup on Monday at 4:00PM. The Bengals and Bruins are no strangers to each other, having met the last 12 years in an early season series in Eunice.

Fans can watch the game online on the NJCAA Network, follow along on the NJCAA live stats feed or listen on the CTB Sports App on Android or iOS devices.