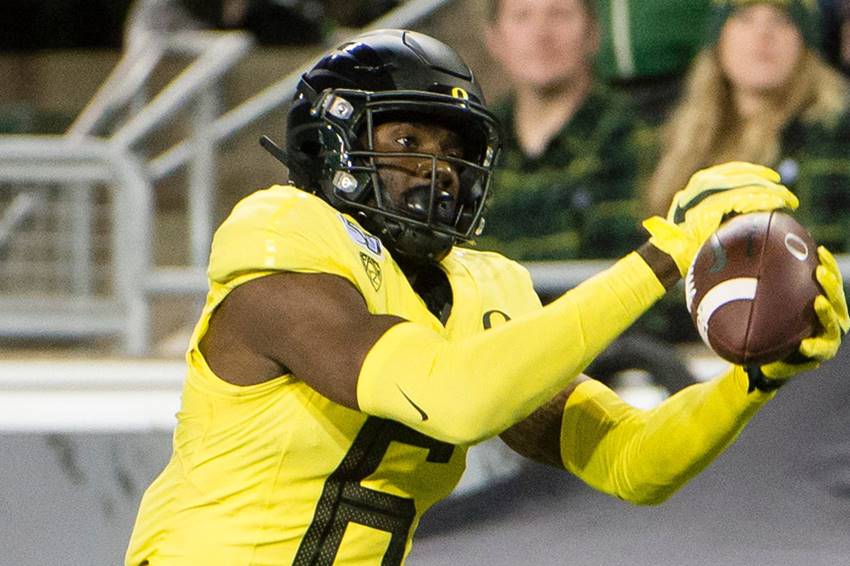 Every undrafted free agent has a main reason for selecting his first NFL stop. For one, having familiarity with a franchise certainly helps with the transition.

Juwan Johnson may be one of the best bargains among undrafted free agency pickups this year. The 6-foot-4, 230-pound wide receiver was projected by some to be chosen in fifth or sixth round.

A big bodied target and a capable blocker, Johnson draws comparisons to former Saints undrafted free agent tight end Dan Arnold. Like Arnold, Johnson did not gave his name called in the draft.

Johnson immediately considered the New Orleans Saints after getting a strong recommendation from his older brother George, a former defensive end who spent eight seasons in the league. One of George’s stops was with the Saints in 2017. He gave his younger sibling a ringing endorsement.

“He told me a lot,” Johnson explained. “He genuinely fell in love with the place, the people, the whole environment, the whole community. I was there when they were hosting a wild card game against the Carolina Panthers. Being in that atmosphere was crazy. It had college vibes. Everyone there is a fanatic for the Saints. He really loved it, so I know I’ll fall in love with it, too.

The common thread between the two Johnson brothers was that both went undrafted.

“Yeah, it’s kind of the same way,” the hopeful rookie stated. “Kind of funny, it just keeps us closer. He can show me the ropes, the in’s and the out’s of what the NFL is. Not being drafted put a chip on his shoulder. We like to prove people wrong.”

As a sophomore at Penn State in 2017, Johnson grabbed 54 passes for 701 yards and one touchdown. It was a memorable score to say the least. His final play grab in the back of the end zone gave Penn State a thrilling victory at Iowa.

The following campaign, Johnson suffered nagging injuries. At the end of 2018, Nittany Lions starting quarterback Trace McSorley graduated while backup Tommy Stevens was planning to transfer. It prompted Juwan to bolt Happy Valley and land at Oregon as a grad transfer. The big draw to the Ducks was his relationship with head coach Mario Cristobal, who recruited him for Alabama five years earlier.

“It made me better personally,” Johnson said regarding his time with two Power 5 programs. “I learned things at Penn State that transformed me as a man and as a player, likewise for Oregon. Being in the atmosphere at Oregon helped me change as a person and definitely as a student of the game, based on that offense. Things that I’ve never heard before, different terminology. It’s the same type of terminology with the Saints offense. I’m glad that I made the switch. I have great respect for both programs.”

The Saints have a history of success with undrafted free agent receivers. Willie Snead, Michael Lewis, Rich Mauti, Tommylee Lewis and most recently Deonte Harris have gone on to prove their worth in the NFL. All capitalized on the opportunity to play special teams as a way to earn their keep.

George told Juwan that special teams could be his ticket to a job in the Crescent City. The younger Johnson embraces the notion.

“That is a way of trying to make your name, special teams, if you don’t run a 4.3. I’ve played special teams at both Penn State and Oregon. I will in the NFL as well. It’s also a way to work your way into the offense, if you continue to do what you’re supposed to do.”

Saints special teams assistant Phil Galiano was the special teams coordinator at Penn State in 2017-18, where he recognized Johnson’s skills to contribute.

“I’ve talked to Coach Galiano. I think that was a big plus coming in, being one of the special teams guys that they wanted. They want me to just come in and make an impact whether it’s special teams, receiver or tight end. I didn’t care where it was. I just want to make an impact.”

As a big target who may be used as a hybrid receiver, Johnson may end up spending even more time with the aforementioned quarterback Stevens, a former teammate and roommate when both were with the Nittany Lions. New Orleans drafted Stevens out of Mississippi State in the final round. Johnson feels brighter days are ahead for both.

“He’s awesome. We both worked tirelessly. What you see in me is the same that you’re going to get out of him. We’ve gone into the facility and worked out until one o’clock in the morning. That’s the type of work (both) put in. We both have just scratched the surface.”

Needless to say having a close bond with another rookie trying to make the team is encouraging to Johnson.

“He is still one of my best friends. We talk a bunch. He has loved this experience so far. He loves being a Saint. He loves the fans already.”

Johnson has size with good speed for his build (4.58) that may make him a developmental tight end convert. His speed would serve as an advantage against linebackers and safeties. Whether he has to learn a new position or not, Johnson knows every rookie begins at square one.

With that mindset, don’t count Juwan Johnson out. He may just be the next undrafted Black and Gold gem.