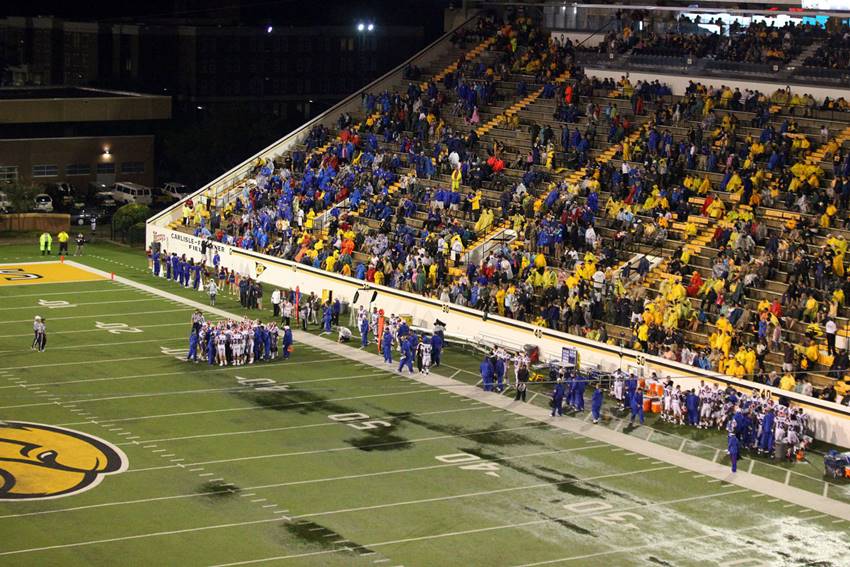 RUSTON – A storm brewing in the gulf. And its football game week with Louisiana Tech set to battle Southern Miss.

As Hurricane Sally slammed into the Gulf Coast on Wednesday morning, she decided to make a sharp right into Alabama and Florida and not visit M.M. Roberts Stadium in Hattiesburg.

Her long-lost cousin – Tropical Storm Lee – was attendance though on Sept. 3, 2011 when the Bulldogs were opening up the season against the Golden Eagles.

Lee seemed to come out of nowhere, starting out as a cloud mass before developing into a Tropical Depression. By gameday eve, he earned his name by forming into a Tropical Storm and churned northward readying to drop heavy rainfall over southern Mississippi.

Not many others joined him for kickoff on that deep, dark Saturday night because of the deluge that befell on Carlisle-Faulkner Field, turning the field turf into a 100-yard slip-and-slide that was ultimately won, 19-17, by USM thanks to its placekicker somehow, someway making a game-winning 49-yard field goal.

For those who did attend and stick it out, it was a memorable tale worth revisiting as the two teams head for an early-season collision this Saturday.

Football radio color analyst Teddy Allen is gearing up for his 10th season on the airwaves with Hall of Famer Dave Nitz. A now-seasoned vet with the headset on, Allen was a nervous rookie preparing for his football call on that Saturday night.

“We got to the stadium really early and we were grinding and studying before the game. People were trying to talk to us, but they didn’t realize that I was frightened. I asked Dave if he could give me any pointers and he said, ‘Well, if you shake your head or something, they can’t see that on the radio so make sure you talk.’”

That was the only guidance Allen got from Freeway Dave who was about to call his first ever game that he never actually saw.

“Dave had to watch the game from the jumbo board because you couldn’t see very well with the glass fogging up and with all the rain. I looked for little pockets of places to see through the glass and ended up turning my hat around and pressing my forehead against the glass to see the game so I could point out stuff to Dave.

“A guy came along with a squeegee and he squeegeed off the press box windows. They must’ve fired the squeegee guy or he was just on partial scholarship because he was gone after the initial wipe.”

With the “Dogs After Dark” kickoff time of 9 p.m., it gave fans extra time that day to decide on whether to make the four-hour drive from Ruston through the storm to watch in person or to hang back and watch it on TV.

LA Tech alum Brian Wyatt and friends were some of those fans.

“We were at Dawghouse that day hanging out, and the entire time we were contemplating on whether we should go to the game or not. We were trying to figure out the latest possible time we could leave and still make the game. We finally decided to just go and take our chances.

“It was raining pretty hard on the drive down, but I don’t remember it being too unsafe. We were planning on going early to tailgate and walk around the campus.”

Making it to Hattiesburg, Wyatt and Co. had just enough time to check into a hotel, put their stuff down and make it to the stadium prior to kickoff.

“We were fully prepared otherwise, wearing rain gear and ponchos. There weren’t as many Tech fans with us in the stands because of the weather. We were small, but vocal. Looking back, we made the right call to go.”

Former Bulldog defensive back Chad Boyd is now a teacher and assistant football coach at his alma mater Archbishop Shaw High School which sits across the Mississippi River from New Orleans.

His students will ask him all the time about old college football stories. One of those stories he shares is how he played in a Tropical Storm.

“We had gusts up to 40 miles per hour. There was so much water on the field, you could see the ripples. I tell the kids how I had to switch out my low-top cleats for some mid-tops so that the water couldn’t get into my shoes as easily. I know I got taped up at least three times just because the water gets inside the tape and then it’s useless. Had to throw away my gloves because they didn’t work. So, so wet. Been in plenty cold, been in plenty hot, but that was one of the oddest conditions I’ve ever played in.”

Boyd, a two-time All-WAC selection at safety, was synonymous with making big hits. One he remembers vividly was put on a Golden Eagle running back.

“I loved to hit people. I always felt I was better against the running game than the passing game so from a raining aspect, I got happy because I knew there weren’t going to be a lot of passes. It was going to be an old-school football game.

“Everybody likes to talk about the hit I had on the guy at LSU, but I tell people all the time I had much harder hits. And at Southern Miss, they did a draw play up the middle and I put a good one on their running back. It almost knocked me out as well. I remember having a massive headache after that game.”

Despite the loss, there were some other big moments for the ‘Dogs that game. You had Lyle Fitte’s 86-yard kickoff return for a touchdown. You had Quinton Patton showing off his skills in his Bulldog debut, catching five passes for 95 yards.

And you ultimately had the makings of a team that would go on to win the Western Athletic Conference, coincidentally claiming the title in the rain in the regular season finale against New Mexico State.

There is currently just a 10 percent chance of rain for this Saturday in Hattiesburg so things should be a wee bit drier this time when the Bulldogs and Golden Eagles face off at 6:30 p.m. on ESPN2.