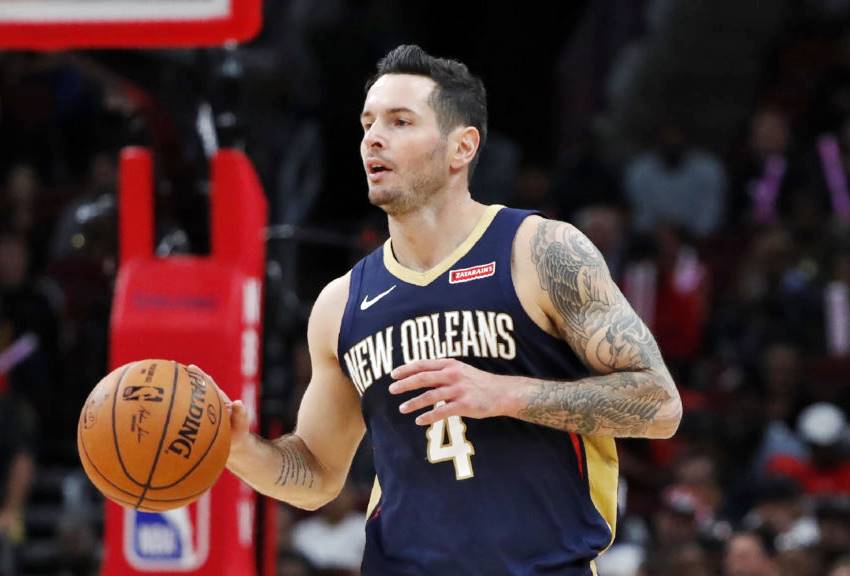 Today, is, after all April Fool’s Day.

The song and the movie were titled “Fools Rush In.”

Halloween is long gone but are we in for a trick or in for a treat with Lonzo Ball in the fold and JJ Redick gone?

The former is all about the mindset of Ball and the remainder of the New Orleans Pelicans roster and what it will look like by next year, when Ball becomes a restricted free agent.

Ball said all of the right things after not being traded and I, for one, believe him and there is no reason to not take him at his word.

Ball wants to be here.

He is friends with Brandon Ingram.

He loves playing with Zion Williamson.

He likes the team and the city and seems to have a good relationship with Stan Van Gundy.

Ball is eligible for a five-year deal but will the Pelicans invest that deep into a player that is not even playing the point for them?

Ball is likely to command at least $20 million per year.

Is that too rich for David Griffin’s taste?

Is Ball worth that?

The questions are legitimate and will remain until the issue is settled.

Magic Johnson loves Ball and thinks is the most creative point guard in the league.

Of course, he is not playing point guard much of the time in New Orleans.

Who cares? So what?

Kudos to Magic and brickbats to LaVar but in the grand scheme, neither of their opinions matter.

The opinions that matter are those of Griffin and Van Gundy.

Is Ball the third wheel needed to grow a maturing nucleus into a championship contender or not? Would he be best served as a good fourth wheel on a true championship team?

Of course, the Pelicans are playing well without Ball, presently, but imagining a starting backcourt of Ball and the long, improving Nickeil Alexander-Walker is intriguing.

The Pelicans are short on the wings and out front and struggle defensively. The two are tied together.

The Ball and NAW pairing brings a much longer defensive look on the perimeter.

Add the quickness, ball-hawking ability and speed of talented Kira Lewis Jr. and you would have a very good three-guard rotation for several years to come.

Of course, that excludes Eric Bledsoe.

While no one would take Bledsoe’s contract off of the books of New Orleans at this point, it is clear that Bledsoe would like to be elsewhere and the Pelicans should be clear in clearing the deck for Ball, Alexander-Walker and Lewis to play.

The minutes for all certainly increased and improved with the trading of JJ Redick.

The good side of Redick is that he was a team guy, a leader, a solid veteran presence.

He did not play well this season.

He wanted out but New Orleans did not have much in the way of options of dealing him.

The he said, she said banter emanating from Redick on his podcast after the trade to Dallas was intriguing but, in the final analysis, who cares and so what?

Perhaps Griffin told him he would deal Redick or try to deal him closer to home to a northeast team.

Even if Griffin did so, you must still have the desired trade partner who would desire the services of a player who turns 37 in June, in his 15th year in the league, who is having a bad year.

Perhaps time has caught up with Redick. Maybe it is a prolonged slump.

Either way, it does not matter. He was not an asset to the current Pelicans, given the makeup of the roster and the fact that the young guards have to play.

Redick is averaging 8.7 points per game, down from 15.3 points a year ago.

Those number are not just a reduction but a dramatic drop-off.

Perhaps Redick has hit the wall, maybe not.

Either way, the move to trade him at least netted New Orleans something in return, whether or not the Pelicans get anything out of James Johnson, Wes Iwundu and the second round pick in the deal.

That was the option, as opposed to Redick being bought out.

In this day and age where players are now wielding more power in where they play in professional sports, one can understand the angst of Redick.

Wanting to be close to family is a good, make that a very good thing and quality to possess.

In the world of professional sports where employees make many millions annually, one cannot feel sorry for Redick.

Of course, if you are Mark Cuban and Rick Carlisle, you have an injured, elderly player performing at a far lower level than normal who clearly doesn’t want to be in Dallas. Good luck with that.

Meanwhile, Ingram came through in the clutch in a win over the Mavericks and Williamson is playing like a top five player in the league and getting better. It is exciting, refreshing to watch.

While soap operas are mostly a thing of the past, the daily drama will continue for the Pelicans as to how to best adjust a flawed but talented roster while trying to keep players happy, on the same page.

The praise will continue to be heaped on Williamson and should be.

The young man is handling it well.

As Sean Payton is apt to say frequently, “don’t eat the cheese.”

The last day or two has truly been all in a mouse’s night, coming out in the dark, snooping around, seeking the cheese.

Let the mouse have it.

As for Zion, Ingram, Ball, NAW, Lewis, Josh Hart, Jaxson Hayes and company, keep sawing wood, as the late Jim Finks was apt to utter regularly. Hard work will pay off, if you have talent.

There is talent in New Orleans.

Now, let us see how it meshes together to see if this team can win more than three straight games in this wildly inconsistent season.

As to how Griffin and Van Gundy handle the roster and payroll, Thomas Tusser stated, “A fool and his money are soon parted.”

New Orleans fans are hoping the fool emerges elsewhere, not here, so there is no April, May or June fool, for that matter. Here’s wishing them the very best of luck.