It was a big Saturday for players from universities in Louisiana to wrap up the 2020 NFL Draft.

In all, 10 players from our state were drafted, including four more from LSU and two each from Tulane, Louisiana Tech and the University of Louisiana at Lafayette.

Two more LSU players went in the fourth round.

Offensive tackle Saahdiq Charles was the second overall pick in the round, chosen by the Washington Redskins. The 6-foot-4, 321 pounder is tough and has quick feet and moves well for his size.

Charles started nine games in LSU’s national championship season of 2019 but he missed six games for disciplinary reasons, which have hurt his stock slightly.

a New Orleans native whose family was displaced by Hurricane Katrina, he started games at three different positions as a freshman and earned All-Freshman honors in the SEC. He started 10 games as a sophomore, missing three games due to injury.

A nimble athlete for his size, Charles quickly received a new teammate later in the fourth round with the Redskins taking quarterback Jacob Eason of Washington.

Eason is huge (6-6, 221) and can certainly see the field. He has a big arm and can throw the deep ball. He started at Georgia, suffered an injury and transferred to Washington after Jake Fromm replaced him and had success and kept the starting job.

Able to move pretty well for a big man, Eason’s game is not about elusiveness. He will have to work on accuracy in the intermediate passing game but there is clear ability in his game.

The 12th LSU player to come off the board was Rashard Lawrence, who went in the fourth round to Arizona. 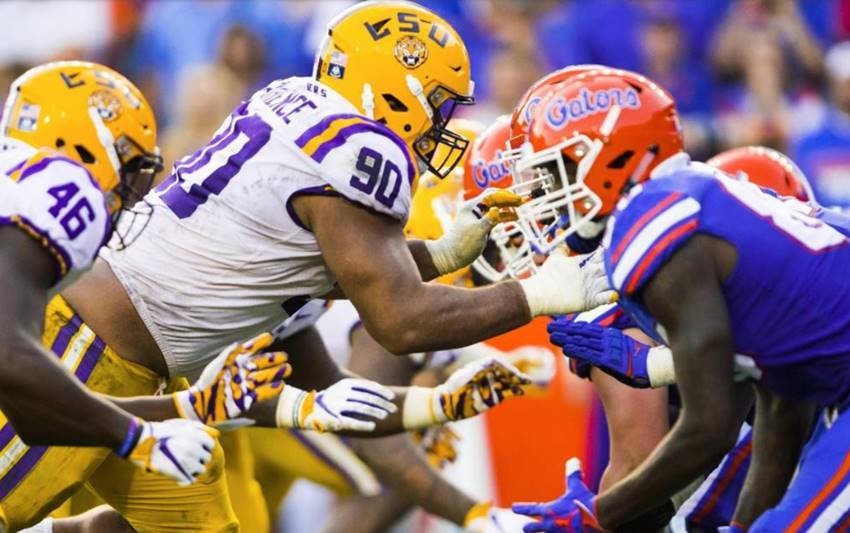 Lawrence (6-2, 308) is tough. He played hurt frequently at LSU. Lawrence is good at the point of attack, holding his ground well against the run. Lawrence is seasoned, having played in 44 games with 34 starts at LSU.

The Neville High School product big effort player, a trait which could earn him time in a rotation with the Cardinals.

Also in the fourth round, guard Kevin Dotson of UL-Lafayette was picked by Pittsburgh.

Dotson was the second Ragin’ Cajun offensive lineman chosen, joining Robert Hunt, who went in the second round to Miami. Dotson (6-4, 310) followed his father Kelly in playing for Louisiana. Two of his uncles, Alvin and Dennis McKinney, played in the NFL. His twin brother, Kelly, plays at Nicholls.

A solid, accomplished run blocker who can work on his pass blocking skills, Dotson played high school football at Plaquemine.

A pair of Louisiana Tech stars went back-to-back at picks 138 and 139 in the fourth round.

Defensive back L’Jarius Sneed was chosen by Super Bowl champion Kansas City while former Thibodaux star Amik Robertson went next to the Raiders.

Sneed (6-0, 192) is not big for a safety but he is very fast, running under 4.4 in the 40-yard dash. He is also an amazing leaper, with a 41 inch vertical. Sneed returned three interceptions for touchdowns at Louisiana Tech.

Bringing experience and versatility to the next level, played cornerback for the Bulldogs prior to this past season. He could play corner or safety in the NFL but analysts see his future likely as a press corner.

Robertson is an electric talent. Some have compared him to Tyrann Mathieu.

Both are small but explosive.

Robertson (5-8, 187) made his mark immediately in Ruston as he made the Freshman All-American team with an outstanding first season. He later became a first-team All-CUSA performer.

Like Mathieu, Robertson plays with attitude. He fears no one. Robertson has good recognition and ball skills. He is a solid, willing tackler, despite his size.

Robertson may have gone a bit higher in the draft but he is coming off of a torn left groin which required surgery.

In the fifth round, Fromm finally got the call, picked by Buffalo with pick 167 overall.

Fromm (6-2, 219) has a great personality, is very smart, and has tremendous leadership skills. What he did not exhibit this past year was a great arm or great accuracy and he does not run that well.

Better at Georgia as a younger player, Fromm would appear to be a solid backup-type who can manage a game, rather than carry a team. Of course, Josh Allen is the starter with the Bills.

Tulane star wide receiver Darnell Mooney got the call in round five from the Chicago Bears at pick 173. 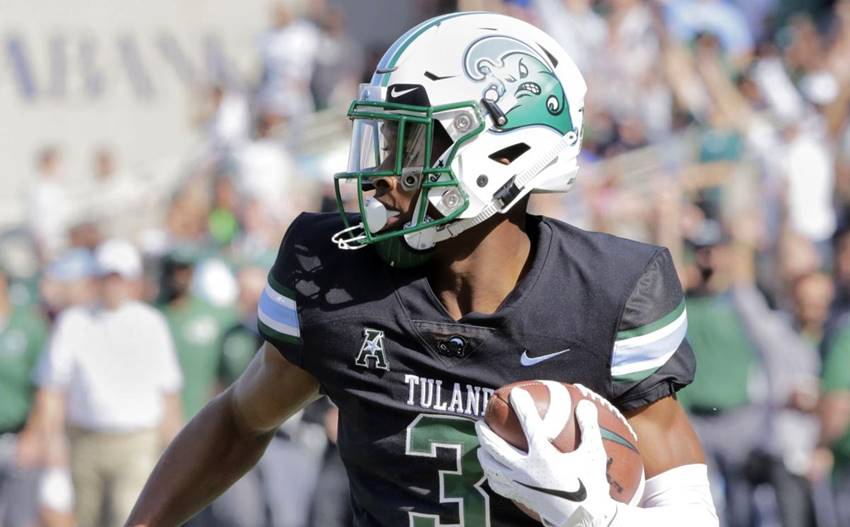 Mooney is blazing fast and that speed (4.38) will give him a real chance in the NFL. He was a consistently good player over four seasons with the Green Wave, a consistent deep threat who had a chance to score every time he touched the ball. He fights bigger players for the ball with good success.

In round six, the 13th LSU player was selected when long snapper Blake Ferguson went to Miami at pick No. 185.

Ferguson has elite ability at a spot which requires elite skill. He was the only exclusive long snapper chosen in the draft. Ferguson followed his brother, Reid, as the long snapper at LSU, keeping it all in the family. Reid earned a job in the NFL with Buffalo and Blake figures to do the same with the Dolphins, in the same division with his brother so they will see each other twice per season.

Another quarterback went off the board in the seventh round in Cole McDonald of Hawaii, picked by the Titans.

A very good athlete, McDonald has accounted for 80 touchdowns in his last two seasons with his passing and running.

While he is a really good athlete who runs well, McDonald has only adequate arm strength, which is why he was not picked earlier. He has a different arm motion and release.

At pick No. 237, the Chiefs drafted Tulane cornerback Thakarius Keyes. Kansas City traded up to get Keyes.

Keyes was a two-year starter for the Green Wave, starting 23 of the 24 games he played in. Keyes had 85 tackles, defended 18 passes and had two interceptions. Despite being big, his tackling skills must improve.

Focused as a teenager more on basketball, Keyes did not start playing football until his junior year of high school in Laurel, Miss.

The Saints then traded back into the draft to acquire the 240th overall pick and selected Tommy Stevens of Mississippi State. New Orleans gave up a sixth round pick in the 2021 draft to Houston to get Stevens.

At 6-5, 240, Stevens is huge. He is an athlete who can and will run and challenge tacklers.

Tampa Bay drafted University of Louisiana running back Raymond Calais at pick 245 in the seventh round.

Calais (5-8, 188) is small but he can move, running in the low 4.4 range. He is a very good athlete. Calais is an outside runner who may be able to play on passing downs. The Cecilia product has good cut-back ability. Calais is a fast, effective gunner in the kick game, which could enhance his chance of making the squad.

LSU then tied the record with a 14th selection as tight end Stephen Sullivan with the 251st pick overall to Seattle. Ohio State had 14 players picked in the 2004 draft.

Sullivan (6-5, 248) is a converted wide receiver. He has a huge catch radius. Despite being big, he is not that physical so he would be more of a receiver, as compared to a blocker. He is an intriguing prospect with his size and ability to high-point the ball. Sullivan got lost in the shuffle at LSU, with the presence of so many gifted wide receivers, and he was slotted behind Thaddeus Moss at tight end.

Among those not drafted were LSU linebacker Michael Divinity of John Ehret, Nicholls quarterback Chase Fourcade of Archbishop Rummel and Tulane wide receiver Jalen McCleskey of St. Paul’s. Also not drafted was LSU tight end Thaddeus Moss, who is coming off of surgery for a fractured foot.