‘Taysom Time’ is an unfinished song with a good first stanza

Time waits for no one, as Ambrosia once sang.

Time keeps flowing like a river, to the sea, as Alan Parsons told us.

All we have is time, and then we don’t.

Each of us is presented with opportunities in our lifetimes, all in due time.

Sometimes, the timing favors us.

Sometimes, our time runs out.

At the ripe age of 30, the clock has just begun ticking on Taysom Hill.

As Earth, Wind and Fire wrote, “As you discover changing times, you must have the strength to endure.”

As the Zombies wrote, it is the time of the season for Hill. His time has arrived. He appears to have the strength necessary to handle the situation.

The first stanza of his signature song has been written and it has the promise of being a hit, but it is a single in the grand scheme. The double, triple and home run are still to follow but let’s stick to football.

Time is on his side. Yes it is. Hill is like a “Rolling Stone” going downhill.

Borrowing a familiar lyric from a great song from the band Chicago, it is only the beginning. It is only just the start of what we all want to feel forever.

Who cares about time when your team has won seven straight games and sits atop the NFC more than halfway through the season?

I’ve got a feeling that tonight’s going to be a good night for Taysom Hill after his performance against Atlanta in a 24-9 win over Sunday. Perhaps Hill likes Black Eye Peas.

No, it was not perfect. No, it does not prove that Hill is the definite successor to Hall of Fame quarterback Drew Brees next year since it appears more and more likely this is the swan song in the brilliant career of Brees.

What Hill proved Sunday is that he is capable of running an NFL offense, a good NFL offense with good leadership from Sean Payton and Pete Carmichael.

There was one shaky decision and another that was not the best but otherwise, you could not find fault with Hill, outside of ball security as he lost a fumble while running for the second time in as many games.

There was the long completion to Emmanuel Sanders which was more like a punt or a fair catch, but it worked. It is the result that matters.

Hill was spot on accurate in Brees-like fashion, completing 18-of-23 passes (78%) for 233 yards with no interceptions. Hill also flashed the vast running skill which we already knew he possesses as he rushed 10 times for 51 yards and two scores. His quarterback rating was 108.9.

Thomas looked like his old self, the vintage 2019 version, with nine catches for 104 yards and that included a pure drop of what would have been a first down and sure points for the Saints. There was one other drop of a Hill pass as well.

Of course, the New Orleans defense was simply brilliant, time after time. It had Taysom’s back, in the words of Cyndi Lauper.

“If you fall, I will catch you, I’ll be waiting. Time after time.”

The hard-charging style of Hill is appreciated and valuable but for Hill to remain viable and valuable as a starting quarterback, he is going to have to temper his violent contact rushes. That is not sustainable long-term.

Still, you want Hill to run it at times, as he did for first downs and as he did in scramble mode for a touchdown against the Falcons.

It is a delicate balance because you don’t want to neuter a potent player and his immense skill.

Hill had a long touchdown pass to Sanders negated by a holding call. He was able to push the ball down the field a bit more than Brees.

Of course, Hill is nowhere near as accomplished as Brees but we got a glimpse of what he could be.

The decision to start Hill over Jameis Winston surprised some, shocked many and drew huge criticism on many fronts.

Hill is an incredibly popular player with fans for his all-out effort on punt block teams, in kick coverage, as a running quarterback who spells Brees and makes an occasional throw and as a receiver out of the slot, split wide or at tight end.

Hill is an incredibly polarizing player with fans as a quarterback. To this point, the reaction has either been love or hate with no in between.

Of course, much of those emotions are born of envisioning what Hill can be in our mind’s eye. The vision is certainly not 20/20.

Some see him clearly as a star while others see him being as far away from that high bar as you can get.

Remember, Hill had attempted just 20 passes in his 4-year NFL career, prior to Sunday.

Is Hill like fellow BYU star Steve Young, as some have suggested, or is he like Tim Tebow, as others have surmised?

For now, the truth lies somewhere in between.

Hill took a huge first step Sunday toward becoming a starting NFL quarterback but it was just the first step in what is a journey rife with obstacles, setbacks and challenges.

Can he handle it?

Hill has a tremendous personality and attitude. He is well liked by teammates and, obviously, by his coaches.

He is a bit of a righteous, not self-righteous kind of guy. As the Righteous Brothers sang, Hill had the time of his life Sunday.

With regard to Winston, perhaps his chance will come. Perhaps it will not.

What the Saints had in Teddy Bridgewater was a quarterback who could do what the Saints needed him to do, to manage the game, complete short passes to move the chains and to avoid mistakes.

With Winston, there is the risk/reward equation of a young man with immense physical talent but questionable decision-making and accuracy issues.

I believe Winston can start again in the league.

Like Bridgewater, that may not be in New Orleans, due to the presence of Hill, who’s time has come today.

As the Isley Brothers continued, “can’t put if off another day.”

It is Taysom time in New Orleans, at least for the present. When Brees is healthy again, it is his job and it should be.

In the meantime, let us all appreciate what Hill accomplished Sunday, pause for a moment and allow the future to unfold to get a larger sample size before jumping to premature conclusions.

If Hill proves to be what Payton feels he can be, then, as Bob Dylan stated, the times, they are a changin’ and it is truly time for Taysom to fly, as the Speedwagon that he is.

The Song is not over, as The Who suggested. The first lyrics were written Sunday. 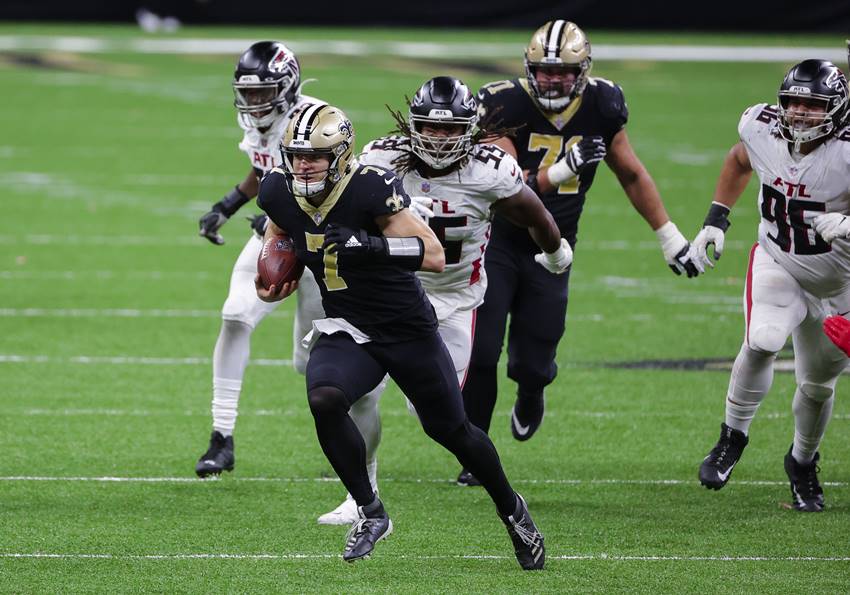 Drew Brees is going to miss at least the next three games for the New Orleans Saints because of rib and lung injuries. Taysom Hill showed he was ready to step into the void.