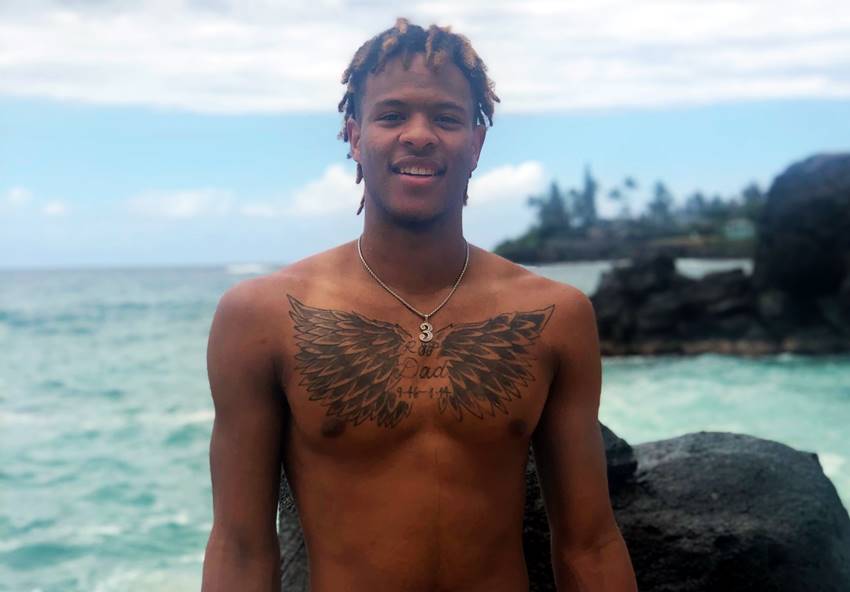 The returning sophomore marketing major spends much of his free time outside of basketball working on, and excelling in, creative hobbies like music and fashion. But the particular arena isn’t as important as who Carson Jr. carries with him as he works toward bettering himself in his respective fields. Regardless of whether he’s playing an instrument or a game, Carson Jr. is carrying his father with him wherever he goes, right on his chest.

When he was 13, Carson Jr.’s father tragically passed away on New Year’s Day. In remembrance one year later to the day, Carson Jr. got a tattoo of wings on his chest, which also included “Rest In Peace Dad” along with his father’s birth and death days. This was significant because, as Carson Jr. said in a recent Zoom interview, “I’m always knowing he’s going to be on my heart there, that’s what everybody sees when I take my shirt off.”

Although he has other tattoos, like those of his mom and his grandma’s names, Carson Jr. did note that his father’s tattoo took the longest and caused the most pain. But to him, that seemed fitting.

“That’s the tattoo that really hurt the most,” he said. “It was like I was going through pain, but at the same time I knew it was for a certain reason. It’s definitely a remembrance because this tattoo took five and a half hours of sitting through the pain on my chest, so I kind of felt it like when he passed away.”

According to Carson Jr., he had always played basketball among other sports, and his dad helped train him in all of them. Even though his father was more of a football guy, the senior Rodney Carson left his son with the message “I know you want to play basketball. Follow through with it; go as far as you can with it.”

And the guard has certainly listened to his father’s advice, appearing in 29 games as a freshman last season. As he is succeeding on the court, he makes sure to remind himself of his father’s influence every chance he gets. In fact, other members of his team and coaching staff have even drawn inspiration from Carson’s Jr.’s connection to his father.

“One of our coaches, JB [Jody Bailey], taps [my tattoo] before every game just so he knows he’s there, [I’m] doing it for him,” Carson Jr. said of the Privateer assistant coach’s pregame prayer and handshake ritual. “Before a game, I’m like ‘This is for you, Dad. I know this is for you when I play.’”

But Carson Jr. honors his father in other ways too, such as his continued music-making, which his father also started him on. Throughout his younger days, Carson Jr. played in various school orchestras and mastered the string bass, violin, viola, saxophone, guitar, piano, drums and clarinet.

“I had a really good ear for music,” he said. “[My dad] bought me a keyboard and everything and I would just go home and start to play songs that I know out of my ear and figure it out without even knowing the natural music. So then once I started doing the music, I was like, ‘Wow I can read any music on any instrument. Why wouldn’t I be able to translate it?’”

Carson Jr. is able not only to translate note from note, but also one set of skills to another vastly different one. “It might sound weird,” he said, “but [music requires] a lot of hand-eye coordination that goes into everything. Understanding music and understanding things you do on the court. Your [court] IQ, I guess you could say, what you do and how fast you do it.”

So even as Carson Jr. spends most of his time practicing his basketball, he always makes time to create music with his teammates and explore other things that make him happy too. Recently, it was a shift over to fashion, which has already resulted in several NBA and NFL players asking for his help with styling. Like his music and his basketball, Carson Jr. plans to stick with this new passion, and allow it to take him wherever it may. Just as his father would have hoped for him.

“Now if he was here,” Carson Jr. said, “he would definitely be proud.” He sure would be proud of you JUNIOR.