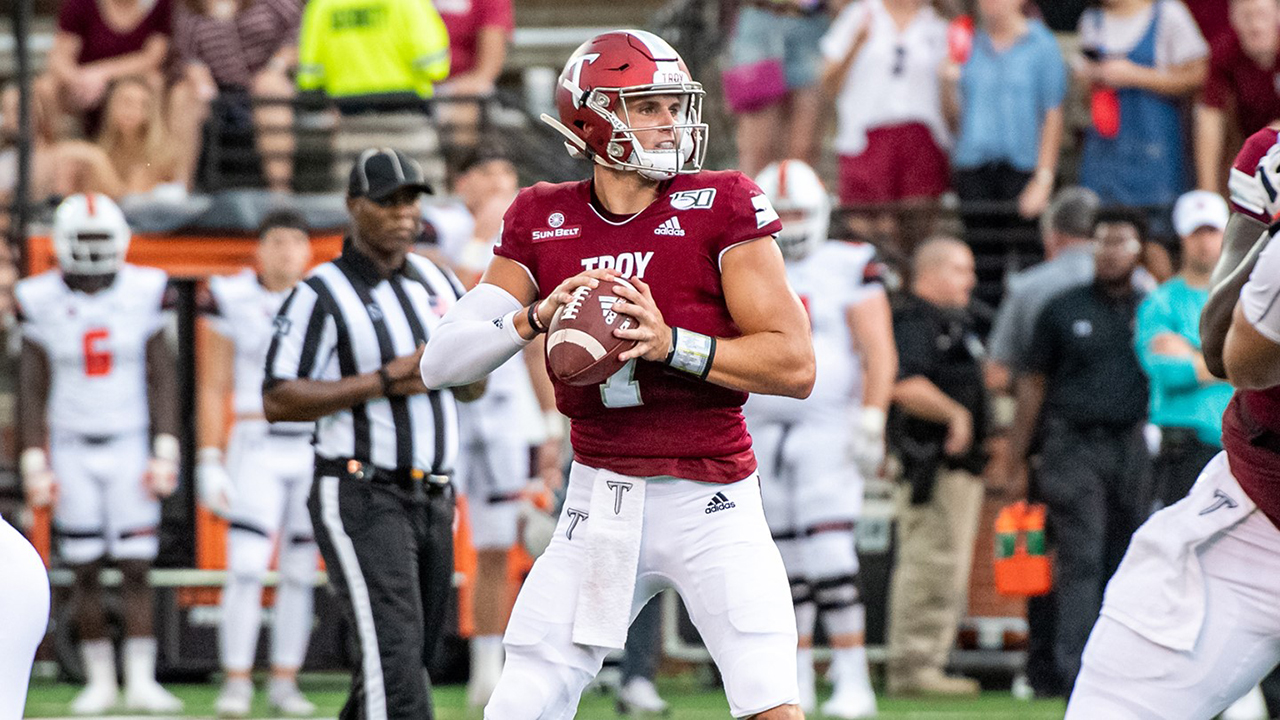 AROUND #SUNBELTFB
• The Week 3 slate for Sun Belt Conference football features eight Saturday games – one on ESPN2, one on ESPNU, one on the Big Ten Network, two on ESPN+ and three on ESPN3.

• Appalachian State remained listed among the teams receiving votes in both the Associated Press and Amway Coaches powered by USA Today Sports Top 25 polls this week. The Mountaineers received two points in the AP Poll and six points in the Amway Coaches Poll. Appalachian State has appeared among the teams receiving votes in both polls every week so far this season. The Mountaineers earned the Sun Belt’s second-ever Top 25 ranking last season – 25th in the Oct. 21, 2018 AP Poll. Appalachian State’s ranking tied the highest-ever ranking for a Sun Belt team with Troy’s ranking of 25th in the Nov. 13, 2016 AP Poll.

• Troy once again received two votes in this week’s Amway Coaches Poll. The Trojans have appeared among the teams receiving votes in every Coaches Poll so far this season.

• Following Georgia State’s upset win at Tennessee, the Panthers were the fourth team in Sun Belt history to receive Reveal Suits National Team of the Week honors by the Football Writers Association of America and head coach Shawn Elliott was named the Dodd Trophy Coach of the Week by the Bobby Dodd Coach of the Year Foundation, in conjunction with the Chick-fil-A Peach Bowl.

• The Sun Belt is building on its non-conference success from a year ago with 11 wins and the third-best winning percentage among the Group of Five conferences through the first two weeks this season.

• The 2019-20 National Football League season opened with 40 former football standouts on rosters across the league’s 32 teams – 23 on active rosters, 10 on practice squads and seven on reserved lists. The conference has representatives on 23 different NFL teams.

• The 2019 Sun Belt Football Championship Game pits the East and West Division champions with the best conference winning percentages on Saturday, Dec. 7. The second edition of the league’s football title game is slated for live coverage on ESPN or ESPN2 at 11 a.m. CT/Noon ET.

OFFENSIVE PLAYER OF THE WEEK
Darrynton Evans, Appalachian State (Jr., RB, Oak Hill, Fla.)
Appalachian State junior running back Darrynton Evans’ career-high 234 rushing yards (on 19 carries), 298 all-purpose yards and four touchdowns (three rushing, one kick return) propelled the Mountaineers to a 56-41 win over Charlotte. Evans’ 234 rushing yards and 298 all-purpose yards were the most by an NCAA Football Bowl Subdivision player so far this year, while his rushing total was the fifth-highest in school history for a game with less than 20 carries. His 87-yard touchdown on the first play from scrimmage was a career-long run, the fourth-longest in the nation this year and the fifth-longest in school history. Evans’ other three scores each came immediately after second-half Charlotte touchdowns to keep Appalachian State at least a touchdown ahead each time. After two games, Evans tops the nation with 166.5 rushing yards per game.

DEFENSIVE PLAYER OF THE WEEK
Chandler Kryst, Coastal Carolina (Sr., DB, Tega Cay, S.C.)
Coastal Carolina redshirt senior defensive back Chandler Kryst matched his career interceptions total over his first four years in just one night with two picks in the road win at Kansas. Kryst, who joined a small company of Chanticleers to record two interceptions in the same game, ended two of the Jayhawks’ offensive series in a tight contest. Kryst and the Coastal Carolina defense held Kansas, which was averaging 241 passing yards per game entering the game, to just 107 passing yards and an average of only 5.6 passing yards per reception. Kryst’s first interception came in the second quarter with the Chants trailing 7-0. Kryst picked off a pass on Coastal’s own four-yard line as Kansas looked to double its lead. His second interception of the game came in Kansas’ first possession of the second half with the Chants down 7-6. He returned it 25 yards to help set up what would prove to be the game-winning touchdown on the next offensive series. Following his second pick, the Jayhawks attempted just four passes over the final 26:25 of the game. The win over the Jayhawks is Coastal’s first-ever win over an Autonomy Five conference school (1-7) and a Big 12 opponent (1-0).

SPECIAL TEAMS PLAYER OF THE WEEK
Tyler Bass, Georgia Southern (Sr., PK, Irmo, S.C.)
Georgia Southern senior placekicker Tyler Bass made a career-high four field goals, including another of 40+ yards in the Eagles’ win over Maine. His field goals of 37, 20, 31 and 40 yards proved to be the difference in the game. Bass also had six touchbacks in seven kickoffs with the one non-touchback coming on an onsides kick.

All Times Central and Subject to Change