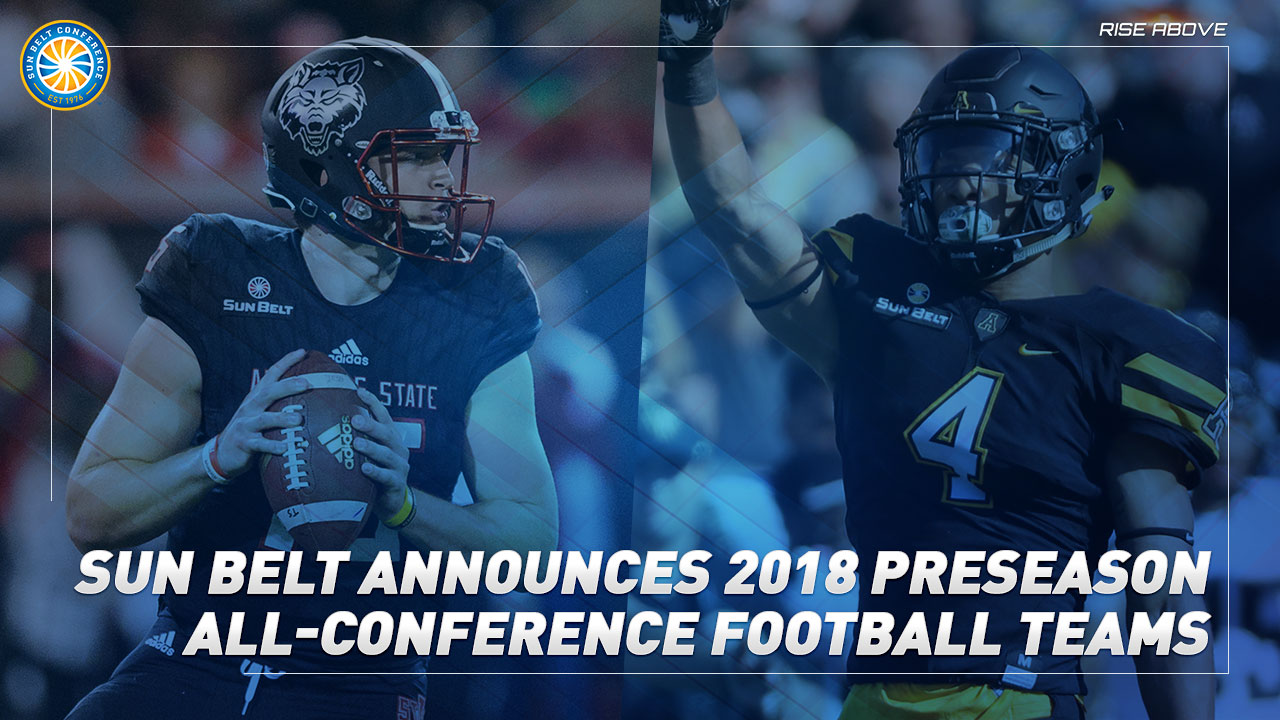 The release comes in advance of the Conference’s Media Day which begins Sunday in New Orleans.

Hansen was the 2017 Sun Belt Conference Offensive Player of the Year and a First-Team All-Sun Belt Conference honoree. The redshirt-senior from Edmond, Okla., started every game for the Red Wolves and led the Sun Belt with 37 touchdowns through the air, breaking the previous Sun Belt record of 32. He finished the 2017 season with 3,967 yards passing on 305 attempts, averaging 330.6 yards per game.

Additionally, Hansen tallied 663 yards rushing and seven scores. Hansen had a hand in 44 of Arkansas State’s 59 touchdowns scored last season. His passing touchdown totals shattered the previous A-State record, giving him 56 for his career at A-State. The redshirt-senior needs just 11 more to tie for the all-time lead in A-State history.

Duck, a junior defensive back from Matthews, N.C., led the Sun Belt with six interceptions last season. He has tallied 11 in his two seasons in Boone. That total ties for the most in the nation over the past two seasons, along with fellow Preseason All-Sun Belt First Team selection, Blace Brown of Troy.

Duck totaled 50 tackles a year ago to go along with his league-leading interceptions and posted six total pass breakups. When targeted, the junior corner allowed a league-low 35.5 passer rating, ranking ninth of any returning FBS corner. During his first two seasons in Boone, Duck has been chosen as an All-Sun Belt First Team performer, earning Sun Belt Freshman of the Year honors in 2016.

Troy led all teams with 11 total selections on the Preseason All-Sun Belt First and Second Teams, six of which were placed on the First Team and five on the Second Team. Arkansas State had nine student-athletes between the two teams while Appalachian State placed seven.

The honorees include 27 seniors between the two teams comprised of 52 total student-athletes. There are 17 seniors and nine juniors on the first team while the second team is comprised of 10 seniors, 10 juniors and six sophomores.

The 2018 season kicks off on Thursday, August 30, with two games as Georgia State hosts Kennesaw State (6:00 p.m. CT on ESPN+) and ULM welcomes Southeastern Louisiana (7:00 p.m. CT on ESPN+). The 2018 Sun Belt Football Championship Game is scheduled for Saturday, December 1. Time, television and location will be determined at a later date.

Entering the second decade of the new millennium, the Sun Belt Conference continues to challenge itself, and its competitors, in all aspects of intercollegiate athletics. Not content with being simply the youngest football conference in the Football Bowl Subdivision, the conference has shown that it can rise each and every season that comes along. And since the birth of the league as a FBS member in 2001, the evidence is clear that the conference is indeed rising above competitors and peer conferences.

The Sun Belt finished second in bowl winning percentage among all 10 FBS conferences the last two seasons and reaching back to the 2014 season, no conference has a better total bowl winning percentage (.611) than the Sun Belt. All that success comes as the 2018 season will see the conference split into divisions (East/West) for the first time and stage its first-ever championship game at the end of the regular season on December 1, 2018.