NEW ORLEANS – Coming off a difficult loss late Saturday in which it held a lead into the bottom of the eighth inning, virtually everyone expected No. 5 Crowder College to finish off Delgado in the South Central District Tournament.

Even worse, the Dolphins had extensive tarp duty as heavy rains and lightning in the area forced the game Saturday to be delayed three hours.

Then, the Fish swam upstream and finished the race in even better fashion.

The Dolphins overcame an early deficit and broke a tie late to down the Roughriders 9-7 to force a deciding game Sunday as Mikey Stutes produced the game-winning run with an RBI single in the top of the ninth inning and later scored an insurance run.

The hero of the game is a hero to his teammates, to his family and to his country.

Stutes has spent some weekends this season serving his country in the Army reserves, causing him to miss baseball games to fulfill his obligation. He received a special dispensation to play this weekend.

“I think it’s Armed Forces Day today,” Delgado coach Joe Scheuermann said. “How about that for a commercial for the U.S. Army? The kid has been unreal, not even knowing if he was going to be here this week and coming up with the game winning hit to get us in the championship game.”

Stutes also chose an education at Delgado and to play baseball for the Dolphins after an outstanding high school career at Northshore and no one is happier than Scheuermann that Stutes made that decision. 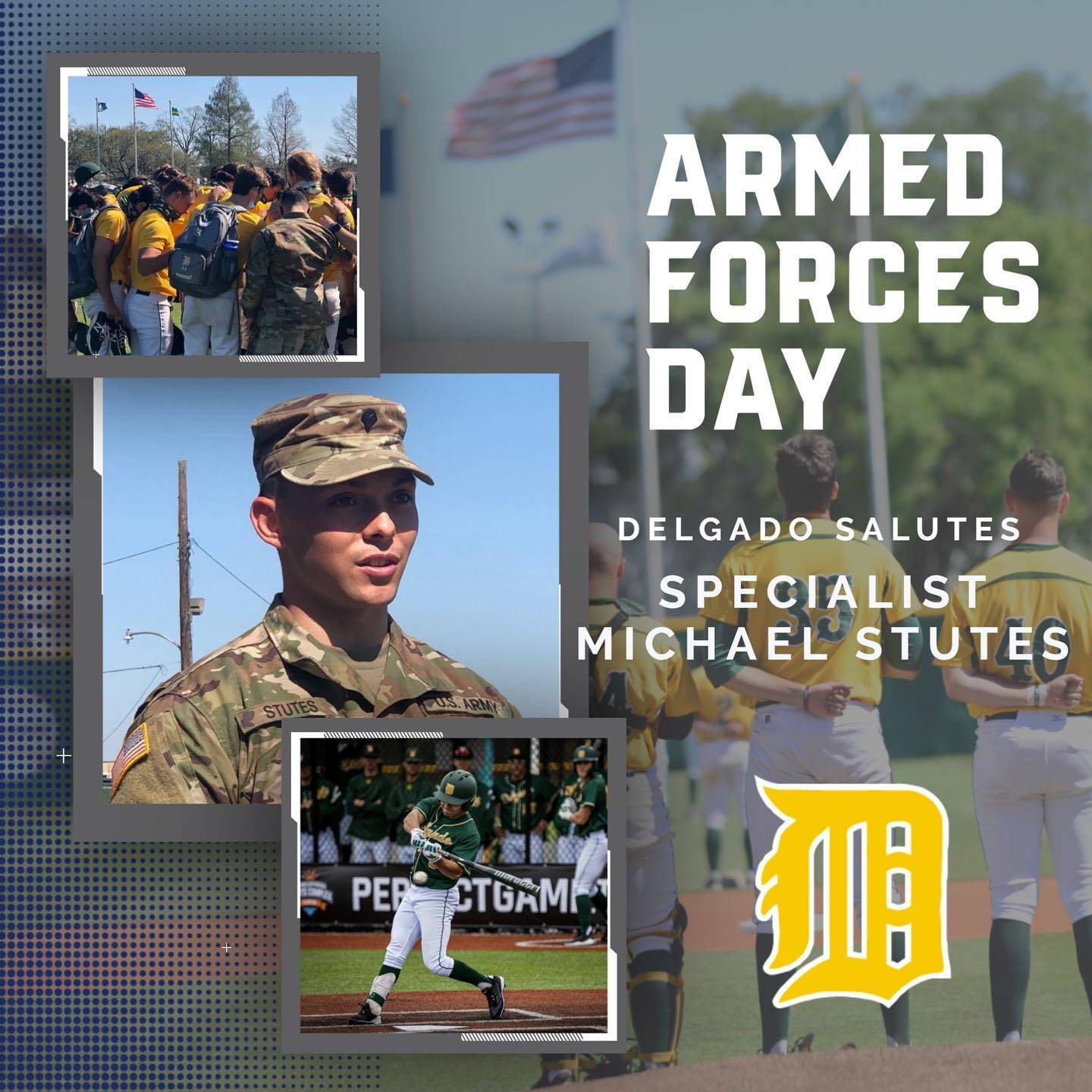 In a back-and-forth contest, Delgado broke on top in the top of the second inning with a two out rally.

Crowder starter Maddox Thornton hit Hayden Kibbe and Cade Pregeant with pitches before Jake Fury drilled a two-run double to deep center to give the Dolphins a 2-0 lead.

The Roughriders erased the deficit quickly and decisively, scoring four unearned runs in the bottom of the second, all with two outs, to take a 4-2 lead, sending nine batters to the plate.

All of the runs were unearned as a result of an error, which allowed the first run to score. Clayton Gray gave Crowder the lead with a two-run double to make it 3-2 before Houston King singled home a run and it was 4-2.

Delgado pulled with 4-3 with a run in the third on a walk to J.T. Singletary, who advanced on a balk and scored on an RBI single by Stutes.

Crowder got the run back in the bottom of the fourth on singles by Chaz Poppy and Gray, finishing Delgado starter Joshua MacCord. Poppy scored on an error and it appeared that Gray scored on a sacrifice fly but he was ruled out on appeal for leaving third base too soon which ended the inning at 5-3.

In the top of the fifth, Delgado took the lead on dramatic fashion.

After a fielder’s choice grounder allowed Ethan Lege to reach, Singletary singled and Stutes walked to load the bases.

Josh Alexander came up with the huge hit, belting a grand slam to right field to give the Dolphins a 7-5 lead.

The Roughriders chipped away with a run in the bottom of the fifth against reliever Dwain Guice on a two-out single by Jackson Cobb and an RBI double by Landry Wilkerson to cut the deficit to 7-6.

Crowder got even in the bottom of the eighth inning on a single by Poppy, a wild pitch, a groundout by Gray, advancing Poppy to third and an RBI groundout by King and it was 7-7.

That set the stage for the winning rally in the top of the ninth inning.

Lege started it with a double and with one out, Stutes singled up the middle to score Lege to give Delgado an 8-7 lead. Stutes would later score on a wild pitch to make it 9-7.

“It means a lot,” Stutes said. “We’ve got a good club and they’ve (Crowder) got a great club. I’m trying to enjoy baseball to the fullest. We’ve got one more game tomorrow and hopefully we’ll make it to the World Series. Lege got the double. I had an opportunity and I took it, trying to put a good barrel on the ball. We’ve really gelled. This team has heart.”

Guice was a hero as well, not only saving the bullpen and pitching for a deciding game but pitching in outstanding fashion, going six innings, allowing just two runs on four hits to pick up the win.

Guice was not going to give up the ball once he got it.

“Absolutely,” Guice said. “I think I can always go the distance every time I come in. I love to give that effort every time. This is the toughest team I think I’ve every played on. We’re never out of a ball game. Nobody ever thinks we’re out of a ball game, no matter what the score is. We’re coming to play. I was not coming out.”

“We’re going to play you from start to finish,” Delgado coach Joe Sheuermann said. “That’s what we’ve done all series here. Get down on the deck, get up, brush yourself off, a couple of bad mandatory eight counts but some kind of way, found a way to get the knockout. How about Guice? You’ve got to love him. He’s been my greatest competitor since I lost Chris Westcott here. Westcott was on my first team. This kid is just as much of a competitor as Chris was. There was no way I was going to get him.”

Josh Barnhouse took the loss in relief for the Roughriders (52-11), ranked fifth in the nation.

With the win, Delgado (37-15) forces a deciding game for the title, scheduled for Sunday at 1 p.m., weather permitting, with the winner to advance to the NJCAA College World Series in Grand Junction, Colorado.

“It’s going to take the same effort that we put forth tonight,” Scheuermann said. “We’re going to have to piece-meal our pitching but we have to swing the bat.”