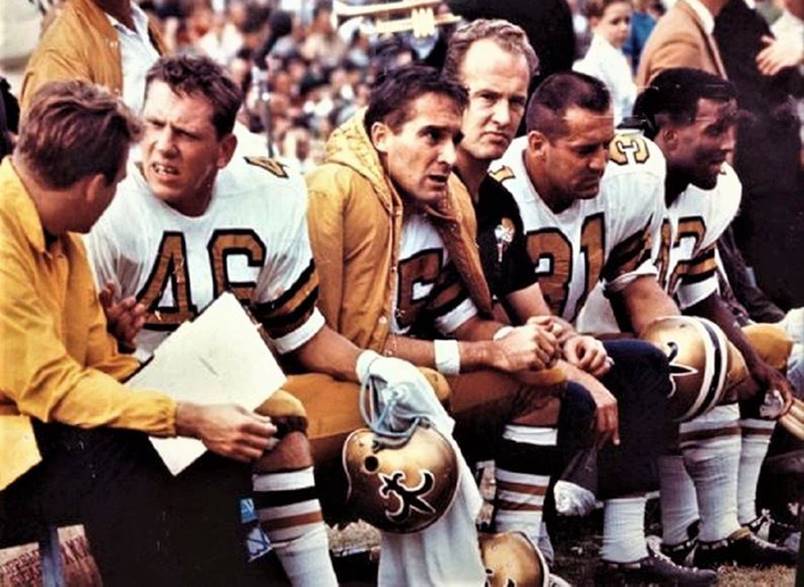 As a kid, I never saw my father happier.

In the fall of 1966, newspapers came in the morning and in the afternoon. Ed Daniels came home with an afternoon paper trumpeting New Orleans as the newest NFL city.

Back then, a season ticket was 15 dollars. Yep, a youth ticket in the end zone, purchased with an adult ticket, was 15 bucks.

A lot of kids got to see a lot of Saints football. Like me, they were hooked for a lifetime.

For the initial wave of Saints fans, the 1967 team will always have a special place.

Gary Cuozzo, who came in a trade from Baltimore, was supposed to be the quarterback. It was the first of many disastrous deals for New Orleans.

With the first pick in that draft acquired from New Orleans, the Colts selected Michigan State defensive lineman Bubba Smith.

Instead of Cuozzo, the starting job was won by Billy Kilmer, a quarterback with a pot belly and a limited arm. However, Kilmer was tough and grossly underrated as a leader, plus more athletic than he was seen by most.

Kilmer was one of more 40 players selected by the Saints in the expansion draft. The most famous was former Green Bay Packers running back Paul Hornung.

Among those expansion selections were less heralded players who not only performed well, but stayed in our city long after their playing careers ended. The solid finds included linebacker Steve Stonebreaker, center Joe Wendryhoski and defensive back Dave Whitsell.

Whitsell was the best player in the inaugural season for New Orleans with 10 interceptions in 1967.

As a kid, I studied the Saints preseason roster, forwards and backwards. It seems almost surreal that the Saints first preseason game was not televised.

The regular season opener against the Rams at Tulane Stadium is famous for John Gilliam’s 94 yard return for a touchdown on the opening kickoff.

At the Saints Hall of Fame golf tournament in this past spring, I told Gilliam I was there for the big moment.

I had to laugh but I was really there, a 10-year old kid with my dad in section P of the south end zone.

No matter what has happened in 53 years of Saints football, including the Super Bowl win 10 years ago, Gilliam’s return is still my favorite moment.

The 1967 Saints also brought 17th round pick Danny Abramowicz to New Orleans. He simply refused to be cut. Danny was the 420th player selected in that year’s draft.

No matter where Abramowicz goes, or what he does, he will always be a beloved Saint.

There were many others who made their imprint on that first Saints team, like guards Eli Strand and Del Williams, linebackers Bill Cody and Fred Whittingham, and defensive backs Obert Logan and Bo Burris.

To the current generation of Saints fans, these names may mean little. Back in the fall of 1967, they were part of something special.

Those Saints made New Orleans a big league city. Fifty-three years after the birth of the New Orleans Saints, the original team should take a collective bow.