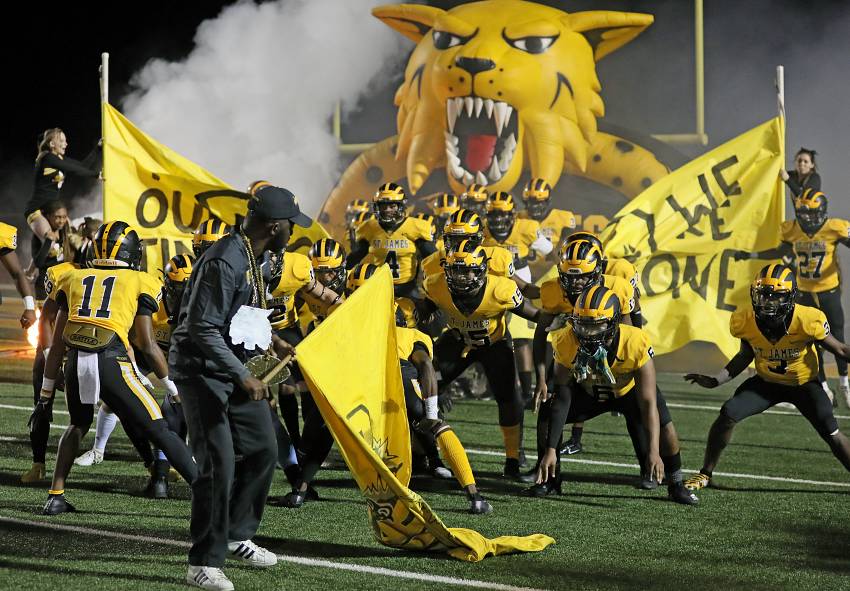 It was a bit of a tough offseason for St. James.

After six seasons, outstanding coach Robert Valdez left to become an assistant at Grambling, having posted an impressive 55-19 record. That included winning the Class 3A state championship in 2019, the first state title for the Wildcats since 1979.

LaVanta Davis is the new head coach and athletic director for 2022. He served as co-defensive coordinator and defensive backs coach for three seasons under Robert Valdez.

A New Orleans native who played at Landry, Davis is a proven, winning head coach.

Previously, Davis was outstanding in that role at Scotlandville, posting a very impressive 21-3 mark, leading the Hornets to the Division I state championship game in 2016.

Suffice it to say that the Wildcats are in good hands with Davis and that he has a great chance to grab the job on a permanent basis.

St. James went 7-4 last season, reaching the second of the playoffs, falling to Madison Prep. The Wildcats reached the quarterfinals in 2020.

Senior Kaden Williams (5-8, 160) is back at running back while junior Kobe Brown (5-8, 155) should be a standout at wide receiver. The fullback is Marquell Walker and the other wideouts include Chase Jasmin and Cyler Christmas.

Up front, seniors Jace Philip (6-1, 265) and DeShawn Jenkins (6-1, 270) will anchor things at the tackle spots. The guards are Jamaul Hooker and Chandler Roberts and the center is Luke Gravois.

The defensive front includes Philip and Jenkins at the tackle spots, along with Nick Chopin and Bryce Batiste at the end positions.

At linebacker, senior Braye Therence (5-10, 185) is an excellent player and he is joined by DeAndre Videau.

In the secondary, senior Jaden Aubert (5-10, 170) is outstanding at strong safety and should attract college interest. He is joined by Jarrell Williams at free safety. The corners are Gary White and Christmas.

The schedule opens with a tough challenge at Class 5A East St. John on September 2 before the Wildcats host West St. John. Home games with Thibodaux and Assumption follow before tough road games at Woodlawn of Baton Rouge and Lake Charles College Prep.

District 8-3A begins at home against Patterson on October 14 before the Wildcats travel to Donaldsonville. After hosting Berwick, the regular season concludes at always tough E.D. White Catholic.

With five state championships in its rich history, St. James is accustomed to winning in large fashion. There is no reason to believe that winning in that fashion will not continue under Davis.