The Greater New Orleans Sports Awards Committee, sponsored by the Allstate Sugar Bowl, selects annual award winners in a variety of categories; it also selects Amateur Athletes of the Month and each year’s Hall of Fame class. Overall, 23 individuals and two teams will be honored for their 2020-21 achievements at the Greater New Orleans Sports Hall of Fame Awards Banquet on July 24. Honorees are being announced over a period of 23 days, wrapping up with the Corbett Awards for the top male and female amateur athletes in the state on July 20 and 21.

Lewis, in his first year at the helm of the St. Aug program, led the Purple Knights to the LHSAA Division I championship, its first state championship since winning the Class 5A Championship in 2011. In the semifinals, the third-seeded Purple Knights overcame a 17-point second-quarter deficit to defeat No. 2 St. Paul’s, 75-72, in overtime.

“As a coach, you just want to see your guys come together,” Lewis said. “That’s everything I’m teaching them. Be a brotherhood. Lean on each other. Trust each other. Be that for each other. And when you’re down 17, you can’t come back if you don’t do that.”

The victory gave St. Aug a third chance in as many seasons to take down No. 1 Scotlandville in the Division I championship. Scotlandville came into the title game with four straight state titles on their résumé and the Hornets had taken down the Purple Knights by 20 and 27 points in the last two title games. This time, St. Augustine (29-7) rallied for a lead in the third quarter and stayed ahead to the end, winning 47-44 at Burton Coliseum in Lake Charles.

“I didn’t know that was going to swing the score,” said Lewis, whose team went from down seven to up four at the end of a 13-2 run in the third quarter. “I felt like we had more legs and more energy than the five guys they want to play. That was our game plan.” 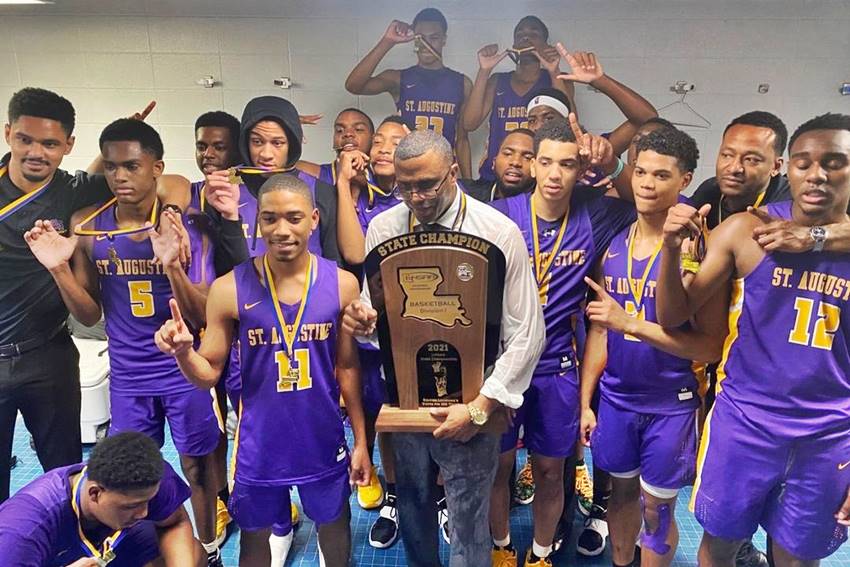 The other finalists for Greater New Orleans Boys’ Prep Coach of the Year were Kenneth Goodlett (Jesuit Baseball), Bruce Himbert (Brother Martin Bowling) and Steven Kelly (McMain Basketball). Goodlett directed the Blue Jays to their first state title since 2011 as they closed the season with a 25-game winning streak to take the LHSAA Division I state championship. After losing its first regular-season match since 2013, Himbert refocused the Brother Martin bowling team and it re-established itself as the team to beat in Louisiana as it won the LHSAA Championship for an unprecedented fifth time, despite entering the postseason as the fifth seed. Kelly, the LSWA Class 4A Coach of the Year, led the Mustangs to victory over top-seeded district rival Carver in the LHSAA Class 4A Championship game for the school’s first basketball title – McMain posted a 1-23 record four years ago before hiring Kelly as its coach.

The Allstate Sugar Bowl will continue announcing its annual awards tomorrow (Wednesday) as the Greater New Orleans Girls’ Prep Coach of the Year will be released at 10 a.m. (finalists will be announced at 11:30 a.m. today on Twitter (@SugarBowlNola).