This week officially launches the much anticipated 2019 campaign for the LSU Tigers as spring drills get under way. The entire program is on a solid foundation, looking to build on what they accomplished last season.

What a difference a year makes for the Purple and Gold following last spring when there were three players jockeying for the starting quarterback job. Joe Burrow wasn’t even on campus. Plus, there were additional question marks on both sides of the line.

The ’18 season culminated with a 40-32 victory over previously undefeated UCF. Compared to the 2018 spring, these Tigers will be off a running start offensively thanks to a bit more certainty at key positions.

Burrow, firmly entrenched behind center, has a much better understanding of expectations and responsibilities at LSU heading into his senior season.

What impact will new offensive coaching arrival Joe Brady make? More consistency in the passing game is his top priority.

Burrow completed 57.8 percent of his offerings for 2,894 yards, 16 touchdowns and five interceptions last season. The 6-foot-3, 220 pound Ohioan was also the second leading rusher for the Tigers with 399 yards. He won’t scare defenses with his foot speed, but Burrow is just capable enough to present another dimension to keep the opposition honest.

LSU’s offense accounted for 228.5 yards per game through the air and 173.6 yards on the ground. But Burrow was sacked 35 times. Pass protection must improve. So should Burrow’s overall numbers as a passer with more experience back at receiver.

Myles Brennan redshirted last season and Burrow’s backup should be stronger, wiser and much improved over last year’s version. Do not undersell 2019 signee Peter Parrish either. He arrives with unique skills as a dual threat. It will depend on how quickly he grasps the offense whether Parrish shoehorns his way into playing time. More options for offensive coordinator Steve Ensminger and the aforementioned Brady can only be a good thing.

The stable of running backs, once a major concern in Baton Rouge, now offers great promise.

Clyde Edwards-Helaire (5-8, 212) returns for his junior season after notching 658 yards and averaging 4.5 yards per carry with seven scores last season. He doubled as a solid kick returner, posting 24.5 yards per effort. Lanard Fournette hopes to have a big finish as a senior having emerged as an option late in 2018.

There should be a three or four man rotation at running back but it is possible that one of the newcomers could emerge to demand the most touches.

Junior fullback Tory Carter (6-1, 259) is a dependable blocker who also possesses good hands as a receiver. The current offense does not use the fullback as much as we saw in the Les Miles years but Carter will see important action.

There is a log-jam of talent at receiver, led by junior Justin Jefferson who could emerge as one of the elite receivers in the SEC this season. I am expecting big things out of Ja’Marr Chase and Terrace Marshall as sophomores as well.

Chase (6-1, 205) has great upside as a receiver and blocker. He possesses similar skills to former LSU star Jarvis Landry.

Marshall (6-3, 195) was Louisiana’s top overall prospect in the 2018 class. He showed his great talent at times, but injuries during his senior campaign at Parkway High slowed his initial progress in Baton Rouge.

Another senior, Derrick Dillon (5-11, 184), has big play potential out of the slot as evidenced by his huge touchdown catch -and-run at Auburn last season.

Watch out for 2019 signee Trey Palmer from Kentwood. With his 4.4 speed and shifty moves in space, he offers an element lacking in the overall group. Another new signee, Devonta Lee, arrives armed with skill and desire to see the field early.

After a tough season in 2018. Jonathan Giles will get his final opportunity to reach expectations.

The wideout spot is a position with an over abundance of candidates, perhaps too many to squeeze in on the final roster.

Now that tight end Foster Moreau is off to the NFL, the Tigers must fill a major void not only in productivity, but more importantly, as a leader and locker room presence.

JUCO signee T.K. McClendon (6-5, 247) will be given ample opportunity to play a big role while junior Jamal Pettigrew (6-7-262) hopes to put injuries behind him to be a factor. Senior Thaddeus Moss (6-3-247) and redshirt freshman Zach Sheffer are also in the mix. Collectively, the tight end position is on solid footing.

Offensive line was a major question mark entering 2018. A year later, the unit’s experience and depth is much improved.

Left tackle Saahdiq Charles (6-5, 316) seemed to regress from a strong freshman debut in 2017 but has the skills to solidify that spot. Austin Deculus (6-7, 321) evolved into a good option at right tackle, as the junior progressed toward the end of last season.

Former starting right guard Ed Ingram’s future is still up in the air, but word is that he maybe back for the summer.

Keep an eye on sophomore Chasen Hines (6-4, 335), who made eight appearances and a handful of starts at guard last season. One former LSU starting O-linemen told me that Hines has “an All SEC look.”

Enter signee Kardell Thomas (6-3, 356), who is certainly physical enough to compete with the SEC’s big boys but faces a slight learning curve at this level.

Adrian Magee (6-4, 335) enters his senior season after having represented himself well in a number of roles along the line.

Badara Traore (6-7, 315) arrived with high expectations last season as a JUCO signee. He gets his final chance to justify his high recruiting rankings.

Two a 2018 signees may surprise as key contributors on the line. Dare Rosenthal (6-7-327) moved from defensive line to offense. Spring and summer for him loom large. He can be special as a tackle with some work. Cameron Wire is another to monitor closely. He utilized his freshman season to develop, observe, gain strength and mature physically.

The Tigers ran 73 plays per game, averaging 29.7 passes and posting 32.4 points each contest (with 29 rushing touchdowns) while allowing 21.8 points to opponents. LSU was penalized only an average of six per game, but the timing of those yellow flags hurt at times on offense.

Scoring at an 88 percent rate in the redzone on 60 trips with 31 culminating in a touchdown, the Tigers still have a great deal of room for improvement in that area. Automatic kicker Cole Tracy’s departure represents a major void.

Junior punter Zach Von Rosenberg booted for an average of 45.7 yards last year while sophomore Avery Atkins shined as a kickoff specialist all of season. Junior kicker Connor Culp will get strong consideration to replace Tracy but don’t sell 2019 signee Cade York short. Fans took notice when York converted on a record 59 yard field goal at the Under Armour Game. He also has a 5.18 seconds hangtime on his punts if needed. 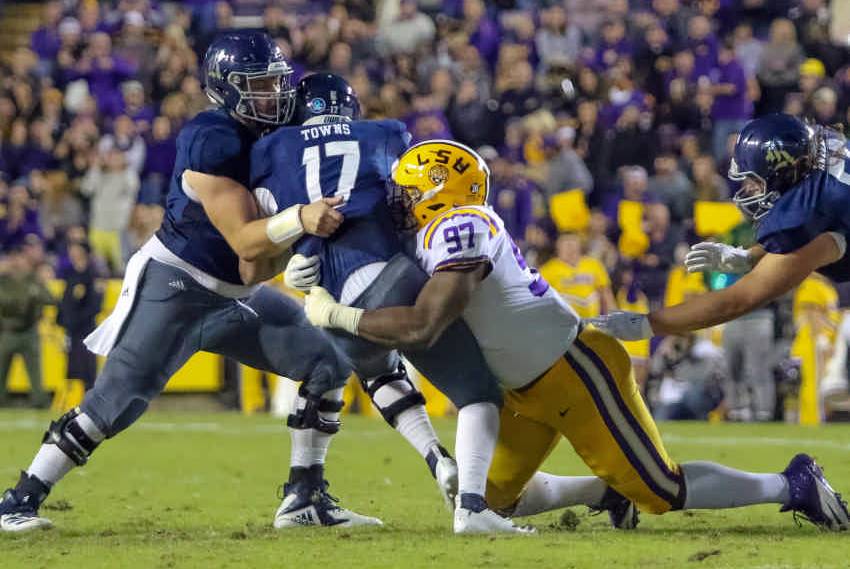 The Dave Aranda defense was the backbone of the 2018 LSU Tigers. Everyone expects that unit to shine once again this upcoming season.