The Dave Aranda-coached defense was the backbone of the 2018 LSU Tigers. Even as we enter spring practice time, everyone expects that unit to shine once again this upcoming season.

The return of edge rusher K’Lavon Chaisson, who was injured in the 2018 season opener against Miami, is a game changer. Off the edge, he is a difference maker. Much like departed middle linebacker Devin White changed the flow of the game, Chaisson is someone for whom the opponent must game plan.

Along the defensive front, Glen Logan tallied 46 stops, 4.5 tackles for loss (TFL) and four sacks last season. Breiden Fehoko only played in eight contests due to injury while Rashard Lawrence had 54 tackles, 10.5 TFL and four sacks. The trio forms the best returning defensive line in the SEC.

A melted down version of Tyler Shelvin, listed at 6-foot-3 and 362 pounds, played in six games. The nose tackle can be a major factor by keeping his weight in check. Apu Ika, a 2019 signee, will get reps at the position as well but it will depend how he progresses. Redshirt freshman Nelson Jenkins III could seize an opportunity here.

A pair of juniors, Neil Farrell and Justin Thomas, just scratched the surface last season. Both have good upside to become at least key figures in the defensive line rotation.

A 2019 signee, Soni Fonua, was a late addition who can develop as a force off the edge.

The major losses on defense were elite linebacker Devin White, safety John Battle and top cover cornerback Greedy Williams. But the Tigers have the depth to re-load.

Jacob Phillips (6-4, 230, Jr.) has prototype size and skillset to be the next great LSU insidebacker. Very physical at the point of attack, he totaled 87 tackles, 5.5 TFL and one interception in 2018. Phillips will step into a bigger role with White’s departure.

Patrick Queen made great strides as 2018 progressed. He had 40 stops, 5 TFL and one sack. The junior slides into the inside linebacker spot opposite Jacobs.

Among the other options inside, Micah Baskerville had 11 tackles in a start as a freshman against Florida. A 2019 signee who is potentially good enough to play early, Donte Starks, had 129 tackles, 17 TFL and 7.5 sacks as a senior at John Ehret. Another ’19 signee, Kendall McCallum, is a physical, downhill tackler who brings the wood at 247 pounds but missed several games in high school with a heart ailment.

Travez Moore (6-4, 253), a Bastrop product who arrived in the ’18 class with a reputation as a top quality pass rusher, will vie for more playing time in the fall.

Michael Divinity, a senior, decided to pass on the NFL draft for one more season in Tigertown. He chipped in with 54 tackles, 9.5 TFL, four sacks and an interception last season. The Ehret alum is counted on as a ringleader for Dave Aranda’ squad.

Ray Thornton had 21 stops, 2.5 TFL and a sack as a sophomore while Andre Anthony (6-5, 242) hopes to live up to the lofty expectations from when he arrived in the ’16 signing class. Dantrieze Scott, Damone Clark and Jarrell Cherry will all get long looks in spring to enter into the outside linebacking plans.

Transfer addition Michael Williams, once a 6-2, 245 pound quarterback at Dunham before he grew into a 275 pounder, played defensive tackle for the Texas Longhorns last season. As a recruit, he rejected offers from LSU, Ole Miss, Alabama, Texas A&M and Tennessee. He did not see a snap in a Burnt Orange jersey last fall but will have to sit out ’19 with three seasons of eligibility remaining after that. Texas head coach Tom Herman described him as a “sleeper.”

The secondary is a position of strength after transitioning somewhat in 2018. Strong safety Grant Delpit (74 tackles, 9.5 TFL, 5 sacks, 5 interceptions, 9 PBU in 2018) is in the mold of Jamal Adams and Eric Reid, a pair of NFL first rounders. Delpit should be among the Jim Thorpe Award finalists at season’s end.

Todd Harris had 31 tackles and an interception last season as a sophomore while the versatile Jacoby Stevens (6-3, 225) pitched in 35 tackles, 6.5 TFL, a sack and an interception. Stevens seems to have found his niche as a hybrid safety/outside linebacker.

Kelvin Joseph, a 4 star 2018 signee, spent a majority of his reps at cornerback in 11 games played, but he will likely move back to safety opposite Delpit. Eric Monroe and Cameron Lewis offer veteran depth at safety.

Derek Stingley, a 5 star early signee, is being hailed as the second coming of Patrick Peterson or Mo Claiborne. He’s expected to form a starting cornerback tandem with junior Kristian Fulton as a true freshman.

Another junior, Kary Vincent, has starter’s talent. He managed 31 tackles, six PBU and an interception last year. He brings speed to the corner spot as one of the fastest players on the team and runs track for the Tigers.

Among others on the island, Jontre’ Kirkland gained some experience last yeat while Manny Netherly seems more comfortable following his conversion from receiver. Netherly has ideal size (6-3, 194) with 4.45 speed.

Three 2019 signees – Raydarious Jones, Cordale Flott and Maurice Hampton – will be afforded opportunities to prove they are ready to play at corner if called upon. They will experience a learning curve, and Hampton could end up leaving the program this summer after his expected selection in the MLB draft.

Marcel Brooks is a new signee who is talented enough where coaches will have to find a spot for him, perhaps in a hybrid role like Stevens. Brooks has the ability to be a difference maker as a true freshman.

It appears that more favorable schedule presents itself for LSU in 2019. The matchup in Austin against the Sugar Bowl champion Texas Longhorns looms large on Sept. 7 in the first road game for the Tigers. The UT game will be a great gauge for both squads.

However, the Tigers must first take advantage of the time on the field in the spring, capped by the National L Club Spring Game presented by Tony Chachere’s in Tiger Stadium on at 1 p.m. on Saturday, April 6. 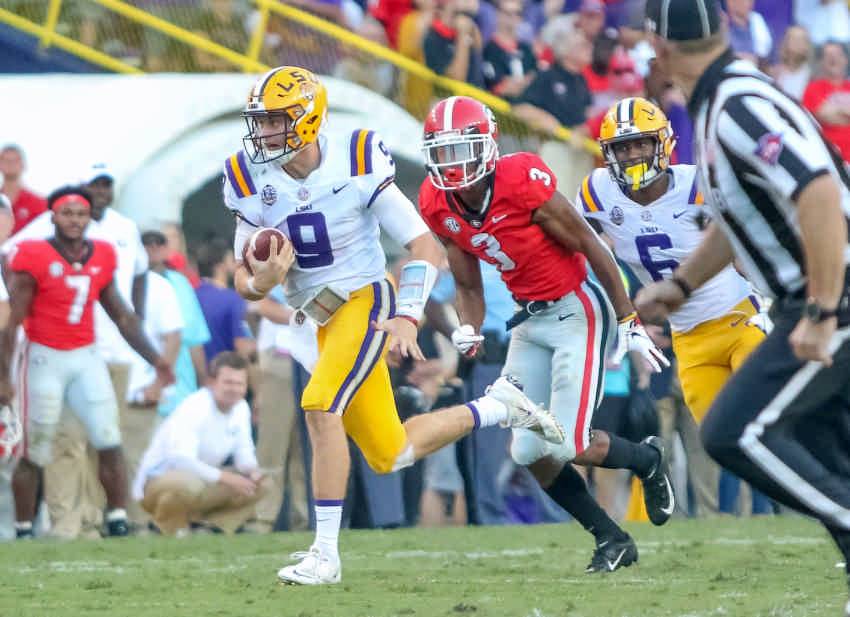 Compared to the 2018 spring, these Tigers will be off a running start offensively thanks to a bit more certainty at key positions.