BILOXI, Miss. – Sunday night inside the newly opened sports betting area at the Beau Rivage Casino was a chance for employees to catch their collective breaths.

With only one game of significance being played – the Sunday night Major League Baseball game – it was the first lull since the Beau opened its sports betting operation Aug. 1, one employee said.

Now, with football season on the horizon, the lulls figure to be few and far between, and the competition for the sports wagering dollar is going to increase. 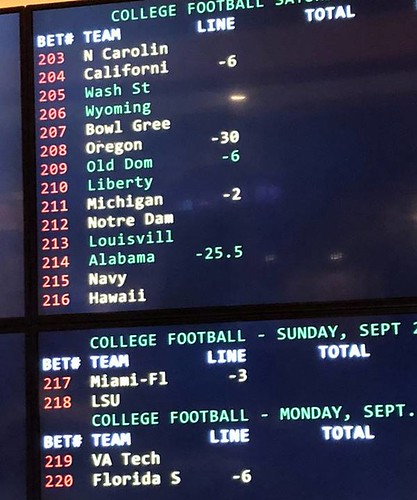 By the time the college football season opens in full swing on Sept. 1, all eight casinos in Biloxi should have, at minimum, a temporary sports betting operation in place, according to Cliff Kirkland, chief civic innovation and development officer for the city.

“Sports betting is the first big change in gaming in Mississippi since we were allowed to facilities off the water and on the land, which happened after Hurricane Katrina,” Kirkland said. “The expectation across the board is it’s going to be a significant boost to our gaming businesses, from betting to food and beverage, retail, gas.

“It won’t just be limited to football weekends. Certainly, football will be a huge attraction for those in this region who enjoyed betting on (games) without the benefit of legal protection.”

As of now, two sports betting operations are open in Biloxi, at the Beau Rivage and the IP. The other nine casinos along the Mississippi Coast figure to open shortly after they receive approval from the Mississippi Gaming Commission next week.

All of this activity has happened in less than 90 days since the Supreme Court ruling on May 14 that overturned the Professional and Amateur Sports Protection Act, which prohibited states (other than Nevada, which was grandfathered) from allowing sports betting.

Kirkland said that casinos reported customers driving in from throughout the southeast on Thursday, and that was for the opening night of NFL preseason action.

“In talking with our casino operators, nobody knows what the first year is going to bring to the bottom line, but the different revenue streams will be positively impacted.”

One interesting component as it relates to the city and tax dollars collected are future wagers, which in some cases are made months in advance. The city collects between 11 and 12 cents in tax on the casino’s net win each month, and those future-bet dollars will put money in the tax coffers that much sooner.

“When the bet is booked, it will be considered gross gaming revenue,” Kirkland said. “Once those results are known, you’ll actually get to the net.

“Here we are in August. You’re going to have people bet on the Super Bowl, (college football) conference championships. That money will go in as a win (for the casinos) right now.”

Mississippi is the third state to offer legalized sports betting, behind Nevada and New Jersey. West Virginia is expected to become the next state to join the fray as soon as the end of this month.

“The fact that Mississippi is the only regional state offering sports betting is big,” Kirkland said. “We’ve certainly got a window of opportunity.”