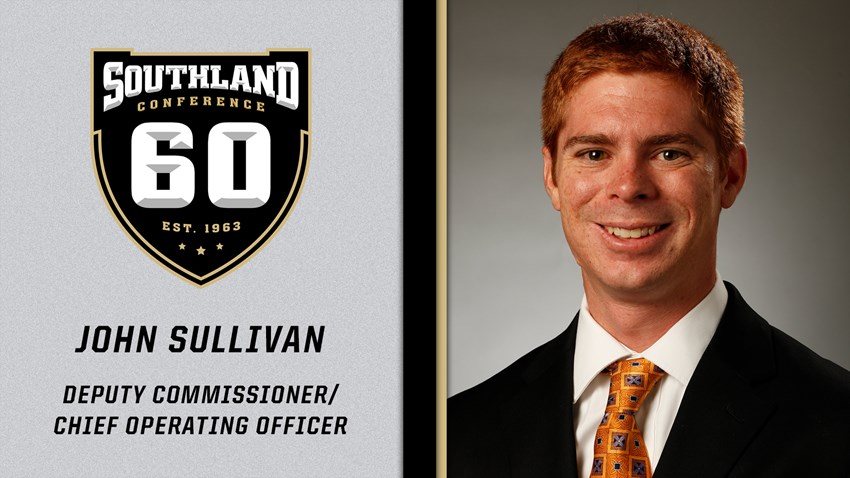 FRISCO, Texas – The Southland Conference today announced that it has further strengthened its leadership team with the addition of Deputy Commissioner John Sullivan.

In his dynamic role, Sullivan will be engaged in several facets of the cConference’s operations, primarily overseeing the Southland’s long-standing partnerships with ESPN and Van Wagner and serving as the Conference’s liaison to the athletic directors. He will oversee the sport management of football, including a lead role in the Conference’s host responsibilities for the NCAA Division I Football Championship Game and men’s basketball programs, as well as men’s and women’s golf. He joins the Southland after 12 years of service to the Mountain West.

“In the relatively small world of college athletics, word on top talent gets around, so we’re fortunate to add a leader of John’s caliber to our phenomenal team to rise to any challenge for our conference,” said Commissioner Chris Grant. “He left an indelible positive mark on the membership in the Mountain West and is well known for simply outworking everyone else. He does more than just add to our strength as a conference; we’re sure he’ll multiply it.”

After winning All-America honors as a placekicker in his senior season at the University of New Mexico (which he played after a relatively short, non-surgical rehabilitation from a massive knee injury), Sullivan completed a master’s degree in sports management at Fresno State. After two months of an internship at the Mountain West, he was offered a full-time role that led to 12 years of service in the league’s Colorado Springs headquarters. Along the way, he earned a reputation as an innovator with a relentless focus on the student-athlete experience.

“In college athletics, the student-athlete experience is the top priority that informs all other priorities,” said Sullivan, a native of Tehachapi, California. “It’s a priority I shared with not only the incredible team at the Mountain West but also the driving passion for Commissioner Grant and the Southland member schools. When that is top of mind, the other priorities flow more easily into place.”

At the Mountain West, Sullivan began his career as a Championship Coordinator in 2010, then was promoted to Assistant Commissioner for Championships in 2015. Then, in 2018, he was named to the Associate Commissioner role he now leaves behind. Sullivan, his wife, and two daughters will make their home in the Frisco area.

“With the member schools, the storied tradition, and the incredible pool of athletic talent in the conference’s geographic footprint, the sky is the limit at the Southland,” said Sullivan. “After ten years of calling Chris Grant a friend, I’m excited to help accelerate his vision and set a new standard for the good that is possible in intercollegiate athletics. Let’s get to work.”