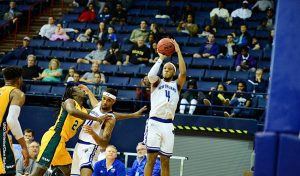 Joining Harris on last season’s second team was then-sophomore guard Ian DuBose, who averaged 16.9 points and 6.3 rebounds per game in Southland action. The league’s Newcomer of the Year in 2019, Mitchell ranked fourth in field-goal percentage (.566) and sixth in rebounds per game (7.1) to go with 13.4 points per game against Southland opponents.

Robinson averaged 12.7 points per game during his junior campaign and was one of the top shooters from beyond the arc, ranking sixth in the conference with a .367 mark in league contests. After the Privateers’ leading scorer Ezekiel Charles went down with an injury, Robinson’s per-game scoring jumped to 13.5 over the final 10 games of the regular season.

Central Arkansas and McNeese each earned two spots on the preseason all-conference second team. The Bears placed center Hayden Koval and point guard Deandre Jones on the squad, and the Cowboys were represented by seniors Roydell Brown and Sha’Markus Kennedy. Lamar guard/forward T.J. Atwood rounded out the second team.

The preseason teams were chosen by a poll of the conference’s head coaches and sports information directors. Voters were not allowed to select their institution’s players.