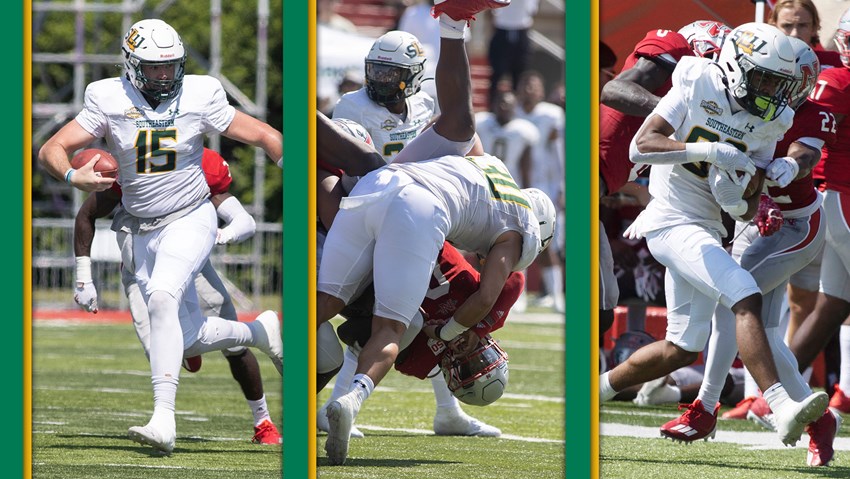 HAMMOND, La. – The No. 14 Southeastern Louisiana University football team’s 58-48 victory at No. 25 Nicholls resulted in the Lions sweeping the Southland Conference Player of the Week honors released by the league office on Monday.

Larvadain and Kelley earned state player of the week honors from the Louisiana Sports Writers Association as well, the LSWA announced on Monday.

Kelley was also named the Stats Perform FCS National Offensive Player of the Week on Monday.

It’s the second national honor this week for Kelley, who was selected the College Football Performance Awards FCS National Performer of the Week on Sunday. Earlier on Monday, Kelley was named the Southland Conference Offensive Player of the Week for the third time this season. His national weekly honor from Stats Perform is the third of his career, as he took home the award following the Central Arkansas game in 2019 and the Southern Illinois game this spring.

Ramos led SLU with 12 tackles and was a key contributor to the defensive effort in the win over Nicholls. Though the Lions yielded 507 yards, Southeastern made enough big plays, including interceptions by Zy Alexander and Alphonso Taylor, to earn a double-digit victory.

A two-time All-Southland Conference performer, Ramos led the Southland in tackles in the spring and is once again one of the key contributors on the Lion defense. The Salinas, California native leads SLU with 32 tackles through five games.

Saturday marked a breakout performance for the dynamic Larvadain in his first season with Southeastern. After Nicholls had trimmed a 17-point halftime deficit down to three late in the third quarter, Larvadain answered with a 100-yard kickoff return for a touchdown – tied for the longest return in program history and SLU’s first kickoff return score since 2017.

Larvadain had played a part in the Lion building up the initial lead with a 76-yard touchdown reception late in the second quarter. The freshman is averaging 35.6 yards per kickoff return and has caught six passes for 119 yards and a touchdown this season.

In the win over the Colonels, Kelley engineered an offense that finished with 573 total yards and 32 first downs on the way to its highest scoring output this fall. The reigning Walter Payton Award winner threw for a career-high five touchdowns, amassing 406 yards on 29-for-38 passing, while also leading SLU with 55 yards and two scores on the ground.

Gifted with a vast array of weapons at the skill positions and a consistently excellent offensive line, Kelley is building a season for the ages as the leader of the prolific Lion offense. Through five games, the Lafayette, Louisiana native leads FCS in completion percentage (74.5), points responsible for (152) and total offense (440.4 ypg), having thrown for 1,999 yards and 18 touchdowns, while also rushing for a team-high seven touchdowns.

His passing and rushing touchdown totals have already matched his totals from the spring, when he won the FCS version of the Heisman Trophy. On Saturday, Kelley, who has started 12 games as a Lion after playing 13 games as a reserve in 2019, broke the school’s career record with 72 touchdowns responsible for (46 passing, 24 rushing, two receiving).

Southeastern will open its 2021 home schedule next Saturday, welcoming Houston Baptist for a 4 p.m. Homecoming contest in Strawberry Stadium. The game will be televised on ESPN+, while also being heard in the Hammond area on Kajun 107.1 FM, The Highway 104.7 FM and The Boss 103.7 FM/1400 AM, as well as online at www.kajun107.net.