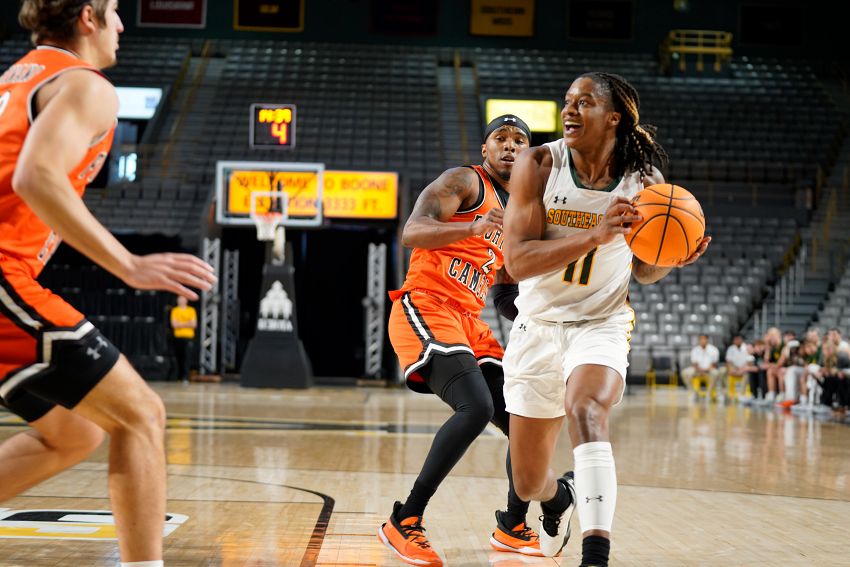 BOONE, N.C. – The Southeastern Louisiana University men’s basketball team found itself fighting from underneath for the second straight evening, trailing Campbell by 20 points with less than five minutes remaining in the game, but this time the rally was completed as Boogie Anderson’s floater in the lane with :00.3 left capped a 29-8 run and gave the Lions a 70-69 win over the Camels Saturday evening at the Holmes Convention Center in the Appalachian State Multi-Team Event.

Both teams struggled to find the range in the first half as neither team hit for a high percentage early on. However, with the game tied at 14-14, the Camels started to hit shots as Campbell went on an 8-0 run to open up the lead for the first time. Campbell held an eight-point lead at the half, 30-22.

The first basket of the second half gave the Camels their first double-digit lead of the contest as a three-pointer made it 33-22 just more than 30 seconds into the last 20 minutes. Campbell continued to open the lead slowly and steadily until the lead hit its peak of 21 points with just less than nine minutes remaining at 54-33.

Southeastern answered with a 6-0 run as Anderson stole the ball and went down the court for a lay-up to cut the deficit down to 15 points at 54-39 with seven minutes left. Campbell immediately answered with five straight points to push the advantage back to 20 points at 59-39. The two teams then traded buckets to put the Camels up 61-41 with just less than five minutes left in the game

But suddenly, the shots started to fall for SLU while Campbell went cold. Alec Woodard got things started as he quickly got down court following the Camel bucket and drained a quick three to get the big rally started. In a minute, the deficit was cut by eight points as a three by Roscoe Eastmond made the score 61-49 as the clock ticked under four minutes left. It took another minute and a half to get the deficit under double digits as a Sami Pissis fastbreak bucket made the score 63-55 Camels with 2:20 left.

Campbell hit free throws down the stretch to keep the Lions at bay until there was less than a minute left in the game, but that’s when the free throw tide turned, and it favored Southeastern with Sami Pissis as the main catalyst. With less than 50 seconds remaining, Sami Pissis was fouled shooting a three-pointer and hit all three ensuing free throws to cut it to four at 67-63. But the key moment of the comeback came with 14 seconds left as Boogie Anderson hit the first of two free throws, but when he missed the second, Roger McFarlane was fouled fighting for the rebound. McFarlane hit both to make the score 69-68. SLU fouled Campbell quickly after the inbounds, but the Camels shooter missed both and the Lions got the rebound. After a timeout, Matthew Strange got the ball to Anderson who immediately drove the line, put up a floater from just inside the free throw line, and got the shot to fall with :00.3 left on the clock for the game’s final points and SLU’s first lead since 10-9.

Sami Pissis was assertive all night, and it led to him living at the free throw line where he went 12-for-12 at the charity stripe, many of them in crunch time during the comeback. He finished with a team-high 20 points on the night along with a steal. Anderson was eight-of-10 from the field in the contest and finished with 17 points to go with four rebounds, four assists, a block, and three steals. Christian Agnew and Eastmond each finished with seven points. McFarlane, for the second time this season, broke double digits in rebounding, grabbing 12 board to go with six points, a steal, and an assist.

Both teams hit 23 shots in the game, though SLU shot 37.1% in the game while Campbell hit on 42.6%. Southeastern took advantage of the Camel miscues, scoring 23 points off turnovers while Campbell got just six points off Lion mistakes. SLU were also best on the run, getting 26 fast break points to just eight for the Camels.

The Lions (3-2) look to end the Appalachian State Multi-Team Event on Sunday afternoon on a high note when they take on the host Appalachian State, who will be looking for their first win in its own event. Tip-off of Sunday’s game against the Mountaineers (3-2) is set for 2:30 P.M. EST/1:30 P.M. CST at the Holmes Convocation Center.