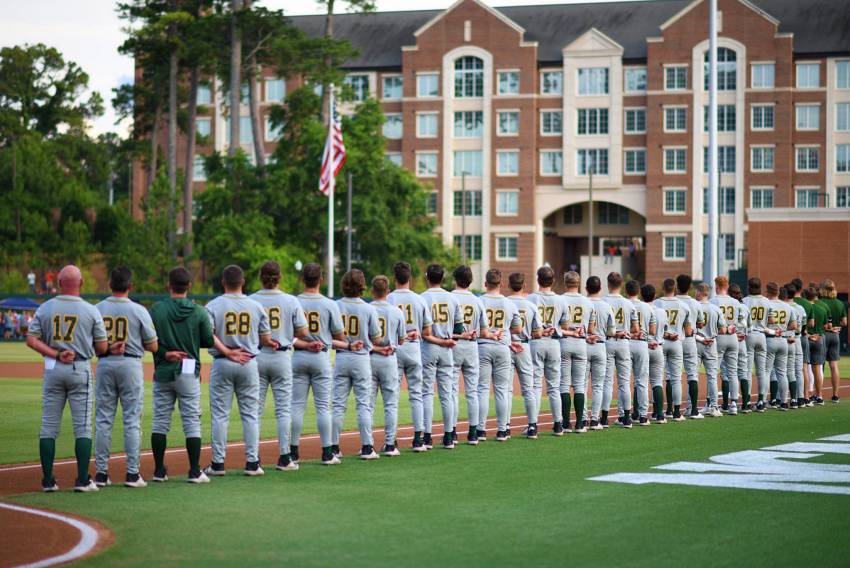 AUBURN, Ala. – An 11-run first inning propelled top-seeded Auburn to a 19-7 victory over No. 4 seed Southeastern Louisiana University on the opening day of the NCAA Baseball Auburn Regional Friday night at Plainsman Park.

Southeastern (30-30), making its sixth regional appearance as a Division I member and first since 2017, will face No. 2 seed UCLA in a noon elimination game on Saturday. Auburn (38-19) advances to take on third-seeded Florida State, which defeated the Bruins, 5-3, in Friday’s opening game.

Evan Keller and Tristan Welch led SLU at the plate with two hits apiece. Keller and Shea Thomas each drove in a pair of runs, while Tyler Finke hit a solo home run for the Lions.

The Tigers jumped on top versus SLU starter Adam Guth (4-2) in the bottom of the first inning. After a leadoff single by Blake Rambusch, Cole Foster launched a home run high over the 30-foot left-field wall to give AU the early advantage.

Two batters later, Bobby Peirce padded the lead with a two-run shot over the centerfield fence. Later in the frame, Foster cleared the bases with a grand slam, while co-SEC Player of the Year Sonny DiChiera followed with a solo home run of his own. All told, the first eight Auburn batters reached and SLU fell in an early 11-0 hole in an inning that saw 14 Tigers come to the plate.

Cole Foster with HR's from both sides of the plate in the first inning!! ARE. YOU. SERIOUS⁉️ 🤯🤯🤯🤯

Finke put the Lions on the board to lead off the top of the second inning. The SLU senior drilled his 10th home run of the season over the left-field Green Monster to cut the deficit to 11-1. Auburn got the run back and added another in the bottom of the second to increase the lead to 13-1.

Southeastern put up a crooked number for the second straight inning in the top of the third. A two-run single by Thomas pulled the Lions within, 13-3. SLU added to its tally in the top of the fourth, as consecutive doubles by Christian Garcia and Welch trimmed the Auburn advantage to 13-4.

Auburn added to its tally in the bottom of the fourth inning. Foster’s third home run of the contest – a three-run shot over the right-field fence – pushed the Tiger advantage to 16-4.

The score remained the same until the Lions pulled closer in the top of the eighth inning. Pierce Leavengood doubled home the frame’s first run, then Keller drove in two runs with a double of his own to cut the Auburn lead to 17-7.

The Tigers scratched across two runs in the bottom of the eighth to close out their scoring. Southeastern went down in order in its half of the ninth.

Saturday’s elimination game versus UCLA will be televised on ESPN+ and can be heard online at www.LionSports.net/ListenLive.