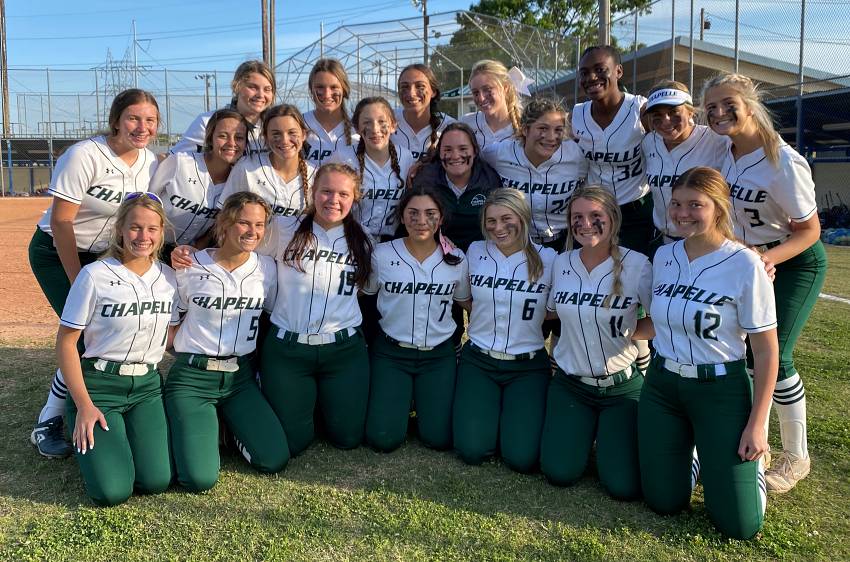 In the Division I softball quarterfinals Thursday, No. 4 Archbishop Chapelle advanced in style, routing No. 5 St. Joseph’s Academy 15-0 in a game shortened to 2 ½ innings by the mercy rule at the JPRD Complex in Metairie.

Chapelle amassed 12 hits. Gianna Falgoust, Hailey Harvey and Emma Ruddy all had multi-hit games for the Chipmunks. Harvey drove in four runs and Falgoust ended the game with a walk-off two-run single.

Archbishop Chapelle (17-14) advances to the semifinals to take on District 9-5A rival John Curtis Christian. The Lady Patriots swept the Chipmunks by scores of 12-4 and 12-1 in district play.

Hannan dominated early, scoring three runs in the bottom of the first inning, five more in the second and two in the third.

Tristyn Baugh picked up the win for Archbishop Hannan, hurling a three hitter. Baugh walked two and struck out five.

Kristyn Lormand took the loss for the Rebels. Hailey Anderson had a double for Teurlings Catholic (14-14).

The Hawks (20-8) will face fourth seed Thomas Jefferson in the Final Four.

The Jaguars routed No. 5 Parkview Baptist 13-3 in five innings at Terrytown Playground.

Thomas Jefferson put the game away early with eight runs in the first inning and four in the second to take a commanding 12-0 lead. The Eagles scored three runs in the bottom of the third before the Jaguars scored a run in the fifth inning to put it away early.

Thomas Jefferson (18-5) banged out 17 hits. Leading the way were Aubrynn Arcement, who went 3-for-4 with a home run and three RBI, Regina Fletcher, who was 2-for-3 with three RBI and Oscha Carter, who had two doubles and two RBI. Carson Heigle had two hits and an RBI, Caroline Burke had two doubles and a single and scored two runs scored and Brooke Taylor had two hits and two runs scored.

In the bottom of the first, St. Thomas Aquinas erupted for nine runs.

Morgan Gras drove in a run, Kelsey Deakle drove in another with a safety squeeze bunt before Madison Funding and Emily Wells each produced two-run singles, Krislyn Dapprich had an RBI single and two more runs scored on an error to give the Falcons a 9-1 lead.

The Knights scored a run in the top of the second to make it 9-1.

In the bottom of the second, Deakle singled home another run to make it 10-1.

After LCA scored two in the top of the third inning to make it 10-3, the Falcons scored three runs in the bottom of the fifth to end it. Ali Girard singled home a run before Gras belted a two-run home run to walk it off.

Deakle was the winning pitcher.

The Falcons (19-6) advance to the semifinals to battle No. 3 Holy Savior Menard, who dismissed No. 6 Northlake Christian 11-2.

Also in Division III, No. 5 St. Charles Catholic also advanced to the Final Four with a 15-7 victory over No. 4 Houma Christian.

The Comets (16-12) advance to the semifinals to battle top seed Notre Dame, who advanced with an 11-1 victory over district rival Catholic of New Iberia in five innings.

In Division IV, the magical ride for No. 12 Riverside Academy continues.

Tied 3-3 in the bottom of the seventh inning, freshman Corrin Cashio produced a dramatic game-winning hit with a walk-off RBI double to decide it.

Alainah Felton homered for the Lady Rebels while Emily Vicknair went the distance to pick up the win.

Riverside (19-7) advances to the semifinals to take on the winner of No. 1 Calvary Baptist and No. 8 Opelousas Catholic.