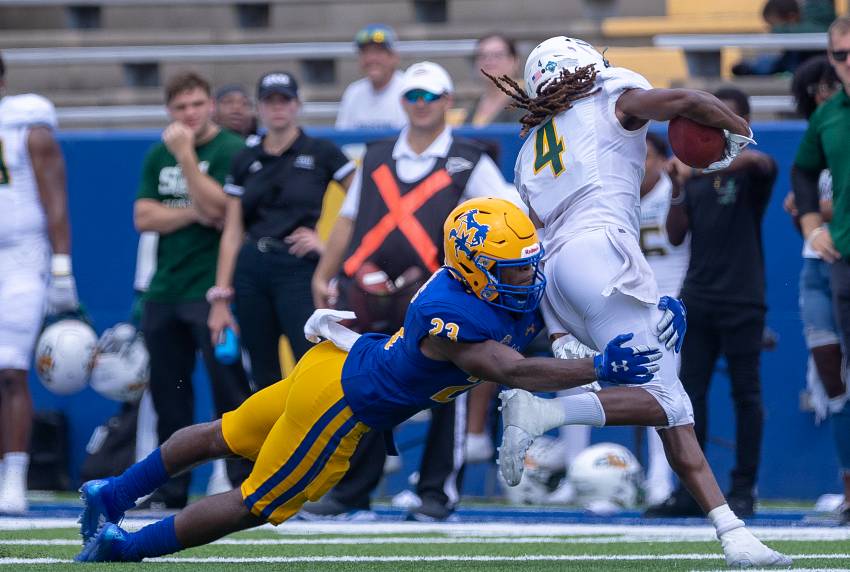 This week’s Offensive Player of the Week, Kelley led a SLU offense that finished with 546 total yards and 30 first downs in a 38-35 win at McNeese in the Lions’ Southland Conference opener. Up next, SLU (3-1, 1-0 SLC) travels to Thibodaux, La., to battle with River Bell Classic rival Nicholls at noon CT on Saturday.

Kelley was named the Louisiana Sports Writers Association Offensive Player of the Week in an announcement from the LSWA on Monday.

Kelley’s state honor is his third of the season, as he was previously recognized following his performances in wins over North Alabama and Central Connecticut State. Earlier on Monday, the reigning Walter Payton Award winner was named the Southland Conference Offensive Player of the Week for the second time this season.

Defensive Player of the Week honors go to Williams, who recorded a career-high 17 tackles and a pair of tackles for loss in the three-point loss to the Lions. His 15 solo tackles are the most by an FCS player this season. The Cowboys (1-3, 0-2 SLC) are idle this week before a road matchup with Northwestern State at 3 p.m. on Oct. 16.

Buell is the Special Teams Player of the Week after averaging 47.8 yards per punt on 10 attempts in a loss to Nicholls on Saturday. He landed five inside the 20-yard line and booted four for 50+ yards, including a long of 65 yards. The Huskies (0-4, 0-1 SLC) aim to get in the win column when they host Northwestern State a 6 p.m. on Saturday.

Offensive Player of the Week: Cole Kelley, Southeastern – Senior – Quarterback – Lafayette, La.
The reigning Walter Payton Award winner completed 36-of-49 passes (73.5 percent) for 391 yards and three touchdowns, while also rushing for a team-high 65 yards and a score against McNeese. After being picked off on the opening drive, Kelley responded by going 13-of-17 for 83 yards through the air and carrying the ball five times for 26 yards on the next three series. All three ended in scoring drives as SLU raced out to a 17-7 advantage. This marks Kelley’s second weekly award of the season and the third of his career.

Defensive Player of the Week: Kordell Williams, McNeese – Junior – Linebacker – Carencro, La.
Williams was all over the field for McNeese with a career-high 17 tackles, including 15 solo stops, and a pair of tackles for loss in the Cowboys’ loss to No. 14 Southeastern. His 15 solo tackles are the most by an FCS player this fall. This is Williams’ first career Player of the Week honor.

Special Teams Player of the Week: Brady Buell, HBU – Senior – Punter – Traverse City, Mich.
Buell averaged 47.8 yards on 10 punts, landing five inside the 20 and four over 50 yards, including a long of 65 yards. Nicholls had minus-4 yards on its four punt returns, and the Colonels also muffed a punt to set up HBU’s second touchdown. This is Buell’s second weekly honor of the season.