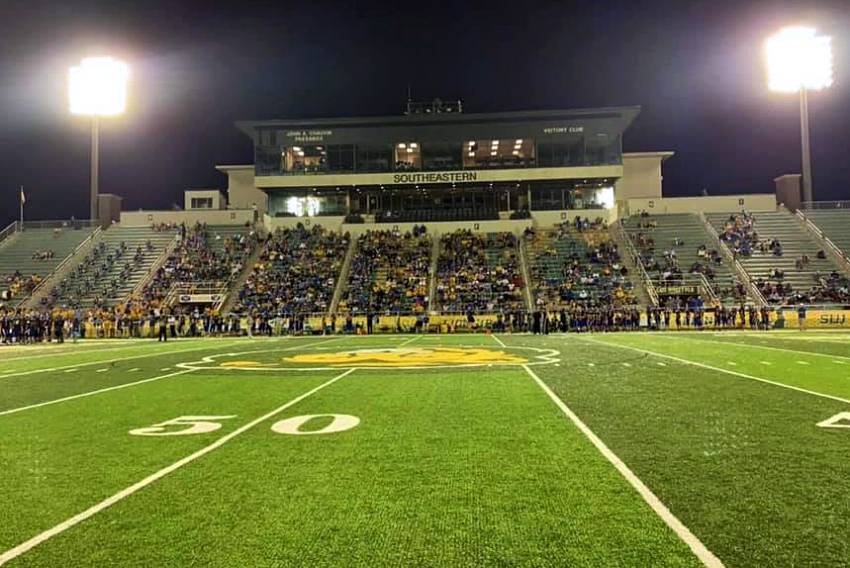 Saturday is the Gold Out game in Strawberry Stadium. Southeastern fans are encouraged to wear gold.

Southeastern opened its four-game home stand with a 70-6 victory over Central Connecticut State last Saturday. The single-game scoring total (5th) and margin of victory (6th) were among the largest in program history.

SLU scored touchdowns on its first five drives of the 2022 season, outgaining the Blue Devils, 601-214. In the victory, the Lions finished with 32 first downs while limiting the visitors to nine.

Quarterback Cephus Johnson III is the reigning Southland Conference Offensive Player of the Week and leads a SLU offense that is averaging 28.7 points and 369.0 yards per contest. Johnson III (463 yards, 2 TD, 1 INT) and Eli Sawyer (184 yards, 2 TD, 0 INT) have split time under center for the Lions.

Carlos Washington Jr. leads Southeastern with 124 yards and three touchdowns on the ground. Taron Jones, Rodeo Graham Jr., Jessie Britt and Logan-Greene all have rushing touchdowns to their credit.

Henderson, the reigning Southland Defensive Player of the Week, leads the team with 2.5 tackles for loss. Henderson is one of three Lions with an interception this season, along with Christophe and Garrett Crawford.

On special teams, Austin Dunlap is currently sixth nationally with a 45.9 punting average, while Darius Lewis is seventh in FCS with a 13.6 punt return average.

UIW is the highest-rated opponent to visit Strawberry Stadium since the Lions defeated No. 4 Sam Houston in the 2013 regular season. The Cardinals have been dominant, defeating Southern Illinois (64-29), FBS foe Nevada (55-41) and Prairie View (31-14).

UIW is yielding 28.0 points and 342.7 yards per contest. Buck Buchanan Award candidate Kelechi Anyalabechi leads the Cardinals with 30 tackles, while Chris Whittaker is atop the team with six sacks.

UIW leads the all-time series versus the Lions, 5-4. The Cardinals have won the last four meetings between the SLC rivals. Last season, UIW won a 55-52 shootout over SLU in a game that featured 1,485 yards of total offense.

Following this week’s action, the Lions will continue their home stand next Saturday at 6 p.m., hosting Murray State. The game will be televised on ESPN+ and can be heard on the Southeastern Sports Radio Network (Kajun 107.1 FM, The Highway 104.7 FM, The Boss 103.7 FM/1400 AM).

Next Saturday’s contest versus the Racers will also be the Hall of Fame Game. Kevin Fogg (baseball), Harlan Miller (football) and Natalie Santana (soccer) will be honored at halftime of the football game after a private induction ceremony is held earlier in the day.