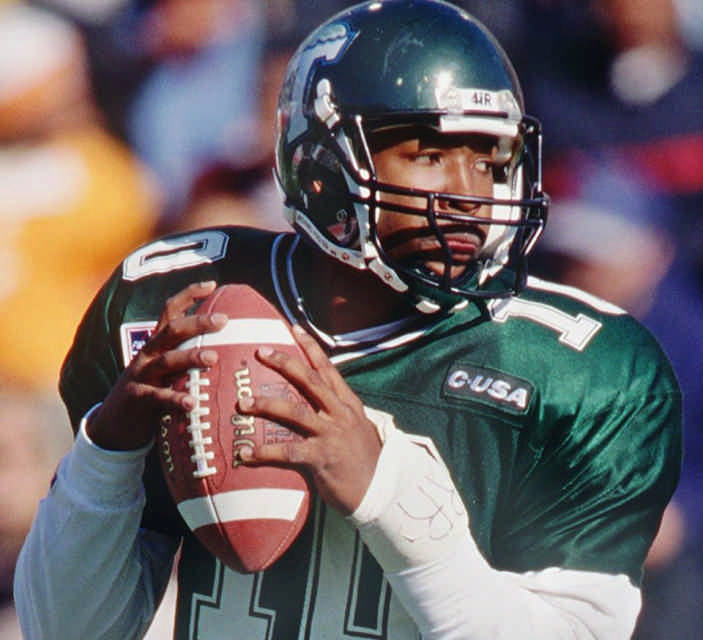 NEW ORLEANS – Shaun King, who led Tulane football to one of the greatest seasons in program history, has been selected for induction into the Allstate Sugar Bowl’s Greater New Orleans Sports Hall of Fame Class of 2022.

Twenty-seven years ago this summer, a quarterback from Gibbs High School in St. Petersburg, Fla., arrived on the Tulane campus with the goal of turning around a program that had not won more than seven games and had only been to one bowl game in the last 15 years.

By the time Shaun King left New Orleans four years later, he had done that … and more.

For his accomplishments, King is one of six members of the 2022 induction class of the Allstate Sugar Bowl Greater New Orleans Sports Hall of Fame.

The honor comes nearly a quarter-century after he spearheaded the greatest season in the modern era of Green Wave football – a perfect 12-0 campaign in 1998 – and helped changed the sport in the process.

King signed a national letter-of-intent in February 1995. “One of the things that never factored in (recruiting) was the success of the program,” King said. “I figured wherever I went, the winning would figure itself out.

“This is pre-internet, pre-social media, (so) I wasn’t very familiar with Tulane or the city of New Orleans. My parents were in love with the academic part.”

King quickly got his chance. In the fourth game of his freshman season at Southern Miss, following an injury to starter Aley Demarest, King was thrust into the spotlight.

He would go on to become the first freshman in Tulane history to pass for 1,000 yards, but 1995 and 1996 would be a series of near-misses for the Green Wave, going 0-8 in games decided by a touchdown or less.

What came next would be a decision that would change the fortunes of King and the entire program. The Tulane administration made a coaching change, bringing in Auburn assistant Tommy Bowden. While the Bowden name was among the most famous in college football, Tommy Bowden brought along a relative unknown from Glenville State University to be his offensive coordinator – Rich Rodriguez.

“The game of football, we started to change it,” King said. “It took a guy with nothing to lose like Rich Rodriguez to make it happen. He had this offense that he thought could be really good.”

The concept of spread football with run concepts – now a part of just about every scheme in America – would first be introduced to Division I college football over the course of the next two years Uptown.

“It wasn’t run and shoot,” King said. “It was balanced. We put the guys we had in space.”

In the first year that Bowden, Rodriguez and King were together in 1997, Tulane would improve by five wins, finishing 7-4 and in second place in Conference USA. King was the C-USA Offensive Player of the Year, passing for 2,567 yards and 24 touchdowns while also rushing for 511 yards and five more scores.

And it set the stage for what was to come in 1998. A season that ended in perfection was not, however, without its share of adversity.

After a 2-0 start on the road, Tulane returned home to face Navy. With Hurricane Georges bearing down on the Gulf Coast and much of southeast Louisiana under a hurricane warning, the Green Wave improved to 3-0 with a 42-24 victory over the Midshipmen, but the storm threat wasn’t the only adversity Bowden’s team was facing.

King had fractured his left wrist during the game. With players, coaches and staff scattering to evacuate from Georges’ path, the news wasn’t known until Tulane returned to campus a few days later to begin preparations for the Wave’s biggest test of the year, with Southern Miss coming to the Superdome the following Saturday.

There was never a doubt, however, that King would play against the Golden Eagles.

“I (evacuated) to Baton Rouge … (and) I didn’t realize I had broken my wrist,” King recalled. “I fell at some point during the game, and I went to brace myself with my left hand, but I played the rest of the game.

“I knew we had a chance to be really good, so I wasn’t going to have surgery. Then we started figuring out if we could come out with a soft cast. I kind of really was uncomfortable, but I wasn’t sitting out. Southern Miss had kicked our butt every year.”

King and Jeff Curtis shared time against USM, but it was the defense who starred, forcing six turnovers in a 21-7 victory. Tulane would enter the top 25 polls the following week and not look back.

After a close call two weeks later against Louisville, King and the offense dominated the rest of 1998, scoring 40 or more points in every game the rest of the season, including 72 against Louisiana-Lafayette and 63 in the Thanksgiving night regular-season finale against Louisiana Tech, en route to the school’s first (and only) conference title in football since 1949.

King – despite playing the final eight games of the regular season with a soft cast on his injured wrist – completed 67.2 percent of his passes for 3,508 yards and 38 touchdowns, shattering his own school single-season record, one of eight he still holds. His passer rating of 183.3 set an NCAA record. King also executed the read option to perfection, rushing for 641 yards and 11 scores.

With Tulane reaching the top 10 in the final regular-season polls, King finished 10th in the Heisman Trophy voting.

Bowden announced shortly after the Louisiana Tech victory that he was departing for Clemson. When Tulane made the surprising move not to promote Rodriguez and instead hire Chris Scelfo as head coach, there was the opportunity for more adversity and distraction, but King and his teammates would not let it happen.

“Tommy leaving wasn’t a big deal,” King said. “For one, we thought he earned it, and two, we thought Rich Rod was going to be the coach. What put a sour taste in everybody’s mouth was the fact that Rich was under the assumption he was getting the job.”

With Scelfo as head coach and Bowden’s staff serving as assistants, Tulane defeated BYU 41-27 in the Liberty Bowl on New Year’s Eve. The Green Wave shredded a Cougar defense ranked fifth nationally to the tune of 522 total yards, including 276 passing and 109 rushing by King.

“(We wanted) to send Rich out on a high note,” King said.

King had played himself into a pro prospect. He would be the 50th pick of the 1999 NFL Draft by his hometown team, the Tampa Bay Buccaneers – which quickly erased the disappointment of the delay in being picked.

“It was (Bucs coach Tony) Dungy, and it was home, and that made it okay,” King said. “And, I was going to a really good team. It was bittersweet, but it was worth it because of where I ended up.”

After watching from the sidelines for the first 10 weeks of the 1999 season, King’s chance came when starter Trent Dilfer broke his collarbone in a game at Seattle – coincidentally, the same injury that gave King his chance to play at Tulane four years prior.

King would win five of his first six starts as a rookie to lead the Bucs to the NFC Championship Game against the St. Louis Rams. And like fans in New Orleans would come to learn two decades later, an officiating decision played a big role in the final outcome against the Rams.

With Tampa Bay driving for what would have been the winning score, a King completion to Bert Emanuel was overturned by replay.

“I didn’t think it was that big a deal,” King said of his early success, “because I hadn’t experienced failure at the NFL level. Not only can I do this, but I can do it at a high level.

“The Rams (game), I was in a daze because I didn’t know the play was being reviewed. All of a sudden, we’re in a completely different game situation.”

King started all 16 games in 2000, leading Tampa Bay to a 10-6 record, but the Bucs acquired Brad Johnson before the 2001 season and King went back to the bench.

He played parts of four more seasons in the NFL, three in Tampa and one with Arizona. He earned a Super Bowl ring as a backup on the Super Bowl XXXVII champion Bucs in 2002.

King, who has been in broadcasting and coaching since his playing career ended, is looking forward to the chance to have his family on hand when he is the first member of the 1998 Tulane team to be honored by his adopted hometown.

“For me, I feel like this is more about the whole team getting recognized,” he said. “(In 1998), the city kind of rallied around Tulane. That was a really good group of student-athletes. To be able to represent them is a huge honor. This is the first time that my family will be able to see their dad, their husband, acknowledged. We’re honored to be honored.”

King is one of six standout local sports figures who will be added to the Hall of Fame this year. Each year’s Hall of Fame class is selected by the Greater New Orleans Sports Awards Committee, a group of current and former media members who annually recognize a variety of annual award-winners, as well as the Hall of Fame, the Corbett Awards and the Eddie Robinson Award. The group also selects the Greater New Orleans Amateur Athlete of the Month each month.