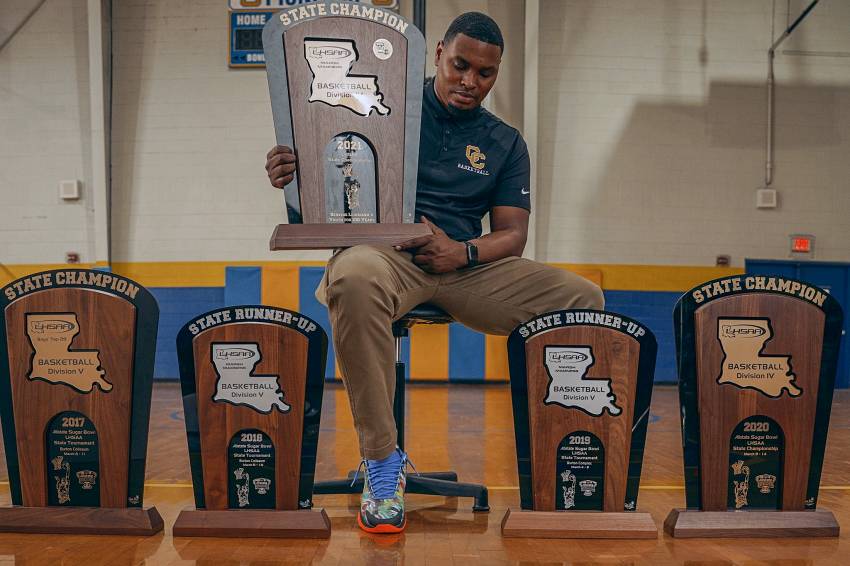 After winning three state championships and reaching the state title game in each of the last five seasons at Crescent City Christian, Shaun Dumas departed the Metairie school to fulfill a dream of his own by opening his own school in Metairie.

Shaun Dumas Academy has opened its doors as a grade 6-12 prep school on North Causeway Blvd. in Metairie and is competing in basketball in its first year.

The debut basketball game for SDA went well in a thrilling 49-48 win over Big Tyme Sports Prep of Rockwall, Texas at C.E. King High School in Houston, Texas as part of the Houston Tip-Off event.

Jordan Moore led the way with 16 points, eight rebounds and three assists and was named the game Most Valuable Player.

Ratliff, a key player for Booker T. Washington a year ago, blocked a shot and collected the rebound to secure the victory.

The Lions trailed most of the way before rallying to win.

SDA will play 33 games against a national schedule and will not compete for LSHAA honors. The Lions will play home games at the Val Reiss facility in Chalmette.

The Lions will next play Nov. 24 in the Thanksgiving Classic in Houston.

“I think the first game was a success,” Dumas said. “The guys found a way to band together and play like they love each other. That’s our motto. You have to do everything in love and that you love each other. You could tell we had some early jitters but we figured it out.”

Dumas said the focus on one end of the court turned the game around.

“We did a great job on the defensive side in wearing them down and making some things happen in the second half. We swarmed them with our speed,” The guys just rallied and found a way to will each other to a win.”

In its infant stages, Dumas feels the small school has big growth potential.

“It feels like purpose,” Dumas said. “One of the things for me is to use sports as a ministry and to help student-athletes thrive. It was surreal to see the looks on the kids’ faces. For me, it was a dream coming to fruition. We are humbled to be in this position to help Louisiana basketball. It’s a beautiful thing and we really want to soak in it.”

The current enrollment at SDA is currently at 27. The basketball team has 14 members.

“Ultimately, the vision is to be able to have as many as 300 students at our academy,” Dumas said. “We want to expand in football and in other sports. We have a travel football team for ages 12-14 this year. We have tryouts this weekend. We just want to impact youth.”