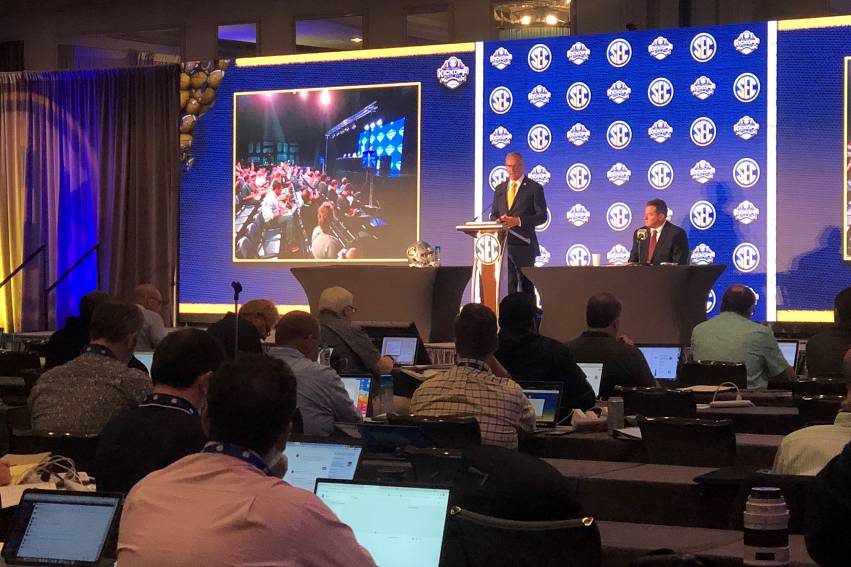 It’s great to be back at SEC Media Days.

It’s great to be talking football.

One of the weirdest things about this year’s edition after a one-year hiatus is the absence of fans. The lobby here at the Wynfrey Hotel was void of the autograph seekers and just plain media day watchers.

Here are some other things that stood out as the media days kicked off Monday, and LSU took its turn at the event in Hoover, Ala.

SEC commissioner Greg Sankey spoke extensively about the pandemic and the Delta variant that has boosted COVID case numbers across the country. He made it clear that the league will not postpone any games.

If a SEC team has an outbreak of the virus on their club and is unable to field a roster of 53 scholarship players, a team will forfeit.

Sankey explained that last year’s schedule had some flexibility built into it for COVID but the 2021 slate he says.

LSU head coach Ed Orgeron said he cannot order his players to be vaccinated, but he said his message to his players will be to not let anything stand in the way of the team competing for a championship.

Sankey was asked about the upcoming move of the top weekly league games to the ABC and ESPN platform. He said the 2:30 p.m. Central time window, currently held by CBS, will continue with ABC/ESPN. In a change though, the late national TV window (primetime) will also be utilized more frequently.

Orgeron made an interesting comment about the battle to be the starting quarterback between Myles Brennan and Max Johnson. He said every play in practice and in scrimmage will be charted and go “into the computer” but he may make the decision with his gut.

Orgeron said he plans to make the decision on who will start behind center the week before LSU plays at UCLA on September 4th at the Rose Bowl.

On the road again

Offensive tackle Austin Deculus certainly enjoyed his flight to Alabama and his time at media days. The Tigers right tackle even asked a reporter from Baton Rouge whether he flew or drove to Birmingham?

A media member volunteered an answer.

“We are local TV reporters,” said the reporter. “We always drive.”

Representing WGNO-TV, we interviewed Charles Hanagriff, a veteran Baton Rouge radio reporter who also hosts an LSU football postgame. He also works for the marketing company MatchPoint that helps connect businesses with what he says are about a dozen LSU athletes. Among his clients are quarterback Myles Brennan and quarterback Derek Stingley, Jr.

Hanagriff said if name, image and likeness (NIL) opportunities would have been in place last football season, quarterback Max Johnson would have had a marketing deal before he “hit the locker room” after LSU’s upset of Florida.

MatchPoint keeps nine percent of proceeds from any deal struck between athlete and business.