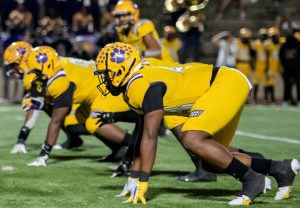 Most observers feel is the unofficial Division I Select state championship game.

Were it not for three victories forfeited by Karr early in the season, the Cougars would have been the top seed in the bracket.

Instead, Karr was relegated to the No. 7 seed.

Catholic, the defending Division I state champion, earned the No. 2 seed behind Warren Easton, whom the Bears defeated in New Orleans in the regular season.

Karr also defeated Easton on the field a week later but had to forfeit the victory to the Eagles for use of an ineligible player.

Karr is eligible, talented and motivated now. So is Catholic.

Unfortunately, the two powers hook up in the quarterfinals Friday at Memorial Stadium in Baton Rouge, rather than in the Caesars Superdome.

Fortunately, they hook up and excellence will be on display on both sides of the ball and field.

It is a rubber match and the Karr program has great familiarity with the venue.

Speaking on All Access on NASH ICON 106.1 FM, Karr coach Brice Brown answered the biggest question heading into the game, the health of Karr’s star quarterback, who injured his shoulder three weeks ago and did not play until the second half of the playoff opening win over Scotlandville, rallying the Cougars to victory.

“They are trying to figure out how AJ Samuel is going to be and we are as well,” Brown said. “He’s going to start this game. We are attacking this game as it is a state championship game. That’s how much respect we have for Catholic.

“I know Coach (David) Simoneaux is probably preparing the same way. It’s unfortunate that this game has to be played in the quarterfinals. We have to adapt to our circumstance and take it on.”

Having been there and done that twice at Memorial Stadium agains the Bears will help the Cougars this time around.

“We know how the locker rooms are, we know how the sideline has to be managed, so that makes it a little bit easier,” Brown said. “Now, our focus can be on what Catholic is doing offensively, defensively and on special teams.”

Brown said the Cougars learned from the first matchup with Catholic.

The two teams are similar.

“When I look at Catholic, I see a spitting image of us,” Brown said. “We have some great wideouts, we have a good offensive line and a great quarterback and good running backs as they do. Defensive coordinators are spending extensive time trying to figure out how to stop explosive plays and how to get off the field on third down.”

Both teams have improved as the season has progressed.

It may not be the official state championship game but the winner will certainly emerge as the favorite to win it all.