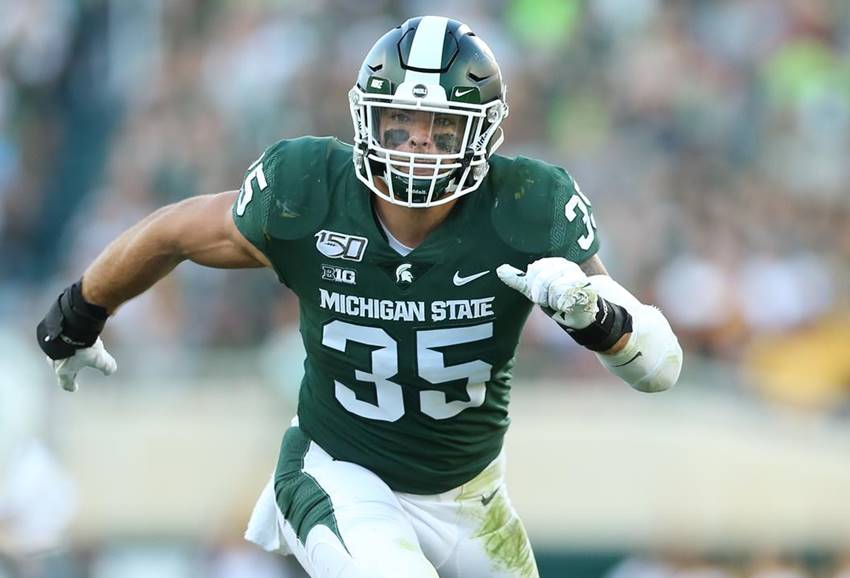 New Orleans Saints undrafted free agent rookie Joe Bachie was raised in Ohio’s Brook Park, a suburb of Cleveland. Subsequently, he grew up rooting for the Indians, Cavaliers and, most importantly, Cleveland Browns.

After signing after this year’s draft with New Orleans, Bachie had to adjust his loyalties. His vision of the NFL quickly expanded.

“When it hit that the undrafted situation was going to happen, it was late fifth round,” explained the 6-foot-1, 232-pound Michigan State product. “I was being reached out to by a couple of teams through my agent. I narrowed it down to three teams that I was looking at hard.”

Those three teams were the Saints, Raiders and Rams. New Orleans had advantages that paid off to secure Bachie’s services.

“I was always a Saints fan watching Drew Brees growing up. It was a great fit for me. Everything that they were telling me (made it) the right thing to do. It was a pretty easy choice once I looked at it.”

It was a high priority signing for the Saints. To put in perspective how much effort the team putting into securing Bachie, their seventh round pick last year, linebacker Kaden Elliss, received a $76,316 signing bonus. Bachie inked for an impressive $145,000 guaranteed contract plus a $15,000 bonus.

“Great coach, great city,” Bachie stressed. “They have a winning culture. I enjoy coach Payton, how he runs his team. I’m excited. It’s a great organization.”

Maybe most important in his quest to make it in the league, New Orleans provides a specific opportunity at his position despite an overall deep roster.

“I looked at the depth charts, all the rosters, financially, everything they were throwing at me was the best case scenario and the best situation for me to pursue this dream. They have some talented linebackers. They’ve proven they can win. They’ve got some guys that I want to go in there and compete with and (try) to make each other better.”

In 34 career starts at Michigan State as a three-year starter, Bachie paced the squad in tackles as a sophomore with 100 stops and as a junior with 102 more. His senior campaign was halted after eight games following a positive test for a performance enhancing substance. He claims that it was an over the counter drug that he had taken in the past and had passed other NCAA and Big Ten tests. He plans to use this setback as motivation.

Bachie performed well at the Indianapolis Combine, posting a 4.67 forty, a 33.5″ vertical and 26 reps on the bench press test. The 26 reps placed him second among all linebackers.

An instinctive and decisive player, Bachie takes good angles to the ball and often delivers teeth rattling tackles. He rarely takes a false step and diagnoses plays quickly and is very instinctive. Proven against the run, Bachie has improved his drops in zone pass coverage. He projects to be good on special teams, which will be important if he is to make the 52-man roster.

As for his new teammates, Bachie is familiar with a pair of Big Ten opponents with whom he will now be sharing an NFL locker room. Wisconsin linebacker Zack Baun and Michigan center Cesar Ruiz were the top two picks by the Saints. Their third choice,, Dayton tight end Adam Trautman, happens to be friend of Bachie’s.

“At the Combine, I talked to Baun a lot. We lined up alphabetically so we were next to each other. We talked a bunch. Adam Trautman is my buddy who I train with. I’m excited to get down there with them,” said an enthusiastic Bachie.

He has not faced off against Baun or Trautman on the field but that’s certainly not the case with Ruiz. Bachie had great respect for his in-state Big Ten rival.

“He’s a big, physical dude, that’s for sure,” Bachie said regarding Ruiz. “A great pick up by the Saints. He’s exactly what the Big Ten is. You play against the best week in and week out. He’s one of the best centers in the Big Ten and the country. It was a good matchup against him.”

The Saints will have to address the loss of starter A.J. Klein, who was third on the team in 2019 with 69 stops. Along with All-Pro Demario Davis, Alex Anzalone and Kiko Alonso are penciled in as starters but both are coming off of injuries that only add to their extensive histories of missing time. Anzalone has been limited to 11 starts since he arrived in 2917. Alonso missed time late last season with injuries before suffering the third torn ACL of his career in the playoff loss to Minnesota.

The Saints staff will be looking for depth at linebacker as a result but the chance to play on defense as a rookie may be a real possibility for Bachie as well. As mentioned, special teams is an ideal spot for him to make an impression that can lead to a treasured roster spot. Bachie feels his skills and experience will allow him the flexibility to play anywhere.

“Mike, Will, Sam, I want to show my versatility at the next level. That’s my biggest thing. When you look at my Michigan State film, I’m playing (middle) linebacker. I’m doing the same things over and over. I’m athletic enough to do all three linebacker positions and whatever they ask me to do,” noted Bachie.

Projected somewhere between rounds three and five of the draft, he would like to erase the stigma of the drug test issue. It likely hurt his stock more than anything. He wants to prove all doubters wrong regardless.

“I explained it. I don’t know if that was the reason. A lot of teams knocked my athleticism. I don’t know why, but I want to get out there and show everyone that there is a reason I was a two-time captain and a reason I was a midseason All American my senior year. I’m a good football player. Teams passed on me, but the Saints’ organization are going to get someone who is going to come in and work his tail off.”

A small investment may just pay off big for the Saints.