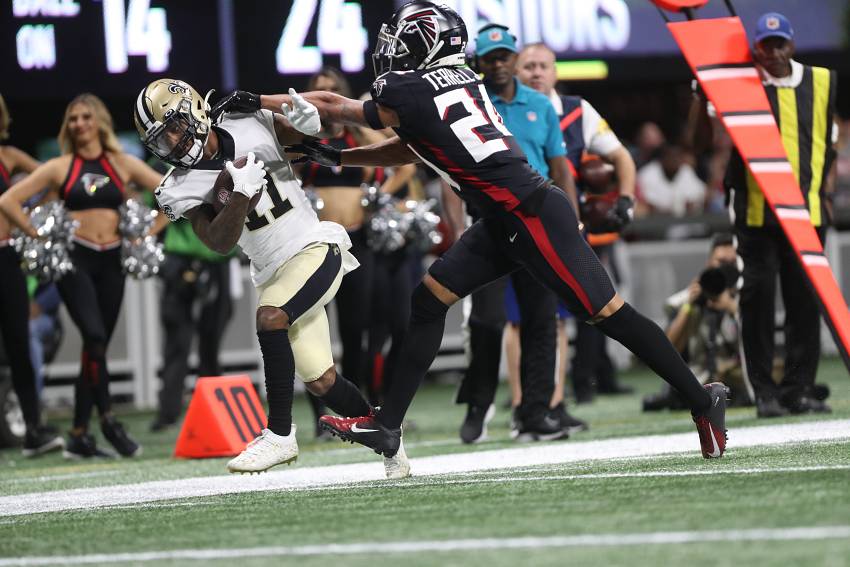 The New Orleans Saints open the season with their biggest rival this Sunday at Mercedes-Benz Stadium in Atlanta against the Falcons.

Under Sean Payton, the Saints dominated the Falcons for the most part. New Orleans was 22-10 against Atlanta during the time Payton was here from 2006-2021.

The two teams split last season, with each team winning on the opponent’s home turf.

In the all-time series, Atlanta holds a narrow 54-52 edge over the Saints, including a 27-26 edge in games played in Atlanta.

The last time the rivals met to start a season was in 2014, when the Falcons won 37-34 in overtime at home.

New Orleans started very well, jumping out to a 13-0 second quarter lead and led 20-10 at halftime.

Matt Bryant decided it with a 52-yard field goal in overtime. The Saints were porous on defense, allowing 568 yards to Atlanta as Matt Ryan passed for 448 yards and three touchdowns. Mark Ingram ran for two scores for the Saints.

The lone victory in a season opener for the Saints over the Falcons came in 2013 with the Saints prevailing 23-17 at home.

Ryan and Drew Brees each had two touchdown passes and an interception. Brees connected on a touchdown pass each to Marques Colston and Jimmy Graham while Garrett Hartley booted three field goals.

The first season opener played between the two southern rivals was in 1970, the final year for Tom Fears as head coach of the Saints. Fears would only make it through six games before being dismissed.

Tom Dempsey gave the Saints a 3-0 lead in the first quarter with a 42-yard field goal and the lead held until the fourth quarter when the Falcons scored twice on a two-yard run by Sonny Campbell and a 17-yard pass from Bob Berry to Harmon Wages.

New Orleans native and former West Jefferson star Al Dodd had five catches for 85 yards for the Saints. Dodd would actually play his last two seasons in the league with the Falcons.

The 1973 season opened in ominous fashion for the Saints and new head coach John North as the Falcons blasted the Saints 62-7 at Tulane Stadium.

It was by far the worst performance by a New Orleans Saints team in franchise history.

The Falcons of Norm Van Brocklin bolted out to a 31-0 lead and never let up, rubbing it in on its bitter rival as they were running up the score in the fourth quarter, kicking a field goal to go up 48-7 and throwing a touchdown pass to take a 55-7 lead.

It was the most forgettable day for Archie Manning as a professional as well as he suffered five interceptions and was just 5 of 13 for 62 yards with a touchdown.

The 1979 season opened in the Superdome with Atlanta taking a 40-34 overtime win over the Saints.

It was perhaps the most bitter loss the Saints have ever suffered to its biggest rival.

In a shootout, the game went back and forth, though New Orleans twice held an 11-point lead and could not hold it.

The game ended in overtime on a botched snap on a punt by John Watson, well over the head of Russell Erxleben, who chased it down as he was going into his own end zone. In desperation, Erxleben made a lame attempt at a shovel pass which settled delicately into the waiting arms of James Mayberry for a game-ending pick-six.

In 1981, the Bum Phillips regime began with a 27-0 loss at Atlanta as Steve Bartkowski tossed three touchdown passes and the Saints offense got nothing going.

New Orleans opened the 1984 season at home against the Falcons and Atlanta won 36-28.

The Saints led 21-19 at halftime but could not stop Atlanta in the second half. Gerald Riggs rushed 35 times for 202 yards and two touchdowns in a dominant performance for Atlanta.

In 1986, Jim Mora’s debut was against the Falcons and Atlanta won 21-10 in the Superdome. The Saints appeared leg-weary from a brutal training camp in Hammond. New Orleans would start the season 0-4 before rallying to finish 7-9.

The Falcons amassed 442 yards to just 176 for the Saints as Bobby Hebert suffered a pair of interceptions.

The trend is certainly an ominous one.

North, Phillips and Mora all lost their first games as head coach of the Saints to the Falcons.

Perhaps it is time to end the trend.