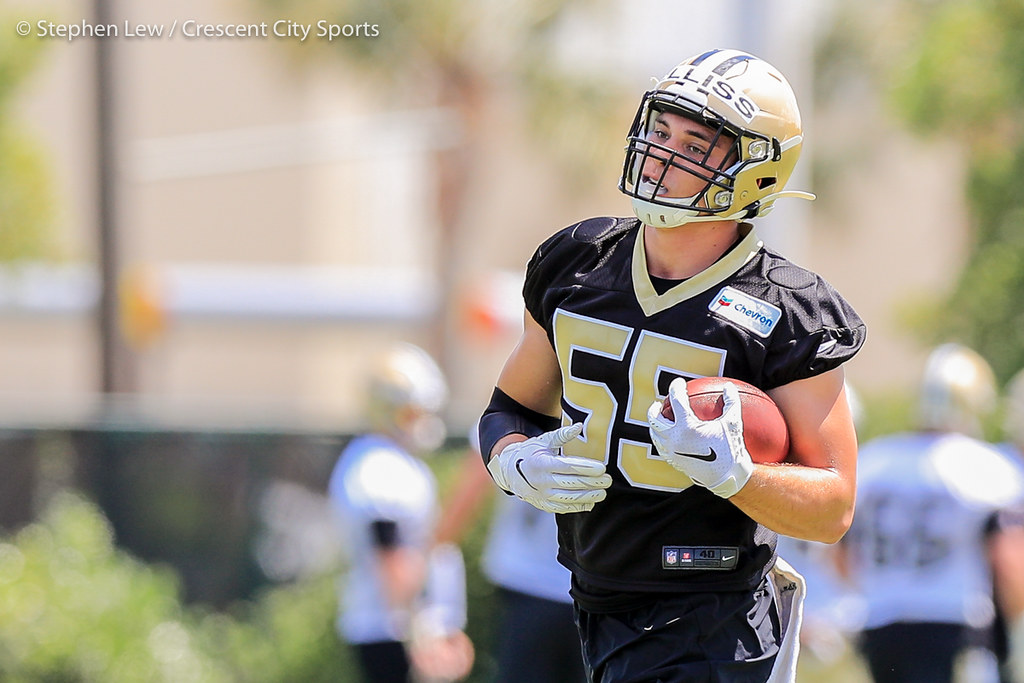 Already having experienced rookie minicamp with the New Orleans Saints a couple of weeks ago, seventh round pick Kaden Elliss is prepared to step up his game as he works with the veterans at Organized Team Activities.

The 244th overall pick in the recent draft was introduced to both the rigors and camaraderie side of the NFL at an early age. His dad Luther was a first round pick of the Detroit Lions in 1996 and went onto record 331 tackles with 39 sacks in 119 starts as a NFL defensive end. He was twice selected to the Pro Bowl.

Stars of the past in Detroit like Barry Sanders, Herman Moore, Robert Porcher were used to seeing little Kaden tag along with dad to the Lions’ practices.

“It was great getting to be around all of those players,” Kaden recalled fondly.

As a 195-pound option quarterback in high school, Kaden Elliss attracted limited interests from college recruiters and eventually decided on playing for the University of Idaho to continue his education and football.

The Vandals staff recognized his diverse athletic skills and offered him an opportunity to see the field in an assortment of ways. Elliss spent time at running back, tight end, slot receiver, every spot along the defensive line including nose tackle and all four linebacker spots. He posted 288 career stops in 47 games played with 17 sacks and 31 of his 47 tackles for loss coming during his final two seasons.

Needless to say, Elliss is ready to play wherever the Saints need him.

“If special teams is an opportunity, it’s all about however I can fit in here. I’m playing linebacker right now. Everyone here is dominant. There are high expectations. The coaches (at Idaho) prepared me on my road to get here. I played all four years in college (but) this is a higher level.”

Elliss was not invited to the annual NFL Combine in Indianapolis, but he posted impressive numbers that would have stood out at the event during Pro Day testing. Numbers like a 4.59 forty, 34.5″ vertical and 11’1″ standing long jump are impressive for a projected linebacker.

With a skill set that’s hard to miss, Elliss has already grabbed the attention of Saints head coach Sean Payton, who places a high premium on football IQ as well as physical talents.

“Number one, he picks things up extremely well,” Payton said. “I think he’s a good tackler. I think he’s a guy that has a chance to make it in the kicking game. If you start with some of those traits, that is the first thing that stands out. His vision and our vision for him in the kicking game and playing on special teams and then going from there. He has picked things up very well.”

With his father’s NFL background, Elliss is no stranger to what he has seen at Saints headquarters, but he was impressed with the visuals.

“I see pictures of Archie Manning and Drew Brees everywhere. I can see what they mean to the city and the organization.”

Well-grounded and strong in faith, Elliss is also confident in his abilities and desire to get the most out of them.

“I feel like I have a good work ethic. Everyone in my family has pushed me,” Elliss explained. “I’m always ready for practice. Faith leads me. The Lord has been good to me.”

Keep your eye on jersey No. 55 in Black and Gold. He’s the type of player that has not only made the squad as a long shot in the past but grabbed the heart strings of the Saints’ faithful along the way. Oh, and Kaden Elliss can really play.