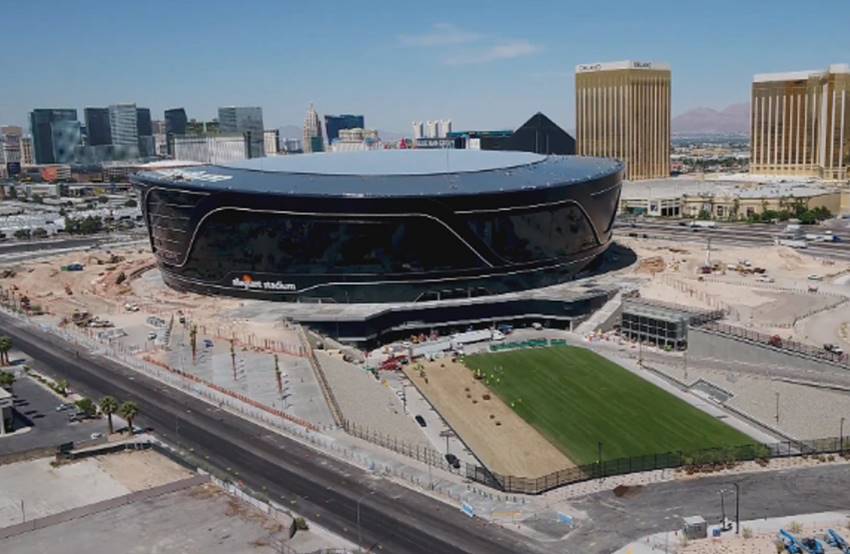 • ABC to Simulcast ESPN’s Presentation; ESPN2 Airs a Special Telecast with an Array of Guests; ESPN Deportes with Spanish-Language Presentation

ESPN will present a Monday Night Football MegaCast (Monday, Sept. 21, 8:15 p.m. ET) to celebrate the NFL in Las Vegas, utilizing multiple networks to showcase the Raiders’ first game in their new city, hosting the New Orleans Saints, and the debut of Allegiant Stadium. ESPN airs the traditional telecast which will be simulcast on ABC, and ESPN Deportes will have the Spanish-language presentation of the game. In addition, ESPN2 airs a distinctly different presentation featuring free-flowing conversation with stars from the NFL, and across the sport, entertainment, and music industries.
The Monday Night Football MegaCast presentation comes on MNF’s 50th birthday. The New York Jets and Cleveland Browns played in the inaugural MNF game on September 21, 1970, and televised on ABC. The NFL’s debut in Vegas also comes just four days after the NFL’s 100th birthday on September 17.

Steve Levy, Brian Griese, Louis Riddick, Lisa Salters and John Parry will have the call on ESPN and ABC, the first nationally televised MNF game on the broadcast network since 2005. Raider great Tim Brown voices a tease about the famed Raider Nation and the team’s move to Las Vegas to open the telecast. Throughout the game, aspects of Allegiant Stadium will be showcased. Gene Upshaw and Art Shell, both Raider legends, will be this week’s NFL Trailblazers, a weekly spotlight on a person of color who had a significant impact on the game.

ESPN’s Riddick is a former Raider, having played for the current Raiders coach Jon Gruden in 1998.

The MegaCast presentation on ESPN2 will feature Rece Davis, from ESPN’s studios in Bristol, Ct., and Kirk Herbstreit, from his home in Nashville, Tenn., in a virtual atmosphere. The duo will host a free-flowing conversation with various guests, from a wide spectrum of backgrounds, who will drop in and out throughout the game. The viewer experience will be multi-boxed, with the game, Davis, Herbstreit and guests appearing on the screen while conversation surrounding the game will serve as the audio. NFL dignitaries, current and former players, famous Raiders fans, celebrities, musicians and more are expected to drop in throughout the night. The presentation will touch on a variety of topics, including those on and off the field, and will include interactive fan polling to add to the virtual event.

• The Killers perform at halftime from the Caesars Palace rooftop, which will be shown on ABC, ESPN and ESPN2

• Monday Night Countdown (6-8 p.m.) includes former Raider Randy Moss as an analyst. Among the show’s highlights, Michelle Beisner-Buck’s feature on three Raiders families, from three different locations, who found a way to make themselves a part of the Raiders’ new home and help the community