It was a tilting of the see-saw game.

A pair of 2-2 teams squared off on a gray day in the suburban area of the nation’s capitol.

Things looked gray for a while for the visiting New Orleans Saints.

Then, things looked black and gold as New Orleans fought through adversity to pick up a needed win in a game that could swing the momentum of a season possibly heading toward mediocrity into one with promise.

For quite some time, the Saints reflected the up-and-down, inconsistent .500 team they were entering the game.

Then, the team found itself, making big plays that had to be made in all three phases of the game, including a wing-and-a-prayer being answered to end the first half.

It was an important victory.

Here are some Quick Takes from the 33-22 victory over the Washington Football Team:

**The Saints came out throwing against a poor Washington pass defense. It did not work.

**Then, Winston badly underthrew Taysom Hill and, for that matter, threw it well behind him and right into the arms of Cole Holcumb for an interception, which he returned to the New Orleans 31-yard line.

One thing Cole told us, he said…
…what did he say?….
…he just told us to be prepared

**Fortunately, Taylor Heinicke missed a wide open receiver on third down and Dustin Hopkins came on to kick a 45-yard field goal to make it 3-0 with 12:27 to play in the opening quarter.

**Winston responded in outstanding fashion, shaking off the pick and hitting a wide open Deonte Harris on a fly pattern for a 75-yard touchdown to make it 7-3 with 11:13 to play in the opening quarter.

**On the play, there appeared to be confusion between Bobby McClain and Landon Collins. It was the longest play of Harris’ young career.

**Washington responded with a 72-yard drive in 12 plays which stalled at the New Orleans 5-yard line as Marshon Lattimore broke up a Taylor Heinicke pass in the end zone. That forced a 28-yard field goal by Hopkins to cut the lead to 7-6 with 4:55 to play in the opening quarter.

**Winston then committed his second turnover on the next possession. On a pass attempt, he held the ball quite long, was sacked by Chase Young, fumbled and Payne recovered.

**The defense then got a big stop but Carl Granderson roughed the punter, giving Washington new life a the New Orleans 34-yard line.

**Washington had the ball for 10:37 in the first quarter.

**Washington took total advantage of the mistake by Granderson, driving 44 yards in seven plays, taking 4:11 off the clock with Antonio Gibson scoring on a 5-yard touchdown run to give the home team a 13-7 lead with 14:16 to play in the first half.

**The Saints lost a big weapon when Austin Jackson III committed a personal foul on Taysom Hill on a deep pass attempt by Winston. Jackson hit Hill in the head, knocking him out of the game with likely concussion-symptoms. Hill was carted off the field.

**New Orleans finished off a nice 75-yard drive in six plays with Alvin Kamara racing 23 yards, straight up the middle, for a touchdown. On the play, James Hurst had a very nice seal block.

AK makes it look so smooth into the endzone for the #Saints TD!#WFTvsNO | 📺: FOX pic.twitter.com/AtiqVhnZUF

**Unfortunately, Cody Parkey, making his debut with the Saints, missed the extra point wide right leaving the game tied 13-13 with 10:58 to play in the first half.

**Then, Harris, the other big threat on offense, tweaked a hamstring.

**Washington reached the New Orleans 16-yard line but Paulson Adebo came up with huge play, intercepting Heinicke at the 2-yard line. It was a man coverage, jump ball and Adebo won the battle with Curtis Samuel.

Adebo with the HUGE pick at the goalline Fleur-de-lis#NOvsWAS | Television: CBS pic.twitter.com/OEjNxERWAW

**The interception by Adebo snapped a streak of six straight possessions with either a touchdown or a field goal by New Orleans opponents, dating to the previous game with the Giants.

**Dwayne Washington went down hurt on a punt midway through the second quarter.

**Blake Gillikin delivered a massive punt of 60 yards which went out of bounds at the Washington 1-yard line with 1:53 to play in the first half.

**That gave the Saints a chance and they would take full advantage. After Washington went 3-and-out and punted, Kamara returned the punt to the Washington 48-yard line with eight seconds left.

**Rather than looking to throw a quick out-route, Winston and Sean Payton elected to go the Hail Mary route and the prayer was answered with the fullness of grace as Marquez Callaway positioned himself well, sealed off a defender and the ball was positioned very well by Winston with Callaway catching it for a 48-yard touchdown on the final play of the half to give the Saints a 20-13 lead.

Winston launches a hail mary to Callaway for a 49-yd TD at the end of the half – WOW! #WASvsNO | 📺: CBS pic.twitter.com/IR7AttiRpT

**In an uneven first half, Winston finished 8-of-16 for 189 yards with two touchdowns and an interception.

**Winston made a perfect throw on a deep ball to Kamara, who dropped it.

**Washington drove 69 yards in 14 plays, taking 7:20 off the clock with Hopkins kicking a 24-yard field goal to make it 20-16 with 1:53 to play in the third quarter. It was a classic case of the defense bending but not breaking.

**Andrus Peat went down late in the third quarter and Will Clapp replaced him at left guard.

**Gillikin then came through huge again, punting 53 yards and it was downed at the Washington 2-yard line.

**PJ Williams then came up with the big play, picking off a Heinicke pass at the Washington 26-yard line.

**Four plays later, Winston connected with a wide-open Callaway on a 12-yard touchdown pass to give the Saints breathing room with a 27-16 lead with 12:12 to play in the game.

**On the play, Callaway, in the slot, simply went outside, off the back of two other New Orleans receivers and the defensive back chose not to go under and got caught in the wash and it was as easy a completion as you could possibly hope for.

**Washington answered with a 75-yard drive in eight plays to pull closer, scoring on a 1-yard run by Antonio Gibson to make it 27-22 with 7:51 to play in the game. The pass attempt for a 2-point conversion was batted down by Shy Tuttle.

**It was time for the offense to step up and it did with an assist to the brilliant play-calling of Sean Payton.

**The Saints were faced with fourth-and-less than a yard at their own 34-yard line. Payton called timeout and elected to go for it. Winston snuck it between the left guard and tackle slot for a first down with a good down-block by Peat, who returned to action.

**Then, Payton fooled Washington with a play-action pass and Winston hit a wide- open Adam Trautman for 32 yards to the Washington 32-yard line.

**After Kamara ran for 11 and two yards, Payton dialed up a pass to Kamara and Winston hit him on a 19-yard touchdown pass to make it 33-22. Once again, Parkey missed the extra point.

While it was an uneven offensive performance and a bit uneven for Winston, all is well that ended well.

Winston overcame the two early turnovers to complete 15-of-30 passes for 239 yards and four touchdowns.

Kamara was his usual self, rushing 16 times for 71 yards and a score and catching five passes for 51 yards and another touchdown. Kamara also stepped in for Harris and returned three punts for 29 yards. Kamara was superb, other than the dropped pass.

It was great to see Trautman finally contribute after a rough, make that very rough start to the season.

Callaway came through in huge fashion with four catches for 85 yards and two touchdowns.

Lattimore was tremendous, as he broke up six passes.

The defense came up with two big turnovers, sorely needed.

The move to allow legendary punter Thomas Morstead to leave is being vindicated.

Gillikin was tremendous, averaging 53.6 yards on five punts, including efforts of 60, 57 and 53 yards which were downed at the 1,2 and 3-yard lines, respectively. If Gillikin is not the NFL Special Teams Player of the Week, there should be an investigation.

There is a huge difference between being 3-2 and being 2-3, particularly going into a bye week.

With the injuries to Hill, Harris and Washington, added to the absence of Kwon Alexander, David Onyemata, Marcus Davenport, Michael Thomas, Erik McCoy, Terron Armstead, Tre’Quan Smith and Tony Jones, the start is respectable but it could have been outstanding had New Orleans not blown an 11-point fourth quarter lead at home to a poor New York Giants squad.

Still, considering the obstacles, including the massive first half mistakes and injuries, the win Sunday was a big one.

There is a real chance that New Orleans will get many of those injured players back with a week off before heading to Seattle on Oct. 25.

After that game, Onyemata will return.

The Saints will get healthier and should get better as the growth process continues. 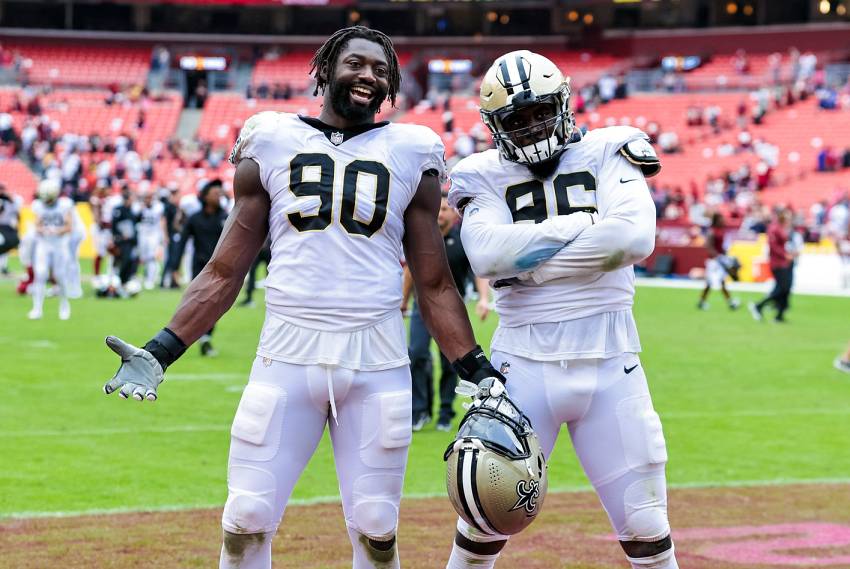 New Orleans went back and forth with a fellow inconsistent team but they won at Washington to improve to 3-2. Considering all the circumstances, that's just fine for now.