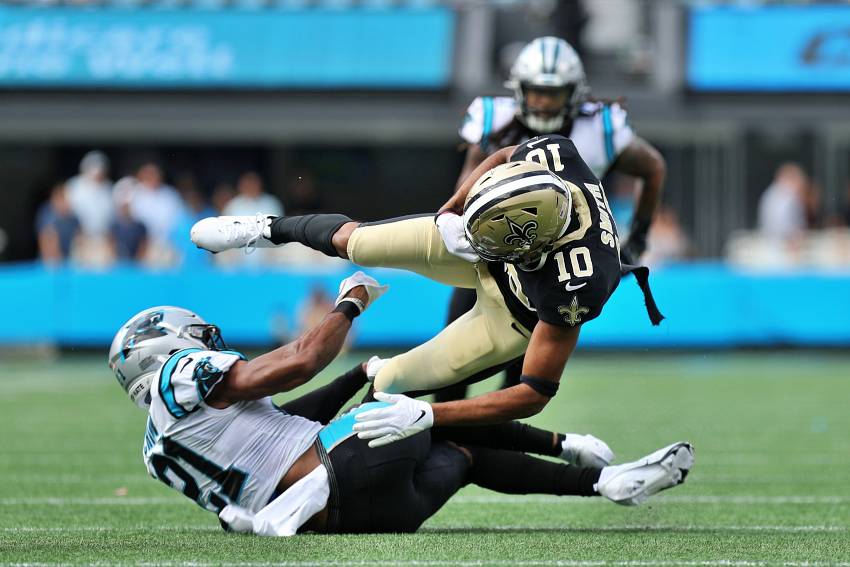 It was painful to watch if you are a New Orleans Saints fan.

Losing a fumble returned for a touchdown, two penalties nullifying first down gains, false starts, wide receivers lining up offside. Your best offensive player fumbles it away for a touchdown and drops a pass.

You have a field goal blocked, miss another field goal and commit three turnovers while forcing none. You can add seven more penalties to that deadly mix.

The recipe for failure was clear as day.

There was no way the New Orleans Saints were going to win on this day.

The kicking game was awful, other than the punting of Blake Gillikin.

The offense was bad until the fourth quarter.

When the offense finally got something done, the defense failed.

It was that kind of day.

Here are my Quick Takes on the 22-14 win for Carolina over the Saints:

**The Saints were without some key players, including Taysom Hill, Marcus Maye, Deonte Harty, Tony Jones Jr., lineman Wyatt Davis and cornerback Alontae Taylor, who was placed on injured reserve with a knee injury.

**Jameis Winston admitted to the Fox Network prior to the game that he is dealing with pain. He wore four extra layers of padding on his back in dealing with the fractures.

**The Saints allowed a first down but got a stop on the first series of the game.

**Jarvis Landry was back to field punts with Harty out.

**Winston fumbled the first snap from center, picked it up and ran for five yards.

**On the second play, Kamara ran left for 27 yards and a first down. Tre’Quan Smith had a good block on the play.

**The drive stalled due to two penalties, the first on Adam Trautman for a false start and the second on an illegal chop block on Mark Ingram which killed the Saints as Winston had completed a first down pass to Michael Thomas on the play.

**Carolina has now not allowed a touchdown on the opening series of a game by an opponent for 20 straight games.

**Kamara then committed a huge mistake, fumbling when Frankie Luvu stripped him on a run play and Marquis Haynes recovered and returned it 44 yards for a score to give Carolina a 7-0 lead with 5:32 to play in the first quarter.

**With a catch for nine yards in the first quarter, Jarvis Landry recorded his 700th career reception which tied him for 55th all-time in NFL history with Joey Galloway.

**Dwayne Washington was deep to receive kickoffs with Harty out and he promptly fumbled the first one he fielded. Fortunately, he recovered. Washington later made a poor decision to return a kickoff from five yards deep in the end zone and only reached the 19-yard line. Washington then had a poor return on the second half kickoff and lost the ball when he hit the ground but he was ruled down.

**Erik McCoy killed the next Saints possession. Ingram ran for a first down but it was negated by a holding call on McCoy and the Saints had to punt. McCoy would have another holding call later in the game.

**The New Orleans defense got a stop when Carl Granderson and J.T. Gray combined on a sack of Baker Mayfield early in the second quarter. It was just the second sack of the season for the Saints.

**Winston finally connected on a deep ball of 49 yards to Chris Olave to the Carolina 18-yard line but the Saints failed again.

**On third down, Winston threw to the end zone for Landry, who went inside. The throw went outside. It was not even close.

**Then, Wil Lutz had a chip-shot, 30-yard field goal blocked by Cade Mays, who came straight up the middle, though the kick appeared to be a little low.

Henry Anderson came through with the BLOCK 💪 pic.twitter.com/8TI7I5OsU7

**The six first down possessions for the Saints resulted in a punt, a fumble, three more punts and a blocked field goal as futility defined the offense.

**The Saints have now been shut out in the first half four times in 20 games since Drew Brees retired in the 2020 season. They were shut out four times in 228 games with Brees as the starter from 2006-2020, per @NFLResearch.

**Landry made a superb catch on a poorly thrown ball on the first series of the third quarter and appeared to twist his ankle and limped off the field. He would not return.

**Andrus Peat left the game with a concussion as well, replaced by Calvin Throckmorton.

**The Saints had a nice drive which reached the Carolina 18-yard line on a 22-yard completion from Winston to Tre’Quan Smith, the latter’s first catch of the season.

**Then, Winston, under pressure, missed an open Kamara for a touchdown, overthrowing him.

**Then, Winston was sacked by Jeremy Chinn.

**New Orleans finally got it going late in the third quarter and into the start of the fourth quarter by going with tempo and a no-huddle attack.

**On the drive, Winston missed his first pass before completing seven straight passes for 85 yards.

**The momentum did not last, not at all.

**Two plays later, Mayfield threw a flat pass to Laviska Shenault Jr. Covered by P.J. Williams in space, he made Williams miss, made Tyrann Mathieu miss and raced 67 yards for a touchdown to make it 19-7 with 12:06 to play in the game. Carolina went for a two-point conversion and failed.

**It was the second straight week that Williams has given up a touchdown in coverage.

**Michael Thomas later left injured as well and he would not return.

**Then, Jaycee Horn tipped a Winston pass on a blitz and Derrick Brown intercepted it at the New Orleans 35-yard line.

**New Orleans put together a quick-strike 90 yard drive in three plays, taking just 1:06 off the clock with Marquez Callaway making a brilliant, one-hand catch for a four-yard touchdown to cut the deficit to 22-14 with 2:22 to play in the game.

This TD catch from @CallawayMarquez was nasty. 🤧

**For Callaway, who was the leading receiver on the team in 2021, it was his first catch of the season.

**On the drive, Winston completed passes of 37 yards to Olave and 48 yards to Smith, who injured his shoulder on the play.

**New Orleans was out of timeouts, tried an onside kick which failed, Carolina kept the ball before punting and Johnny Hekker punted to the New Orleans one-yard line with 17 seconds left in the game.

**Horn, who intercepted Winston last season, picked off Winston again on a desperation deep throw to clinch the victory. Those are the only two interceptions by Horn, the son of Saints Hall of Fame inductee Joe Horn, for his young career.

Jaycee with the hops.

DB with the hands. pic.twitter.com/qNndrP8Z0C

This game was eerily reminiscent of last year’s game at Charlotte.

Week three of the 2022 season was a virtual instant replay, for the most part.

The numbers do not tell the story.

Winston completed 25 of 41 passes for 353 yards with a touchdown and two interceptions but was ineffective until the fourth quarter again.

Olave was the star with nine catches for 147 yards. Smith had four catches for 145 yards. Pete Werner was good again defensively, leading the team with 10 tackles.

Now comes a long trip to London to face the Minnesota Vikings, another struggling team in a matchup of 1-2 teams in need of a win.

Through three games, the 2022 New Orleans Saints are not a good team. In fact, they are fortunate, perhaps very fortunate to have a victory, having virtually stolen a win at Atlanta.

That has to change and change quickly if the 2022 season is to be a successful one.