Saints could use guys like their latest Hall of Fame inductees 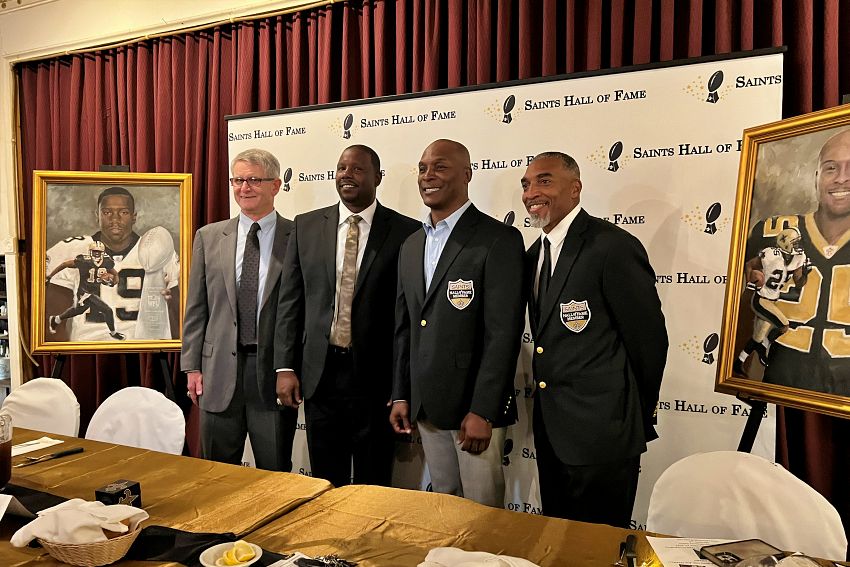 METAIRIE – The New Orleans Saints could use a couple of guys like Devery Henderson and Fred McAfee right now.

The Saints Hall of Fame and Alumni Weekend kicked off Friday afternoon with the induction of Henderson and McAfee as well as the presentation of the Joe Gemelli Fleur-de-lis Award to long-time trainer Kevin Mangum.

The three days of festivities will conclude Sunday when Henderson and McAfee are honored during the Saints game against the Las Vegas Raiders in the Caesars Superdome.

The 2-5 Saints could use a wide receiver like Henderson with Michael Thomas and Jarvis Landry sidelined by injury, and they could use a leader like McAfee as they search for team-wide answers after losing four of five games.

Henderson, a native of Opelousas, Louisiana who played at LSU and was drafted by the Saints in the second round of the 2004 NFL Draft, remains the franchise’s career leader in yards per reception (17.9). He caught seven passes in the Saints’ Super Bowl victory over the Colts at the end of the 2009 season and played nine seasons.

Former Saints wide receivers coach and ex-Tulane head coach Curtis Johnson was a presenter for a third time as he presented Henderson after having done so with Marques Colston and Lance Moore.

Johnson recalled being an assistant coach at Miami University in that program’s heyday when he received a tip about a speedy running back at Opelousas High in 1998. When Johnson went on a scouting visit, he encountered the 140-pound Henderson and knew he couldn’t bring the speedy but then tiny athlete into his elite program.

Four years later Johnson was watching on television when Henderson teamed with LSU quarterback Marcus Randle for “The Bluegrass Miracle,” a 74-yard touchdown pass as time expired and the Tigers escaped with a 33-30 victory at Kentucky.

Then-LSU coach Nick Saban had moved Henderson from running back to wide receiver before Henderson’s junior season and the speedster’s transition carried into the early days of his NFL career.

When Saints first-year coach Sean Payton hired Johnson in 2006, the assistant was reunited with Henderson and marveled at his perseverance as he was sometimes derided by fans for dropped balls as his late evolution into a wide receiver continued.

“He did everything I told him to,” Johnson said of Henderson.

“He taught me everything I needed to know about playing the wide receiver position,” Henderson said of Johnson.

Henderson also was at the center of one of the most memorable plays in Saints history – the “Superdome special,” a double reverse on which he took a hand-off from Reggie Bush and sprinted 11 yards for “the other touchdown” – not the one that came on Steve Gleason’s statue-inspiring blocked punt earlier in the first quarter – in the 23-3 victory over the Falcons in the post-Hurricane Katrina reopening of the Superdome in 2006.

McAfee was never in the spotlight for a play of the magnitude of the Superdome Special, but his contributions as a special teams star (including a first-team All-Pro selection in 2022) and effective running back in two stints in New Orleans (1991-93, 2001-06) led to his induction.

McAfee was nicknamed “Fast Freddie,” a moniker Lewis said McAfee claimed he earned by “chasing rabbits with a hammer” while growing up.

Fast Freddie read off a long list of Saints standouts that were teammates of his along the way, pointing out that he played with both Bobby Hebert and Drew Brees (“that’s crazy”) as well as Dalton Hilliard and Reggie Bush (“Wow!”).

McAfee said he was pondering whether to try and play a 17th season in the NFL or accept a front-office job offer from Payton as the 2007 football season was approaching.

He pulled into a gas station in Madison, Mississippi and ran into Saints general manager Mickey Loomis, who was on his way to Memphis.

McAfee took the improbable meeting as a sign that he should accept Payton’s offer.

“When are you retiring?” Loomis asked.

McAfee has worked with the Saints player development program since retiring and he’s in his second season as Vice President/Player Engagement.

Mangum is in his 42nd season as a trainer with the Saints, though his presenter, former head trainer and Gemelli recipient Dean Kleinschmidt, noted that the official timetable began when Mangum was hired as a full-time employee in the spring of 1981.

But Mangum’s contributions to the organization pre date that by several years as he routinely drove to New Orleans while in high school in Tylertown, Mississippi to serve a trainer internship and while a student at Southern Miss to help with the Saints pre-game preparation for home games.

Kleinschmidt wore his green blazer as a member of the National Athletic Trainers Association Hall of Fame, which chose him for induction on the first ballot after reviewing an in-depth presentation compiled by Mangum.

Mangum’s “dedication, trustworthiness, hard work, loyalty” and willingness to “go above and beyond what was in his game plan” as qualities that led to the selection of Mangum, who gave thanks for the opportunity to use his gifts to help in a “small way” to contribute to the “elite athletes of the New Orleans Saints.”

One of Mangum’s primary areas of responsibility has been to work with players on their rehabilitation from injuries large and small.

Kleinschmidt quoted from the movie “Patch Adams,” by saying “laughter is medicine” as he praised the quiet, understated Mangum for his use of humor on the job “when it was needed most.”

Presumably that’s a quality that has come in handy this season. 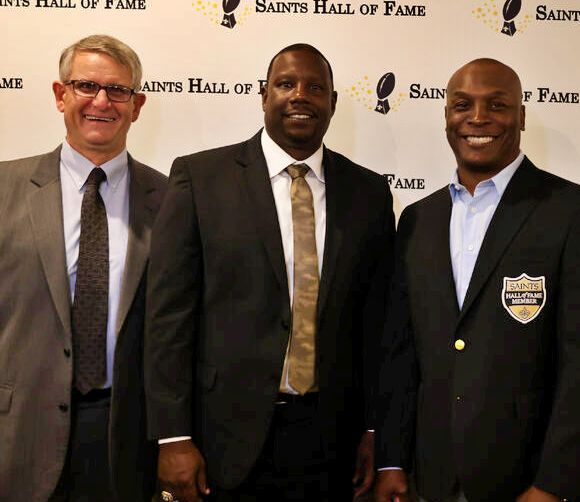