The New Orleans Saints went into their game at Philadelphia on Sunday with a clear list of priorities.

They knew they couldn’t allow the Eagles to run the ball as effectively as they did in a 24-21 victory against the Saints last season.

They knew they couldn’t turn the ball over more than they took it away because they had been minus-1 in turnovers in each of the last two weeks and lost both times.

They knew they couldn’t start poorly and play with a double-digit deficit for most of the game as they had in those two games.

And they knew it would help if they could periodically convert a point or two after their touchdowns, which is the NFL norm but hasn’t been theirs.

They basically did everything they knew they couldn’t afford to do – especially in the absence of a half dozen or so of their most important players, who are injured.

“Obviously we didn’t do the things necessary to win in our league,” head coach Sean Payton said, “pretty much in every phase.”

The Eagles rushed for 244 yards after rushing for 246 in the win last December.

“I’d be curious to know what the percentage is on teams that turn it over three times and win the ball game,” Siemian said. “I bet it’s pretty low. So that’s on me. I put our team in a hole early and it’s just too tough to dig yourself out of that.”

Brett Maher, brought in for a second time to try and stabilize the place-kicking, a week after Brian Johnson missed two extra points – leading to a pink slip even though he was eight for eight on field goals – missed (you guessed it) an extra point, though he did make two.

The Saints conversion issues are compounded by the fact that they have missed their last nine two-point attempts, including one Sunday and four in the last three weeks.

The absence of Wil Lutz has complicated the kicking equation.

The ongoing absence of Alvin Kamara and three-fifths of the starting offensive line as well as that of Jameis Winston and Michael Thomas, who aren’t coming back, limit the offense and the ability to avoid early deficits.

And the absence of C.J. Gardner-Johnson, Malcolm Roach, Tanoh Kpassagnon and Payton Turner, though not devastating, haven’t helped the defense.

“There were a lot of things we did today that weren’t injury-related,” Payton said.

Every team in the NFL has injuries this time of year. Some teams are more hampered than others. Some overcome the absences better than others.

The Saints have an inordinate number of injuries to key players right now. They also have a head coach who is uncommonly good at surveying the assets he has and his team’s opponent has in any given game and crafting a game plan that maximizes his team’s chances of success.

The injuries don’t excuse losses or poor execution. What they do is require that the players who are available – and the coaches – perform as close to their maximum potential as possible.

“The margin for error is so small,” Siemian said correctly.

And the Saints, who have lost three games in a row for the first time in five years, are erring more than they can afford to. 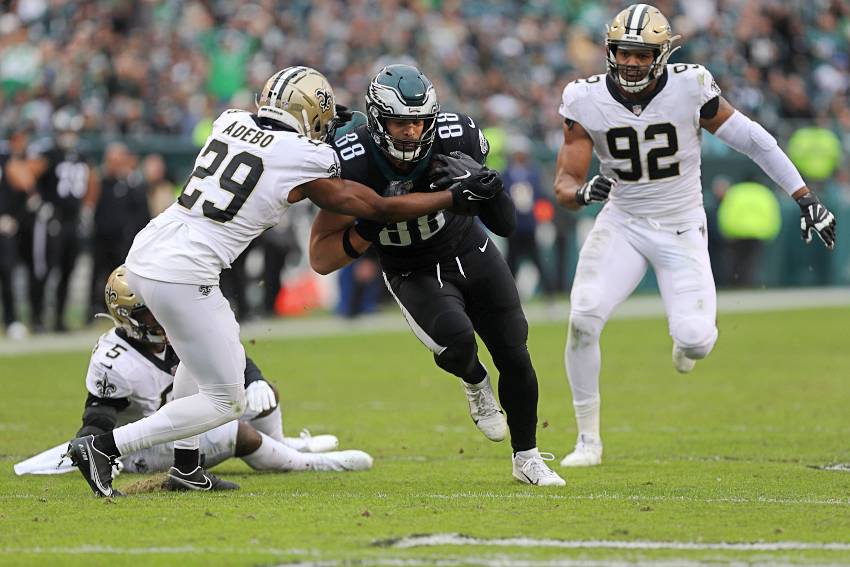 Saints beaten up front, plagued by turnovers in loss to Eagles

It was too much - make that way too much - to overcome Sunday afternoon in Philadelphia.