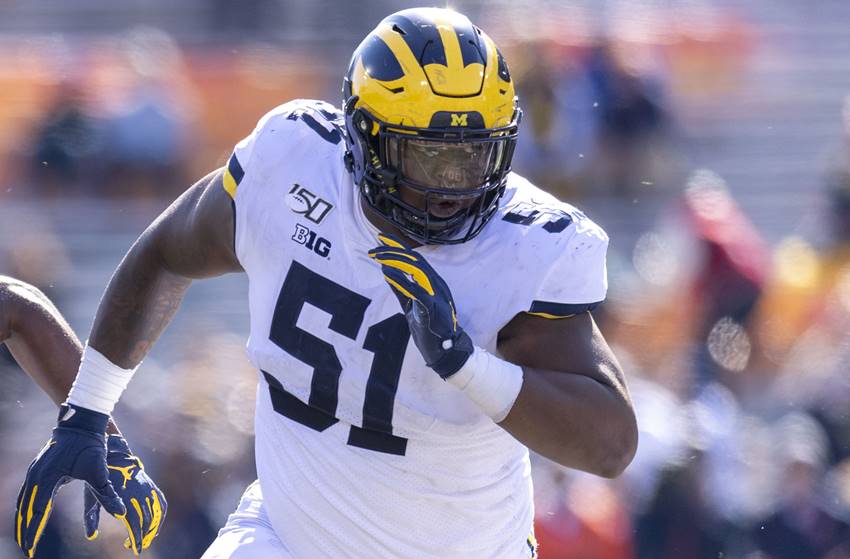 You can’t please everyone.

The pick of Cesar Ruiz by the New Orleans Saints in the first round of the 2020 NFL Draft did not excite the masses. That may be an understatement, based on some of the social media responses Thursday night.

With Patrick Queen and Kristian Fulton still on the board and with both having first round grades on many fronts, the table was set, particularly with needed improvement on the defensive side of the football.

Then, there were Grant Delpit and even Clyde Edwards-Helaire, although either may have been considered a bit of a stretch by many.

The Saints, who have chosen just two LSU players (Al Woods, Will Clapp) in the draft under Mickey Loomis and Sean Payton, chose not to go that route with their first 2020 pick.

Clearly, along with Jeff Ireland, the Saints went with the best player on their board in Cesar Ruiz.

A pair of players who went prior to the choice of Ruiz eliminated possible selections when the Vikings snagged Justin Jefferson at No. 22 before the Chargers traded up, jumping the Saints to choose linebacker Kenneth Murray.

Some had Ruiz with a late first round grade while others had him going early in the second round. He went 24th to New Orleans.

Incidentally, Queen went 28th overall to Baltimore, behind another linebacker of the same ilk, Jordyn Brooks, who went to Seattle.

For those who wanted Fulton, Noah Igbinoghene, another cornerback, went 30th to Miami. Igbinoghene comes from a very athletic family. His sister is a track star while his parents were both Olympians. Then, at No. 31, Minnesota went with cornerback Jeff Gladney of TCU ahead of Fulton as well.

Fulton did not get picked in the first round. Neither did Delpit.

Ironically, Edwards-Helaire, who was not a first round projection, did get selected with the final pick of the opening round by the world champion Kansas City Chiefs.

Ruiz started 31 games at Michigan. He is a high character young man who lost his father when he was 8.

Ruiz is considered the top interior lineman in the draft. If you view Ruiz as a center, it is puzzling, with the presence of Erik McCoy. If you view him as a guard, it makes sense, with Larry Warford entering the final year of his contract and after not grading out that well last season. If you plan on moving McCoy to guard, it makes even more sense.

Ruiz (6-3, 307) started at right guard as a freshman before moving to center. He has stated that he is a natural center so we shall see what Sean Payton has in mind. Ruiz has good flexibility and he has played against good competition. Ruiz played in 36 games at Michigan, starting 31 straight.

One very revealing statistic on Ruiz from Michigan is that in those 36 games, he was never flagged for holding, not once, according to Sports Info Solutions.

From an organizational perspective, the Saints went with what has been a winning philosophy, building from the inside-out.

Defensively, Cam Jordan, Sheldon Rankins and Marcus Davenport were all first round picks and Trey Hendrickson was a third round choice. David Onyemata arrived via the fourth round.

The goal is winning.

The Saints are not adverse to LSU players or to any players from any school. Common sense tells you that you go with the best players if you want to win.

The recent decision making of the Saints in the draft has been among the best in the NFL. That is why the team has enjoyed back-to-back 13-win seasons.

With that backdrop, they deserve the benefit of the doubt. Beauty is in the eye of the beholder. Time will tell.