A pair of teams that are contending in their respective conferences and who entered Sunday’s game at Nashville banged up and without key players hooked up.

Both teams entered the game as good rushing teams and good teams against the rush.

When you have a bad penalty call followed by mistakes of your own prior to halftime, you are not going to beat the top seed in the AFC on the road.

The two-minute sequence to conclude the first half decided the game.

So, too, did another critical penalty and the inexcusable miss of two extra points by a kicker who figures to have a short shelf life in the NFL.

Losing to the Giants and Falcons at home, as heavy favorites, were bad losses.

Losing to the top team in the AFC on the road when you were the better team, was even harder to accept.

All that matters is the end result and the New Orleans Saints were losers Sunday, despite a strong effort, considering you were without the entire left side of your offensive line (Andrus Peat, Terron Armstead), your starting quarterback (Jameis Winston), your best receiver (Michael Thomas), your best player (Alvin Kamara) and your kicker (Wil Lutz).

Perhaps the competition committee will address creating the opportunity to review plays such as the absurd roughing the passer (blow to the head) call which ultimately decided the game.

Here are my Quick Takes on the 23-21 loss at Tennessee:

**The Saints won the toss and deferred, giving Tennessee the ball first.

**The Saints had to open with Calvin Throckmorton at left guard in place of Peat and James Hurst at left tackle in place of Armstead.

**Ty Montgomery lined up at running back and got a carry for a first down on the opening series of the game. Then, he dropped a pass and injured his finger and left the game and did not return.

**Erik McCoy drew a hands to the face penalty on the second offensive series.

**Cesar Ruiz struggled mightily in the first quarter, allowing two sacks to kill the first two possessions for the Saints.

**Tennessee took the lead, driving 70 yards in eight plays, taking 3:08 off the clock with Randy Bullock kicking a 28-yard field goal to make it 3-0 with 52 seconds to play in the opening quarter.

**The big play of the drive was a 50-yard completion from Ryan Tannehill to Marcus Johnson, who lost Marshon Lattimore on a rub-route against man coverage. Lattimore had outside leverage and Johnson cut in, off of the slot receiver and Lattimore was partially picked, resulting in a long catch and run.

**New Orleans answered with an outstanding drive of 75 yards in six plays with Trevor Siemian hitting Tre’Quan Smith on an 11-yard touchdown pass to make it 6-3 with 12:59 to play in the half but Brian Johnson missed his second extra point of the season, the fourth missed extra point by New Orleans this season.

#Saints take the lead on a Siemian to Smith TD 🙌

**The big play of the drive was a 46-yard completion from Siemian to Deonte Harris on a beautiful catch and throw.

Mark Ingram wanted to make sure he kept the ball from the record-breaking run, tossed it to the sideline 🙌

**Tannehill was then intercepted by Marcus Williams in the end zone but Kaden Elliss was called for a personal foul for a blow to the head on Tannehill, negating the interception. It was a terrible call as Elliss did not hit Tannehill’s head. It was the first penalty against Elliss in his young career.

**Sean Payton called timeout to argue about the flag thrown by referee Barry Anderson but to no avail. It would have been nice to have that timeout on the final drive of the half for New Orleans.

**Then, Demario Davis was flagged, appropriately, for pass interference, giving the Titans the ball at the New Orleans 1-yard line.

**Tannehill snuck it in to give Tennessee a 13-6 lead with 1:38 to play in the half as the drive covered 56 yards in eight plays, taking 3:23 off the clock. It was a gift touchdown, to be certain, one that never should have happened.

**The Saints had a chance to answer before halftime as Siemian hit Harris for 21 yards to the Tennessee 35-yard line but inexplicably, Siemian held the ball too long on consecutive plays and took consecutive sacks. With no timeouts, taking the sacks were the last things he could have or should have done.

What a first down throw by Siemian to Harris

**It was a complete mental bust for Siemian. The one thing you simply cannot do is take a sack in that situation and he took two in a row and took the Saints out of field position and lost a ton of time.

**Deonte Harris was drilled by Dylan Cole and fumbled with Tory Carter recovering at the New Orleans 19-yard line.

**Tennessee took full advantage, going 19 yards in five lays with Tannehill hitting an uncovered MyCole Pruitt on a 2-yard touchdown pass to make it 20-6 with 12:02 to play in the third quarter.

Ingram's first TD with the #Saints this season ⚜️

**Ryan Ramczyk had an excellent block and the Tennessee defense was influenced by the jet-sweep action of Harris coming one way, as he had two plays previously. Ingram went the other way and scored. It was a good scheme and good execution.

**Tennessee got some cushion on a 36-yard field goal by Bullock to extend the lead to 23-12 with 10:01 to play in the game, driving 55 yards in 11 plays, taking a critical 6:18 off the clock as the Saints defense could not get off the field.

**The big play was a 39-yard screen pass from Tannehill to D’Onta Foreman to set up the score.

**Siemian hit Mark Ingram with a beautiful touch pass for 34 yards to the Tennessee 34-yard line.

**Then, Siemian hit Johnson for 26 yards to the 3-yard line.

**New Orleans reached the 1-yard line but could not get it in.

**Payton is known for being uber-aggressive but he was not, on this occasion.

**The thought was that at the 1-yard line, you had two plays to make a yard. That was not what the Saints were thinking. On third down, a pass was called and Siemian threw incomplete to Smith in the back of the end zone.

**The Saints got a stop and then got a big drive, going 71 yards in seven plays with Siemian hitting Marquez Callaway on a 15-yard touchdown pass to cut the deficit to 23-21 with 1:16 to play in the game.

**New Orleans had to go for two. Taysom Hill was inserted at quarterback with a power formation with three tight ends and a fullback.

**Unfortunately, Trautman struck again with another critical mistake in a season full of his mistakes as committed a senseless false start penalty.

**That moved the ball back to the 8-yard line and Siemian was re-inserted at quarterback, needing to throw.

**Siemian tried to loft one to Ingram but it was incomplete and the Titans had a very fortunate victory.

By the way, the Saints have now failed on their last eight 2-point conversion attempts, dating to 2018. That is an astonishing statistic.

Once again, the Saints incurred too many penalties, incurring nine for 65 yards.
Ingram accounted for 108 yards from scrimmage as he became the all-time leader in franchise history in rushing.

Siemian played well, completing 19-of-34 passes (at least three drops, possibly four) for 298 yards and two touchdowns with no interceptions. The two sacks he took before the half were very poor decisions and may have cost the Saints points but then again, could you really count on Johnson to make a field goal of 45-55 yards when he cannot make an extra point?

The Saints have already gone through four kickers this season trying to replace the injured Wil Lutz. Number five is likely on the way.

Garrett Hartley is still living here and continues to poke around other leagues and to post kicking videos. At this point, could you do any worse? He made the biggest kicks in franchise history.

Marcus Davenport was a bright spot with two sacks.

On a day where Tampa Bay lost, the Saints blew a golden opportunity to jump to the top of the NFC South. 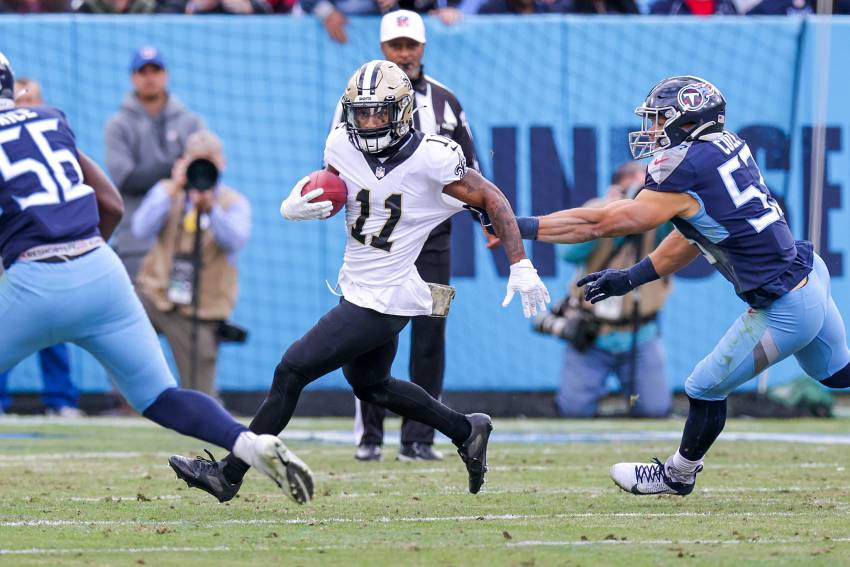 The New Orleans Saints had a lot going against them in their game Sunday.