Saints by the Numbers: Brees sets completions record, then uses his legs

On an afternoon that began with the foregone conclusion that Drew Brees would end the day as the NFL’s career leader in completions, Brees ended up doing so much more.

The future Hall of Famer took care of the completions record early on, passing Brett Favre with career completion No. 6,301 in the second quarter of the Saints’ 43-37 overtime victory in Atlanta.

It’s what happened late in regulation, and then in overtime, that put Brees in unique company on this day. 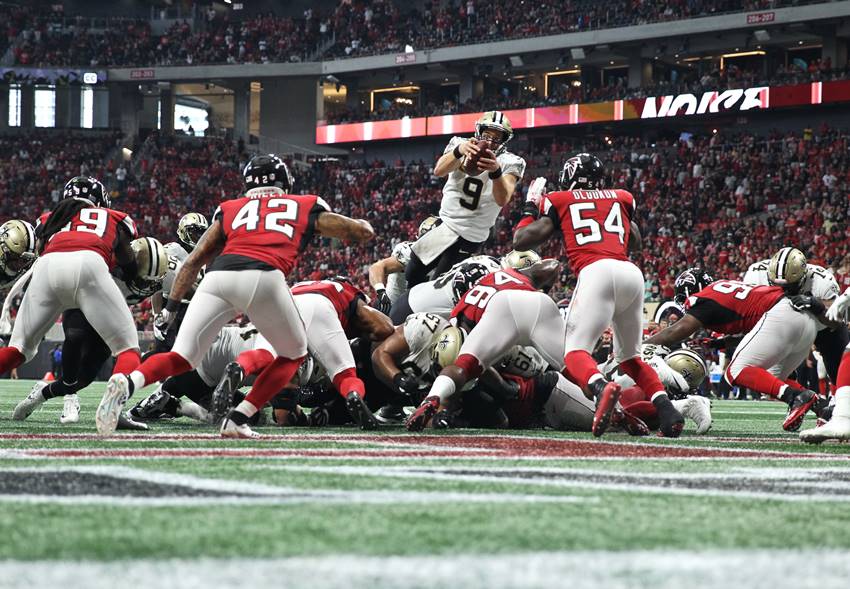 A game where passing attacks ruled came down to a coin toss.

Brees rushed 7 yards for the game-tying score with 1:15 remaining in the fourth quarter, then ended the game with a 1-yard quarterback sneak.

Add in his 395 passing yards, three touchdown passes and no interceptions, and he is the first quarterback in NFL history with such a stat line.

It was only the second time in Brees’ career he has rushed for two touchdowns in a game. The other was the Saints’ come-from-behind, 46-34 victory over the Miami Dolphins on Oct. 25, 2009.

Additionally, Thomas has had at least 10 catches in every game, putting him on the precipice of matching a performance by Calvin Johnson in his record-setting 2012 season.

Johnson is the only player in NFL history with double-digit receptions in four consecutive games. Thomas is one of six other players with a streak of three games of 10 or more catches. Keenan Allen of the Chargers had such a streak last season.

Kamara Catches: When the 2018 season began, Tony Galbreath had a 40-year old  franchise record  for receptions in a regular-season game with 14.

Three weeks into the season, Galbreath is now third on the list.

After Thomas broke the record in Week 1 with 16 catches, running back Alvin Kamara moved into second place on the single-game receptions list with 15 grabs for 124 yards Sunday.

Kamara now has 30 receptions through three games. Not only are Thomas and Kamara the first teammates to have 30 or more catches after three games, but they are only the seventh and eighth players in NFL history to reach the mark.

The list of players with at least 30 catches through the first three games:

It’s Been A Decade: Kamara finished with 66 yards rushing along with his 124 yards in receptions. The 190 yards from scrimmage is the most by a Saints player since the 2007 season finale at Chicago, when Pierre Thomas became the first and only player in franchise history to finish with 100 or more yards rushing and receiving.

It’s the 12th time in franchise history a player has reached the 190-yard mark. Deuce McAllister (three, in consecutive games in November 2003) and Dalton Hilliard (two) are the only players to top the mark more than once.

Interestingly, all have come early in a player’s career, when the player was 23, 24 or 25 years old. Just as interestingly, of those 12 performances, half have come against the Falcons.

Those 25 games of 500 or more yards are easily the most in the NFL in that span. By comparison, in the first 39 years of the Saints franchise, there were only seven 500-yard games.

39 is the Magic Number: Brees completed 39 of 49 passes for 396 yards and three touchdowns.

In addition to tying his franchise record for completions in a game, the 39-year-old Brees’ performance was the 39th time in NFL history a quarterback has completed 39 or more passes.

Opponents Airing It Out: The Falcons finished with 359 net passing yards Sunday – 374 by Matt Ryan minus 15 yards of sacks.

Through three games, the Saints have allowed 1,010 net yards in the air, becoming the 14th team in NFL history to exceed 1,000 passing yards allowed in the first three games of the season.