One of the most important positions which requires a multiple skill set is the tight end position.

In the 53-year history of the franchise, the New Orleans Saints had had both types of tight ends and a few who could handle both aspects quite well.

There were a pair of those who were outstanding receivers, a pair who were great blockers with good hands and another who still handles both disciplines in consistent fashion.

Graham came to football late, while he was at Miami (FL), after playing basketball as his main sport until then. 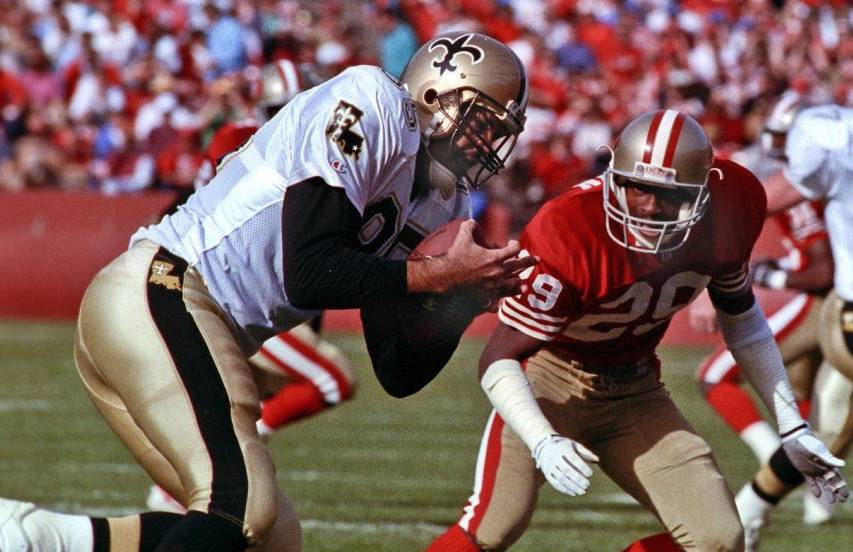 Hoby Brenner (1981-93) was another third-round pick of New Orleans that worked out wonderfully.

Brenner arrived in 1981 and established himself immediately, earning a starting position which he would not relinquish for 13 seasons as an amazingly consistent performer.

Brenner was a devastating blocker for Bum Phillips and Jim Mora, clearing the path for a punishing running game, featuring 1,000 yard rushers in George Rogers, Rueben Mayes and Dalton Hilliard, among others.

Brenner was also sure-handed, a very good receiver, despite not possessing speed. Brenner is tied for seventh all-time in franchise history with 175 games played and he started 157 games.

Brenner started all 16 games in six different seasons. He caught 267 passes for 3,869 yards and 21 touchdowns.

Brenner was part of the first four playoff teams in franchise history. He had five catches for 74 yards in the playoffs. Brenner made the Pro Bowl in 1987, when the Saints had their first-ever winning season and playoff appearance.

Brenner was inducted into the Saints Hall of Fame in 2001.

Childs was a superb receiver. He caught 207 passes for 3,224 yards and 27 touchdowns. Childs caught 50 or more passes in consecutive seasons in 1978 and 1979, when Archie Manning returned to the lineup healthy and when the Saints put together one of the best offenses in the NFL with the likes of Wes Chandler, Ike Harris, Tony Galbreath and Chuck Muncie.

In 1977, Childs caught nine touchdown passes, third most in the NFL, the sign of things to come.

In 1978, Childs caught 53 passes for 869 yards and four touchdowns and was named second team All-Pro by UPI.

In 1979, Childs made the Pro Bowl, catching 51 passes for 846 yards and five touchdowns. Childs was named first team All-Pro by Pro Football Weekly.

Childs was inducted into the Saints Hall of Fame in 1994.

Josh Hill has seemingly always been “the other guy” for the Saints at tight end.

Hill remains a constant stalwart for the Saints, having played seven seasons (2013-present) as he is set to enter his eighth season.

Hill has played in seven playoff games with 14 catches for 169 yards and 1 touchdown and he has been part of four playoff teams for the Saints.

Hill is a solid blocker at the point of attack and a dependable receiver as well. He will undoubtedly continue to add to his already impressive resume with a good team in 2020.

Like Hill, Tice was “the other guy” for the Saints at tight end but he was very good.

Tice played 10 seasons (1983-92) and was part of the turn-around for the franchise, part of the first four playoff teams in franchise history.

Tice was like having a third tackle for Bum Phillips and Jim Mora as he was huge (6-4, 242) and a terrific blocker at the point of attack but Tice, like Brenner, also had good hands.

Dave Parks was good in five years with the Saints with 149 catches for 2,254 yards and 16 touchdowns. Ben Watson was solid in four years in New Orleans with 148 catches for 1,587 yards and 12 touchdowns. Jeremy Shockey played just three years but had 139 catches for 1,460 yards and six touchdowns and he was part of the Super Bowl XLIV championship and caught what proved to be the game-winning touchdown pass in that contest.

Jared Cook could well make his mark if he continues on the path of his first season in New Orleans, when he caught 43 passes for 705 yards and nine touchdowns in 2019.