With the stay at home order issued Sunday, the cabin fever aspect of life has grown incrementally over the past 24 hours.

Do you feel the heat? Can you handle the slow burn?

In the hustle and bustle of everyday life, we flex out muscle in so many ways to prove that we can survive, drive ourselves and thrive.

We have time on our hands, it seems, perhaps too much time.

Tommy Shaw of Styx summarized the feeling of many of us, including several I have spoken with in the last few days, in the hit song “Too Much Time on My Hands.”

With too much time on my hands and a fan of Styx (though I would love to see the group reunite with Dennis DeYoung for one last ride), here is another piece of New Orleans Saints history to enjoy over the next couple of weeks.

Over the next 16 days, we will take a look at the top five players in New Orleans Saints history at each position on the field, combining the linebacker spot (inside and outside), along with kick return and punt return specialists.

Today, we start with the most important position on the field.

Drew Brees has set many NFL records and is well on his way to enhancing his already complete resume for the Pro Football Hall of Fame when he retires. Brees will easily earn Saints Hall of Fame honors and Saints Ring of Honor recognition when he finally retires.

Brees was brilliant in Super Bowl XLIV, earning Most Valuable Player honors as the Saints beat the favored Indianapolis Colts 31-17.

The Purdue product is still going strong at the age of 41. He set an NFL record for highest completion percentage in league history in 2018 and just missed eclipsing his own record in 2019.

When the Saints won the Super Bowl, Brees finished second in the NFL Most Valuable Player voting in 2009 to Peyton Manning of the Colts. He was also runner-up for the award in 2006 to former teammate LaDanian Tomlinson of the Chargers. Brees also finished second in 2011 behind Aaron Rodgers of the Packers and finished second to Patrick Mahomes of the Chiefs in 2018.

Brees is unquestionably a top 10 quarterback in NFL history, perhaps top five, and he has a chance to change that narrative in 2020 as the Saints figure to contend for a Super Bowl title.

Archie Manning was extremely gifted, talented, but was stuck with a slew of bad teams in a bad organization.

Manning led the NFL in passing yards in 1972. He also led the league in being sacked three times, taking a beating. He completed 55.4 percent of his passes with the Saints.

When finally given a good nucleus to work with in 1978, Manning was named the NFC Player of the Year. The presence of Wes Chandler, Henry Childs, Ike Harris, Tony Galbreath and Chuck Muncie, along with a solid offensive line made the Saints one of the most exciting teams in the NFL.

Unfortunately, the Flex defense of Dick Nolan flexed a bit too much and the Saints lost six games by a touchdown or less. They were close but not close enough. There were the two memorable excruciating 20-17 losses to Atlanta, one at Fulton County Stadium in which the Saints were robbed by a horrible call by Grover Klemmer.

Manning was a Pro Bowl player again in 1979 when the Saints had their first non-losing season ever. It easily could have been the first winning season ever and first playoff appearance ever.

Particularly hard to swallow were a 40-34 season opening loss to the Falcons in New Orleans and a 42-35 loss to the Oakland Raiders on Monday Night Football on Dec. 3 when the Saints led 35-14 in the third quarter.

Bobby Hebert was tough. He was a winner. He could easily be second on this list. 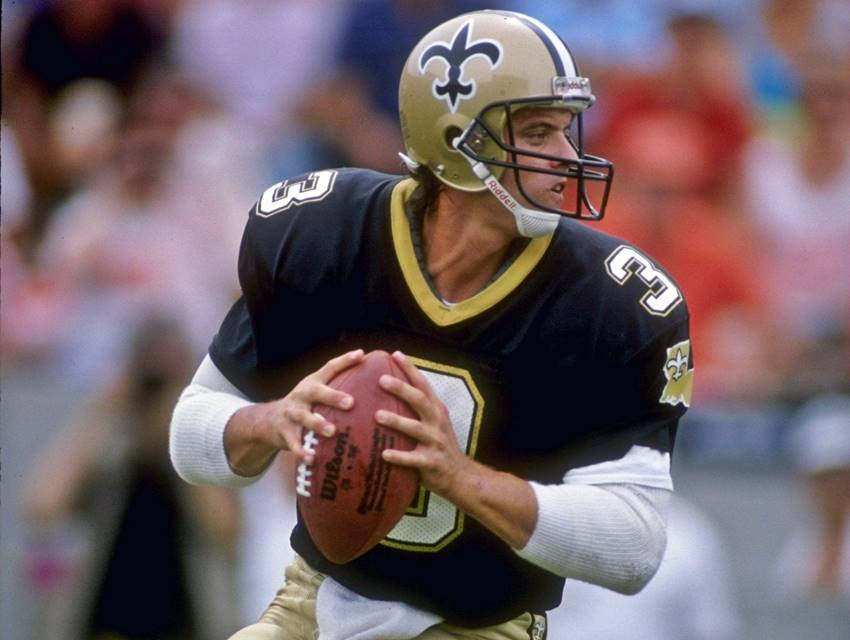 Posting a 49-26 record as a starter in New Orleans in his seven years at the helm, Hebert completed 58.5 percent of his passes with the Saints.

For Bobby, it was never about individual statistics. He did not have a big play receiver in his entire stint with the Saints.

Eric Martin was an outstanding receiver who was big, tough, fearless but lacked speed. The tight ends were great blockers with good hands who could not run. The running game was clearly featured with the likes of Reuben Mayes and Dalton Hilliard.

Hebert was inducted into the Saints Hall of Fame in 1999.

Aaron Brooks was brought to New Orleans as a backup quarterback to Jeff Blake.

Blake started 11 games in 2000 but broke his foot and, despite guiding the Saints to a 7-4 record, Blake never got his job back.

Brooks took over and gave the Saints new dimensions with his big arm and mobility.

The former University of Virginia star guided the Saints to a 3-2 record the rest of the way and then was brilliant as the Saints dethroned the defending Super Bowl champion St. Louis Rams 31-28 in the playoffs to give the Saints their first playoff win ever.

Brooks completed 56.4 percent of his passes with New Orleans.

Brooks was 38-44 as a starter with the Saints but that record was clearly skewed by the disastrous 2005 season when Hurricane Katrina rendered it virtually impossible for the Saints to have any success. Brooks went 3-10 as a starter before being benched and the Saints went 3-13 overall and Brooks moved on after the Saints changed regimes and Sean Payton brought in Brees.

His added dimension of being able to extend plays and run the ball well allowed Brooks to rush for 1,410 yards and 13 touchdowns with the Saints.

Brooks was inducted into the Saints Hall of Fame in 2014.

Bill Kilmer was a tough guy, a great leader.

The Saints were 11-28 in his four seasons but that does not tell the story of Kilmer. He completed 53 percent of his passes with the Saints.

Kilmer was fifth in the league in pass completions in 1969 with 193.

He was the unquestioned leader of the team and embraced the role in the early years. Kilmer took a beating. He helped make Danny Abramowicz the NFL leader in receptions with 73 in 1969 when Kilmer passed for 2,532 yards and 20 touchdowns. All 73 of the catches by Abramowicz came from Kilmer.

After departing for Washington after the 1970 season when the Saints drafted Manning, Kilmer proved how good he was with the Redskins by taking them to a Super Bowl.

Kilmer was inducted into the Saints Hall of Fame in 1990.

In franchise history, the only quarterbacks to start at least 16 games (equivalent of one season) to post winning records are Brees, Hebert and Walsh.

Next, we will take a look at the fullback position.