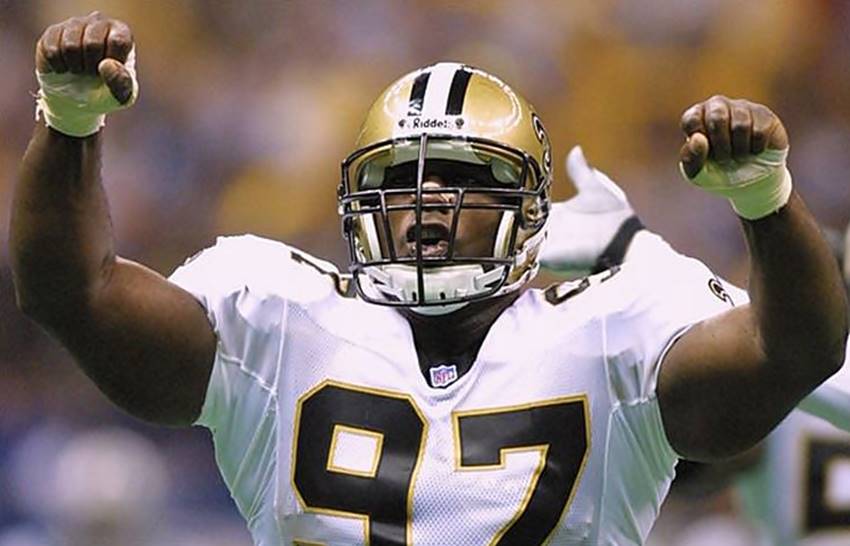 It is a thankless position.

Defensive tackles are asked to hold the point of attack, to occupy blockers and to occasionally make tackles.

Most of the time, they are doing the dirty work to allow linebackers and safeties, even defensive backs to clean up and get the glory of tackles.

Sometimes, a defensive tackle can serve as an outstanding pass rusher as well and gain glory through sacks.

Regardless of the role, defensive tackle is an important position on any defense. If you cannot control the line-of-scrimmage, you are likely going to lose.

While not big, Glover was fast and he was strong. He was also a great competitor.

Glover played five seasons for the Saints from 1997-2001. He played in 79 with 65 starts. Glover was a menace, recording 50 sacks, averaging 10 per season. He was in on 275 tackles. Glover forced 11 fumbles and had five fumble recoveries, along with an interception.

In 2000, Glover was simply tremendous. He led the NFL with 17 sacks, tying the New Orleans Saints all-time single season record of Pat Swilling. He helped lead the Saints to the NFC South title and first playoff victory ever. Glover was named first team All-Pro and went to the Pro Bowl.

Glover returned to the Pro Bowl in 2001 with another outstanding season but the Saints inexplicably let him get away, a huge blunder. All Glover did was go to the Pro Bowl the next four seasons with Dallas.

Glover was inducted into the Saints Hall of Fame in 2013.

Derland Moore played 13 seasons from 1973-85 with the Saints. Moore ranks tenth all-time in games played in franchise history with 170. Moore had seven fumble recoveries and one interception. Moore had 12 sacks but had many more before sacks became an official NFL statistic.

Moore was versatile. He played nose tackle in the flex defense for Dick Nolan, played the traditional defensive tackle spot and even moved outside to play defensive end for one season.

Moore was inducted into the Saints Hall of Fame in 1991.

Bob Pollard played seven seasons with the Saints from 1971-77.

Pollard was an iron man, playing in all 14 games in six of his seven seasons. Pollard played in 92 games overall with 90 starts. Pollard recovered 14 fumbles and returned a fumble for a touchdown.

Pollard had numerous sacks and played outside at defensive end for a large part of a couple of seasons as a versatile player.

Pollard was inducted into the Saints Hall of Fame in 1995.

Rowe was durable, starting every game (56) in all four of his seasons with the Saints. Rowe had three fumble recoveries.

Brian Young played five seasons for the Saints from 2004-08. He was part of the team which went to the NFC championship in 2006.

Young has been a coach for the Saints and Sean Payton since 2009.

Ellis started all 70 games he played in for the Saints after being drafted in the first round (seventh overall) in 2008.

He played an important role in the Saints reaching Super Bowl XLIV and winning it in 2009.

Ellis forced a pair of fumbles, had a fumble recovery, recorded 12.5 sacks and was in on 174 tackles.

Tony Elliott played seven seasons from 1982-88. He was part of the first winning season and first playoff team in Saints history in 1987. Elliott played in 84 games with 60 starts and had 13 sacks.

Elex Price played eight seasons from 1973-80. He played in 103 games with 68 starts. Price had six fumble recoveries and an interception, which he returned for a score.

David Onyemata and Sheldon Rankins have made their mark in four seasons and will continue to do and rise on this list if they continue to play the way they have played while Mike Tilleman played four years from 1967-70, starting every game (56) in his four seasons. Tilleman had four fumble recoveries.

Wayne Martin was a terrific player in franchise history and played tackle some but spent most of his career with the Saints at defensive end, which we will have for you tomorrow.