When you play defensive end in the NFL, you have to be responsible for holding your position, setting the edge, playing the run solidly and being able to rush the passer.

The position requires a vast set of skills which make it hard to find those who are capable of playing every down.

There are some who simply excel in all phases, some who are very good against the run and others who do a really nice job rushing the passer.

When you find a player who can do it all, you have a rare player. The New Orleans Saints have had three players, in particular, who fit that description perfectly.

Cameron Jordan has simply been consistently outstanding. He shows no signs of slowing down entering his tenth season in the league when he begins the season at the age of 31.

Amazingly, Jordan has played in every game since joining the New Orleans Saints as a first-round draft choice in 2011, the 24th pick overall.

Jordan is already second in franchise history, trailing only Rickey Jackson (115) with 87 sacks. Jordan has been on 463 tackles, including 113 for loss. Jordan has forced 10 fumbles and recovered 10 fumbles. He returned an interception for a touchdown in 2017.

Jordan has been part of five playoff teams with the Saints, playing in nine playoff games with 30 tackles, including 5.5 sacks.

Jordan has recorded 10 sacks or more five times, including in each of the last three seasons. Jordan had a career-high 15.5 sacks in 2019. 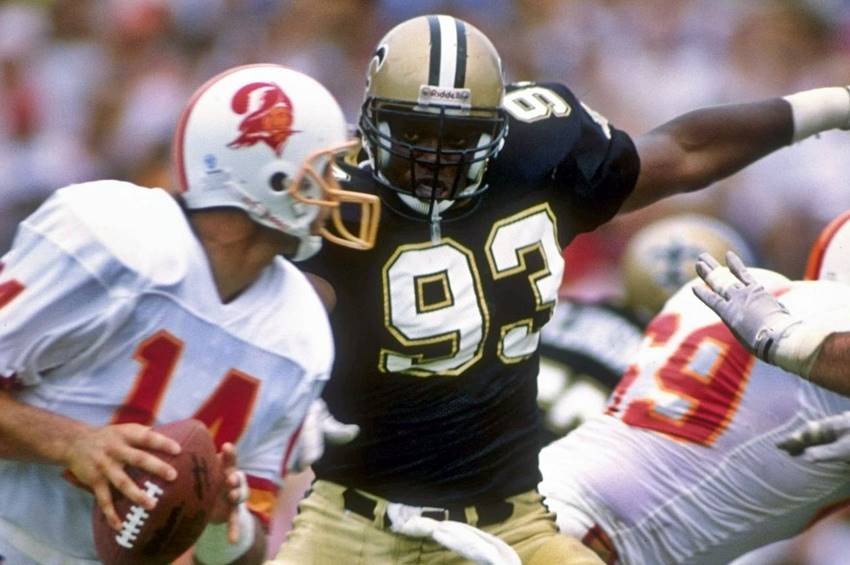 Martin, who played tackle at times, was in on 597 tackles, including 82.5 sacks. Martin forced 12 fumbles and recovered 13 fumbles. Martin had an interception as well. Most important, Martin could always be counted on. In 10 of his 11 seasons, he played in all 16 games and started every game he played in from 1990-99.

Martin is ninth all-time in games played in New Orleans Saints history. He is third all-time in sacks. Martin was named second team All-Pro in 1992 by one entity and was named to the Pro Bowl in 1994. Martin was part of playoff teams for three straight seasons from 1990-92.

Martin was inducted into the Saints Hall of Fame in 2003.

Will Smith played nine seasons from 2004-2012. Smith was in on 463 tackles, including 85 for loss and he had 67.5 sacks and recorded a safety. Smith forced 20 fumbles and recovered six fumbles. Smith had two interceptions.

Smith had 13 sacks in 2009, when the New Orleans Saints won Super Bowl XLIV, the most in a single season in his career.

Johnson made the NFL All-Rookie team in 1994.

Johnson had 13 forced fumbles and seven fumble recoveries. Johnson had 384 tackles, including 50.5 sacks. Johnson played in all 16 games four times. Johnson made the Pro Bowl in 1998 and in 2000, when he was named NFL Comeback Player of the Year as the Saints won the NFC South and went on to win their first playoff game in franchise history.

Johnson was inducted into the Saints Hall of Fame in 2007.

Frank Warren was a terrific athlete for his size.

Warren was inducted into the Saints Hall of Fame in 2002.

Jim Wilks was a 12th-round draft choice in 1981, not likely to make the team, much less make an impact. Wilks had different intentions and he made his presence felt.

Wilks played in 183 games, sixth most in franchise history, starting 154. Wilks had seven fumble recoveries and recorded 45.5 sacks. He played in all 16 games in eight different seasons.

Wilks was steady and solid throughout his career, a great draft pick. Wilks was part of four playoff teams, including the first ever in 1987.

Wilks was inducted into the Saints Hall of Fame in 2001.

Grant was in on 430 tackles, including 47 sacks. Grant forced 17 fumbles and recovered five fumbles. Grant played in all 16 games six times.

Grant started all 16 regular season games in 2009, when the Saints went on to win Super Bowl XLIV. He returned a fumble for a touchdown in 2002.

Bruce Clark played seven seasons with the Saints (1982-88). Clark played 113 games, starting 88 with the franchise. Clark had an interception and recovered nine fumbles.

Howard recorded 44.5 sacks among his 262 tackles. Howard twice recorded 11 sacks in a single season. Howard forced 16 fumbles and recovered 10 fumbles. Howard made the All-Rookie team in 2000, recording 11 sacks as the Saints won the NFC South and won their first playoff game in team history.

Elois Grooms played seven seasons with the Saints (1975-81). Grooms had a slew of sacks but the number is unknown as it was not an official NFL statistic until the year after he departed New Orleans. Grooms played in 99 games, starting 79. He had three interceptions and recovered seven fumbles. Grooms recorded a safety in 1979.