Saints beaten up front, plagued by turnovers in loss to Eagles

With an offensive line consisting of replacements Adam Throckmorton, Landon Young and James Hurst, with a backup quarterback looking the part, with receivers who could not get open enough, without Alvin Kamara and, of course, without Michael Thomas, the New Orleans Saints had little offense to hurt Philadelphia with.

In 2020, the Eagles beat the Saints 24-21 at Lincoln Financial Field, doing so by gashing New Orleans. Running the football very well with a pair of 100-yard rushers in Jalen Hurts and Miles Sanders, the Eagles racked up 246 yards on the ground against the Saints.

In 2021, the Eagles drilled the Saints 40-29 at Lincoln Financial Field, doing so by gashing New Orleans, running the ball down the Saints’ throats again to the tune of 244 yards rushing as once again, Dennis Allen and the Saints could not figure out how to defend Jalen Hurts and the Eagles run-first attack.

Then, you commit three crushing turnovers which turned into 17 points for Philadelphia and you have no chance.

The Saints were beaten and beaten badly up front on both sides of the football.

Here are my Quick Takes from the butt-whipping administered by the Eagles to the Saints:

**Taysom Hill was active after missing practice time during the week with a foot injury.

**With Ryan Ramczyk and Terron Armstead both out, Landon Young got his first start at left tackle while James Hurst started at right tackle.

**The Saints got the ball first, made one first down but had to punt and Blake Gillikin continued his brilliant rookie season with a 62-yard effort.

**Philadelphia opened with a no-huddle offense.

**Christian Ringo made a big stop on third-and-two from the Philadelphia 33-yard line, forcing a punt.

**Trevor Siemian then did not see T.J. Edwards, who dropped into underneath coverage and picked off a pass thrown right to him. On the play, Adam Trautman was wide open. If Siemian put air under the throw, it would have been an easy completion for sizeable yardage.

**Philadelphia capitalized, going 39 yards in seven plays, taking 2:20 off the clock with Jalen Hurts scoring on a 1-yard run to make it 7-0 with 7:17 to play in the opening quarter.

**The New Orleans did nothing, punted, and the Eagles drove 58 yards in seven plays, taking 3:52 off the clock with Hurts scoring on a 3-yard touchdown run to make it 14-0 with 2:02 to play in the first quarter.

We assure you that this was ruled a touchdown.#NOvsPHI | #FlyEaglesFly pic.twitter.com/xpXJO2zhzq

**All 58 yards on the drive were rushing yards.

**Gillikin punted the Eagles down at their own 4-yard line in another big punt.

**Ringo then came up with a huge play, stripping Miles Sanders of the ball and recovering it at the Philadelphia 6-yard line.

**Siemian hit Lil’Jordan Humphrey for a touchdown but Young was flagged for holding. He was earlier flagged for a false start.

**On the next play, Siemian bought time, took a big hit and delivered a perfect back-shoulder throw to Adam Trautman for a touchdown to cut the deficit to 14-7 with 13:01 to play in the first half. Trautman made a nice adjustment on the play.

**The Eagles added to the lead, driving 43 yards in seven plays with Jake Elliott nailing a 50-yard field goal to make it 17-7 with 9:27 to play in the half.

**The big play of the drive was a 33-yard completion from Hurts to Devonta Smith of Amite on a crossing route as he beat Marshon Lattimore.

**On the same drive, Marcus Williams made an outstanding play on a deep throw by Hurts to a wide-open Sanders. Williams covered enormous range to get there just in time to break up the pass.

**Gillikin then did it again, punting the Eagles down at the Philadelphia 4-yard line.

**Darius Slay then picked off a poor flat pass by Siemian and returned it 51 yards for a touchdown to open it up to 27-7 with 24 seconds left in the half.

THERE'S A REASON WHY THEY CALL HIM BIG PLAY#NOvsPHI | #FlyEaglesFly pic.twitter.com/GAEnuFSOoC

**It was the second career pick-six for Slay. The pass was intended for Deonte Harris. Slay read it all the way, the throw did not have much on it and Slay stepped in front, caught it and ran it in easily.

**It got much worse when Mark Ingram fumbled on a strip by Fletcher Cox with Edwards recovering at the New Orleans 41-yard line.

**The Eagles took advantage, scoring again on a 47-yard field goal by Elliott and it was 33-7 with 2:46 to play in the third quarter.

**The Saints finally scored again, driving 75 yards in seven plays with Siemian hitting Marquez Callaway on a 26-yard touchdown pass to make it 33-13 with 14:49 to play in the game.

**The pass for 2-points failed, the ninth consecutive failed 2-point conversion attempt by the Saints, an astonishing statistic.

**New Orleans got its first 3-and-out on defense and got the ball back and scored quickly, driving 39 yards in three plays, taking 1:10 off the clock with Siemian racing 17 yards for a touchdown, the longest run of his career, to cut the deficit to 33-19 with 12:33 to play in the game.

**Once again, another Saints kicker missed an extra point as Brett Maher missed badly to the right. You cannot make this stuff up.

**Adam Trautman, who had his best game as a pro, went up and made a great catch on the next drive but injured his left leg on the play.

**The Eagles then put an end to any dreams of a huge comeback, driving 74 yards in nine plays, taking 3:15 off the clock. Hurts turned another broken play into a 24 yards for a touchdown to put the game away at 40-22 with 3:15 to play in the game.

**It was the third rushing touchdown of the game for Hurts, the first time he has accomplished that in his NFL career.

**New Orleans completed the scoring, driving 75 yards in 14 plays, taking 3:14 off the clock with Siemian hitting Lil’Jordan Humphrey on a 4-yard touchdown pass to make it 40-29 with 45 seconds left in the game.

**Once again, Siemian had a very good fourth quarter, going 14-of-18 for 136 yards and two touchdowns in the quarter.

It was way too little, way too late.

Give the Saints credit for continuing to compete in a game where it appeared they might get blown away.

The win was the first of the season for the Eagles at home, the first victory at home since they defeated the Saints in 2020.

Hurts hopes to see the Saints very often in the future as he has completely had their number.

Trautman had his best game by far, catching five passes for 58 yards and a touchdown but went down injured.

Ingram rushed 16 times for 88 yards and caught six passes for 25 yards in what would have been a very good effort it not for the costly fumble.

Marcus Williams was outstanding in the deep for New Orleans while Ringo made a pair of plays and Marcus Davenport was a force. It was hard to identify any other New Orleans player who actually played well.

It is the first 3-game losing streak for the Saints since the start of the 2016 season, when the Saints went 7-9.

It does not get any easier.

A good but very inconsistent Buffalo team comes into New Orleans on Thanksgiving night with the Bills coming off a terrible performance at home in a 41-15 home loss to Indianapolis to create a matchup of wounded teams.

The Saints are doing what losing teams do consistently and that must change quickly. 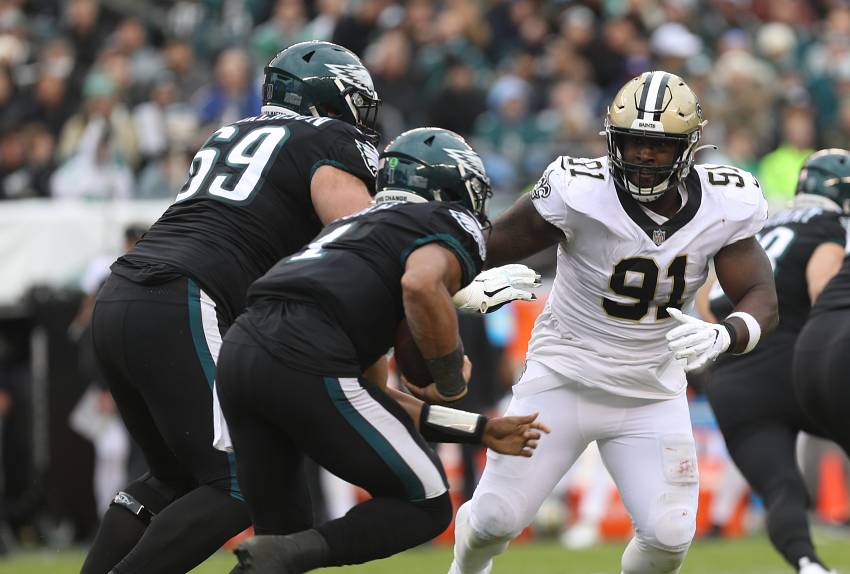 The New Orleans Saints went into their game at Philadelphia on Sunday with a clear list of priorities. Much did not go according to plan.