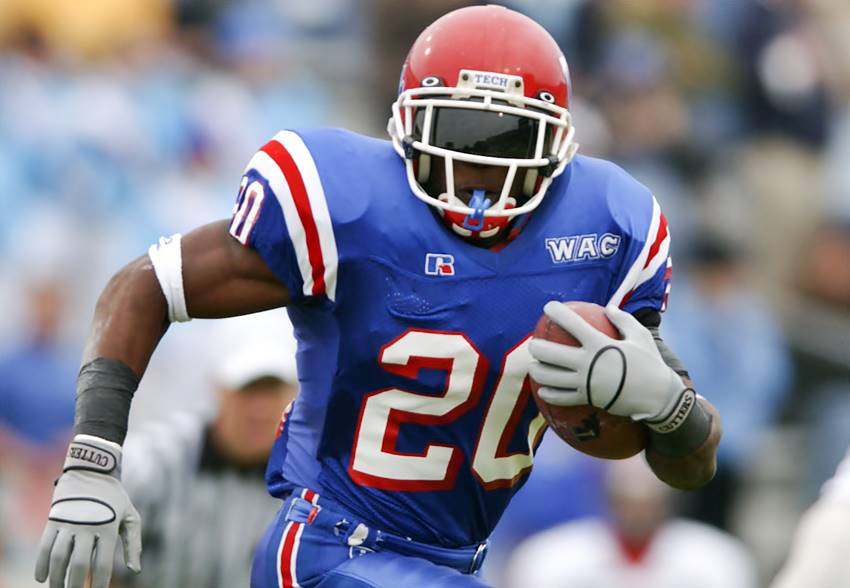 Balance on the football field, and balance between life and football.

And early on in his football career, it became a balance between life and death.

As Moats began his sophomore season at Bishop Lynch High School in Dallas, he came down with a staph infection in his leg that left both him and his doctors wondering if he’d ever walk, let alone play football again.
“The funny part is that no one really knows how that staph infection came about,” Moats said. “All we know is the end result — it was destroying my femur. Eating my femur alive. The staph was inside the bone. It was my 10th grade year. No one knew at that point what the outcome would be.

“I had a chance of losing my leg. No one knew if the staph would be able to be stopped due to the level of bone that had already been destroyed. There was probably 40 percent of my femur that had been eaten away as far as what the scans showed. But that was kind of the beginning of shaping the runner, I guess you could say.”

Eventual recovery from the infection led to Moats focusing on building what would become one of his biggest weapons — his thighs.

“A strong base doesn’t hurt, you know?” Moats said. “Balance and being able to keep your strength going as you move are important to a runner.”

But it wasn’t an easy fight to get back onto the football field. Moats didn’t finish his sophomore season in high school; instead he underwent multiple surgeries and was told he would probably never play football again.

“I was preparing mentally to never play football again,” Moats said. “My coaches were supporting and pushing my education. Whatever happened, I was going to keep moving forward. I had to come with grips with not playing the game any more and being a young kid — not really understanding life — it was hard. But I had to learn that football isn’t everything, or even the most important thing, in life. That’s hard anytime, but especially hard for a kid.”

It was a life lesson Moats had to learn was possible — but ultimately wasn’t his future. Instead, he continued a career that has landed him in the Louisiana Tech Athletics Hall of Fame.

He returned to the football field as a high school junior, and by the time it was over, he was known as an excellent two-sport athlete. He ran a 10.9 in the 100-meter dash for track. In football, he won all-state (private school) honors, the Dominic Norman Award – given to a player who demonstrates excellent leadership — and the Dave Campbell Texas Player of the Year. He rushed for a school record 4,782 yards and 56 touchdowns. Moats was also named Offensive MVP of the DFW All-Star game following his senior season at Bishop Lynch.

Along with that came college recruiting.

“I didn’t know anything about Louisiana Tech,” Moats said. “I’d never really heard of it in all honesty. I visited schools like Texas A&M, Colorado, Colorado State, Texas Tech and SMU. I actually wanted to go to SMU at the time because it was right down the street from my high school.”

There was only one problem with that.

“They didn’t want me,” Moats said, laughing, about SMU. “So eventually Louisiana Tech found me and recruited me. I visited Tech and to be honest, I wasn’t sure at first. After the injury my mindset was different. I loved football, but I was always trying to find balance. The educational component was important, too. I wanted to be an engineer and in the end, that’s how I chose Tech.”

Jack Bicknell, Tech’s head coach at the time, knew Moats would be special even before he became a Bulldog.

“I had no doubts about him at all,” Bicknell said about recruiting Moats. “The scary thing for me was someone sneaking in and taking him away at the last moment. If I recall, Oklahoma State started showing some interest and that’s what I was panicking about because I just thought he was going to be a great player and obviously that’s the way he turned out.”

At 5-foot-8-inches, Moats was shorter than many college running backs. But at 210 pounds, he was still a punishing runner.

“I’ve never been a guy that had to have a tall running back or this or that,” Bicknell said. “I remember thinking to myself that Barry Sanders isn’t very big either. I thought the world of Ryan when I met him; just a wonderful human being with a great smile. I built a relationship early with him and when ended up getting him, thank the Lord.”

Moats calls his freshman year at Tech a “whirlwind,” and admits a great college and pro running back very similar in style and stature inspired him.

“I’ve always been a little bit obsessed with Barry Sanders,” Moats said. “That was my goal as a runner, to be like Barry Sanders. The best runner anyone has ever seen. The world knows.

“It’s all about balance. After the injury my mind converted totally. It was all about the person,” he said. “Barry was a great athlete, but he was a greater person. He was able to balance his game and his life. And that gave him peace within the game he played. I was the same way. I found peace. I never was a big cheerleader and didn’t do a lot of celebrating. I’m a calm and collected person, like Barry Sanders. I was mimicking what I thought would make me the best player I could be.”

Moats didn’t play all that much as a freshman before getting a chance to take over as a sophomore.

“As a freshman I was behind a great back in Joe Smith who I learned a lot from,” Moats said. “I played some special teams and things like that, but that year was a learning experience. Then once my sophomore year came it was time to go to work.”

Moats said that meant focusing full-time on football and classes.

“I was looking for the little nuggets that could turn me into a specialist at my position — to know what makes people tick,” said Moats. “What the offensive line did. How to move people as a runner. How to move defenders in position to be blocked by my line. How to help my line be better blockers. I knew at the end of the day it was about what the guys in front of me can do and what we can do together. Can we move as one? That made building that relationship with them important.

“I learned early on that a running back’s relationship with his offensive line is crucial,” he said. “You’ve got to be their guy. That way, when you go into a game, they’re willing to die for you, basically. They’re giving all they’ve got for you because they believe in you and that if they give it everything they have, you can make it work — make the rest happen.”

Moats made it happen as a Tech sophomore. After rushing for 38 yards as a freshman, Moats ran for 1,300 yards and 10 scores his sophomore season, averaging 9.3 yards per carry.

“His running style I think is based on natural instinct,” Bicknell said. “When it comes to running backs, the great ones just have it. The thing about Ryan, while he’s not the tallest guy, he certainly wasn’t little. He’s a powerful, powerful guy. He made a lot of plays where defenders thought they had him and he just powered through them. He had strong, strong legs and a strong upper body. He was one big muscle. He had the vision to make the cut but then if someone was hanging on him, he just powered right through them.”

Early on during that sophomore season at Tech, starting quarterback Luke McCown worried that Moats might not go full throttle the way he needed to.

“I really don’t think he knew how good he was at first,” McCown said. “He was just a little tentative. But then you started seeing that fire in eyes as he realized what a weapon he could truly be.”

Moats said respect from his Tech coaching staff helped in that aspect.

“Coach Bicknell was a great coach because he allowed me and other players to have input,” Moats said. “So many players today don’t get that chance. They aren’t allowed to have input. Coach Bicknell let me ask questions and talk things out. In practice he would let me run a stretch play five times in a row so I could see all the different variations of how the play could happen and what made the defense tick. How did that stretch make them move? I would focus on remembering all that and trying to use that to my advantage during games.

“So many players today that don’t have any input. But I was allowed to help my coaches create a game plan. That allowed my to own my talent and be confident in the system. That made it easy to give it everything I had.”

Moats turned things up as a junior, rushing for 1,1774 yards and 18 touchdowns on 288 carries. He finished his Tech career with 3,112 yards and 28 touchdowns on the ground while adding 48 receptions for 441 yards and two more scores.

His name is riddled throughout the LA Tech record books. He ranks No. 4 in career rushing yards, No. 5 in career rushing TDs and No. 10 in career carries. He is No. 1 in 200-yard rushing performances with seven, including the memorable 236-yard, 4 TD effort in a 28-21 win over No. 18 ranked Fresno State at Joe Aillet Stadium in 2004.

Five of his 200-yard rushing performances came during his junior season, including back-to-back 257-yard efforts in wins over Nevada and UL-Lafayette.

“I never held back,” Moats said. “I believed I could go 100 miles an hour and still make any cut I wanted to make. It’s about believing you can make those cuts. Some running backs don’t do that, so they end up holding back a little bit. It’s got to be all out. I knew that my ankles and legs could take it. I know it sounds crazy, but I believed I could circumvent gravity.

“A military jet pilot believes he can do anything with his plane — turn it and twist it and make it do anything he wanted it to do,” he said. “I believed I could do that with my body. I could fit through any hole, make any hole move if I wanted it to …. win any battle as long as I was able to manipulate space. A lot of running is believing.”

Moats was drafted by the Philadelphia Eagles in the third round of the 2005 NFL Draft and spent two seasons as a Eagle and two seasons as a Houston Texas before closing out his career with a short stint as a Minnesota Viking. He totaled 831 yards and eight touchdowns on the ground while adding 20 catches for 127 yards and another score.

“I had a great NFL career for the most part,” Moats said. “I never really had a goal to go to the NFL, to be honest.”

These days Moats spends much of his time raising the children he’s had with wife Tamishia Moats — sons Ryan II (8) and Royal King (2), and daughters Riley (8), Robin (4) and Reign, who was born in September.